Inspired By is a series examining the creative process and perspectives of the people who influence the Apiece Apart studio. We’ve long followed the work and photography of Valeda Beach Stull — whether through her professional shoots or off-the-cuff snapshots, she has a way of hinting of a life lived with open eyes, curiously examining and discovering beauty in unexpected places. Valeda, who for years lived in Berkeley, CA, made the move in 2014 from the Bay Area to a farmstead in Woodstock, NY, a shift from city life to truly living off the land, planting roots in a handmade house on three acres in the Hudson Valley.

Valeda in her own words:
My career has definitely had its ebbs and flows across a number of disciples over the years, but always involves hard work and dedication regardless of the job itself. I’ve held positions as a researcher, an ESL instructor, an interaction designer, and now I work as a photographer. I am also formally studying herbalism, which has been in the making after a few decades of casual, informal study. What binds all these pursuits is a very sincere interest in people, how they work, and the desire to help make the world a better, brighter, more thoughtful place.
Even though my partner is from Los Angeles, the East coast is significant to both of us since it’s where our families are originally from. Upstate seemed right since we didn’t want to be in the city but wanted to be proximal enough to visit as much as we wanted without too much trouble. We found our house online and flew out to see it within a few weeks…After looking at properties in California for so long we were floored—it was half the price with ten times as much land and living space and we just went for it.
[Since moving here,] it sounds strange, but the biggest change is that I find myself staring out the windows, into the trees, a lot. At times it feels like a mildly catatonic behavior, but now I understand it as a kind of somatic or sensory meditation. I also wax and wane with the four seasons more than I ever could in California; introspection in the winter, expansion and spontaneity in the summer. I love how transitional autumn and spring are, they allow me to cycle through interests, inspirations, and attitudes quickly.

Fruit Galette cooked on a gas grill
Regardless of the month or the season we are always up to something in the kitchen: cooking, baking, preserving. The kitchen really is the hearth of our home. I make a lot of tarts and galettes year-round, and I’m a purist and stick to an all-butter crust for my pastry. I use Alice Water’s dough recipe, with one minor addition: I add a little cold apple cider vinegar to the ice cold water portion of the recipe (I learned this from my friend Emily of Nothing in the House). For the filling I use what’s fresh or whatever I have on hand. When you visited I had just bought some beautiful plums at Montgomery Place Orchards across the Hudson (our plums are still growing!), so I used those. Other favorites of mine for filling are rhubarb with a scraped vanilla bean, wild black raspberry, or apricot with fresh tarragon.
FOR THE DOUGH
(makes enough for 2 galettes or 1 double crust tart), you’ll need:
2 cups unbleached all-purpose flour (or a delicious modification is to use
1½ cups all-purpose and ½ cups rye flour)
1 teaspoon sugar; a quarter-teaspoon salt;
6 ounces unsalted butter, chilled, cut into half-inch pieces;
6½ tablespoons ice water mixed with
1½ teaspoons of chilled apple cider vinegar
FOR THE FILLING
1½ pounds fruit, in this case ripe plums, pitted and halved or quartered; cane sugar to taste, depending on how sweet you like it and how ripe the fruit is…I find that 1/4 to 1/3 works well with stone fruit like plums, apricots, or peaches (more if you are using something like rhubarb, less if you are using apples);
1 tablespoon flour;
1 tablespoon unsalted butter;
juice of half a lemon;
zest of one whole lemon
FOR THE EGG WASH
1 egg yolk mixed with 1 tablespoon heavy cream;
2 teaspoons cane sugar for sprinkling
For the dough, combine the flour, sugar and salt in a large mixing bowl. Add half the butter into the flour mixture, mixing with your hands until the dough resembles coarse cornmeal. Cut in the remaining butter with your hands (or you can use a pastry blender), just until the largest pieces are about the size of marbles. Dribble the ice water & cold apple cider vinegar mixture into the flour mixture in several stages, tossing and mixing between additions, until the dough just holds together. Toss the mixture with your hands, letting it fall through your fingers, but be sure to not overwork the pastry! Don’t try to dampen the dough evenly, instead you want it to look rather ropy, with some dry patches. Once the dough is just pulled together, divide it in half and gather each half into a ball. Wrap tightly in plastic wrap or Ziploc bag, pressing down to flatten each package. Refrigerate for several hours or even overnight before rolling out. (Dough may also be frozen for a few weeks.)
While the dough is chilling, prepare your fruit. Toss the fruit, sugar, flour, unsalted butter, lemon juice, and lemon zest for the filling. Set aside (do not refrigerate). After the dough has chilled, roll the flattened ball into a 14-inch circle on a lightly floured board or countertop; the dough will be a little less than 1/8 inch thick. Move the dough onto a baking sheet before returning it to the refrigerator for a final ½ hour chill. Preheat gas grill to 400 degrees fahrenheit (205 degrees celsius). Remove the rolled out dough from the refrigerator and arrange the fruit in the center of the dough circle (retaining any liquid or excessive juice from the fruit for another use…I add mine to sparkling water), leaving a border of about 2 inches. Fold in the sides of the dough to cover the fruit partially, making sure not to leave any valleys where the fruit juice can leak out. Brush the egg wash over the pastry edges, and then sprinkle with the cane sugar. Move the galette to the gas grill, and bake it with the lid closed until the crust has visibly puffed and baked to golden brown and the juice from the fruit is bubbling inside, about 20 to 35 minutes depending on the efficacy of your grill. Enjoy. 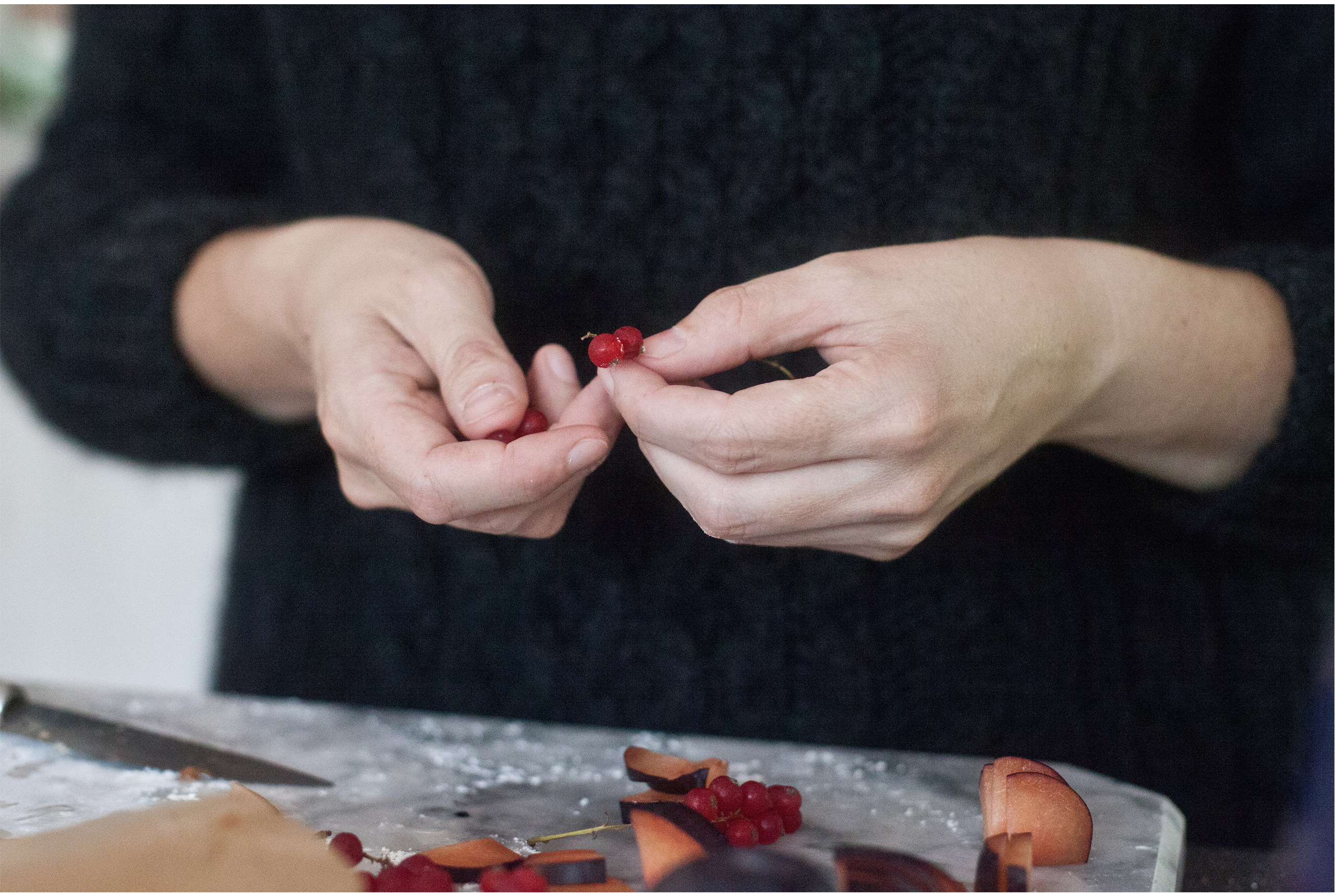