Soba noodle maker, food industry advocate, teacher, writer, film industry veteran: the diversely talented Sonoko Sakai has perhaps had an atypical career trajectory, but it’s one that has provided multiple outlets for creativity, seeing the world, and having a voice. Born in New York but raised around the world — Tokyo, Kamakura, Mexico City, San Francisco, and Los Angeles — Sakai grew up in a large Japanese family of seven who shared a love of cooking. After working in the film world for 25 years, she shifted her focus back to the art of Japanese cooking, studying soba making in Tokyo and fueling her passion for the sustainable production of heirloom grains. Today, along with making noodles, writing cookbooks, and teaching workshops, she operates Common Grains, a cultural project devoted to educating people about grain traditions. Along with her husband, the sculptor Katsuhisa Sakai, Sonoko now splits her time between Highland Park, Los Angeles, and Tehachapi in the high desert east of Mohave. We visited Sonoko at home in LA to watch her at work in the kitchen and talk more about her daily life. 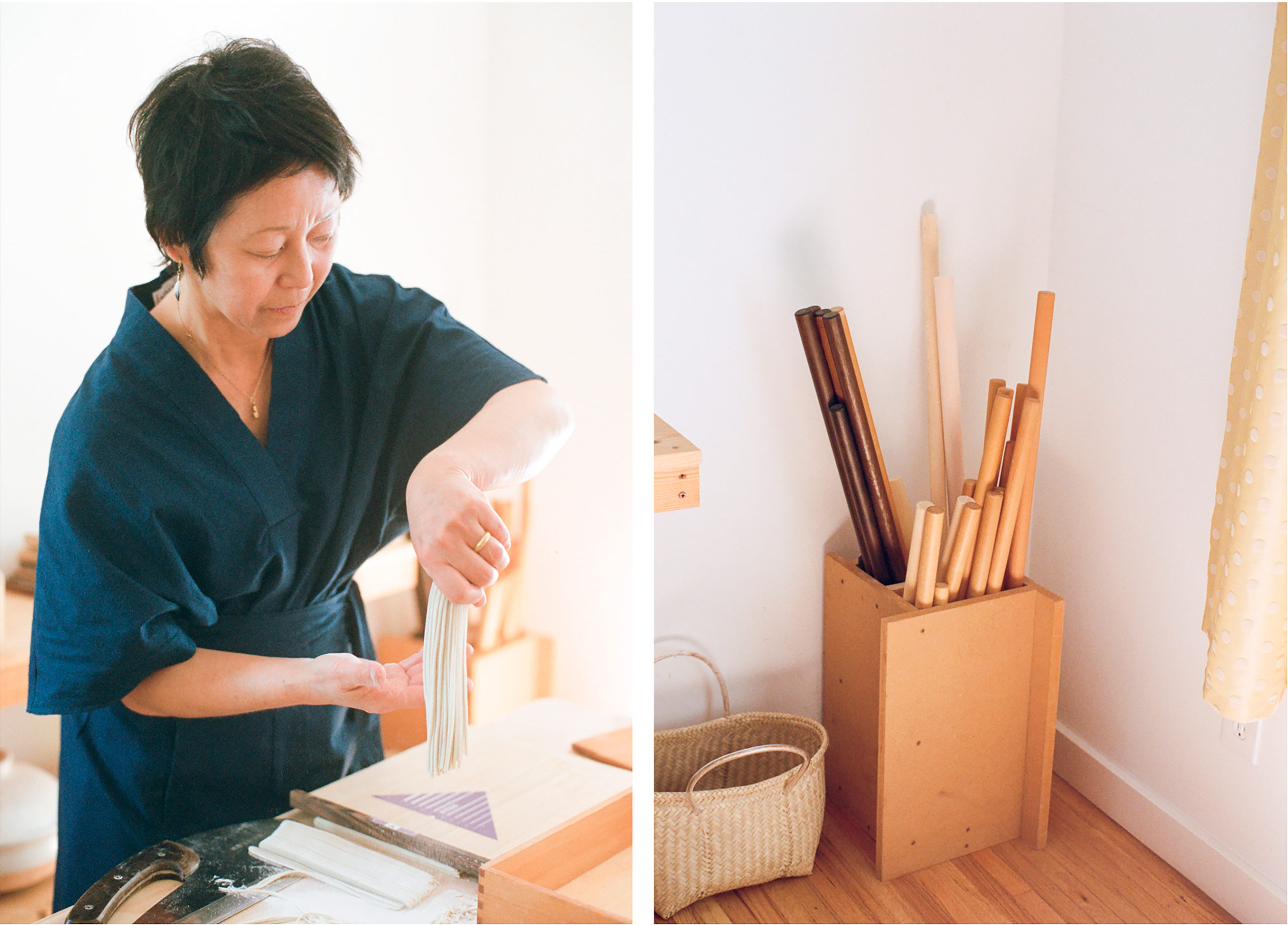 In brief: how did you end up where you are today?
In college, I wanted to pursue a path in the international arena, doing work related to education. While in graduate school at UCLA, I worked as a darkroom assistant for Lou Stouman, an Oscar-winning documentary filmmaker and professor at UCLA Film School. I also cooked a lot at Stoumen’s film lab, which caught his attention. He encouraged me to do photography and also write a cookbook. I have had many wonderful mentors in my life, but he was the first person who helped me cultivate an eye to see things through the camera and a voice to tell a story. My first cookbook, The Poetical Pursuit of Food: Japanese Recipes for American Cooks was published in 1986.
After school I went onto pursue a career in the film world, as a seller and buyer in the international marketplace, and later as a film producer. But I always kept one foot in the food world: I did food writing on a freelance basis for the Los Angeles Times for nearly a decade. After working in the film world for nearly 25 years, I decided it was time to transition myself into food while I still had some stamina. I didn’t consider going to culinary school but instead I went back to Japan to study noodles, working with several artisanal soba masters in Tokyo. Today, I work as a mobile soba noodle maker and cooking teacher. Through my passion in grains, I began working with farmers, chefs, and scientists to restore a variety of heirloom grains in Southern California. I am also working with scientists at Washington State University in Mt. Vernon to grow and mill buckwheat.
Do you think having a filmmaker’s eye for contextualizing ideas has played a role in translating the importance of sustainable grain farming for a wider audience?
No matter what work you undertake, whether it be food or film or anything else, there are two things to consider: The seed and how you nurture it. Farming and filmmaking have many parallels. I always looked for a good story, which is like looking for a good seed. Then I made sure it was handled by the right people. In farming the same things apply. If you really care about food, you have to care about the seed and the farmer who grows it and the people who process it down the line. 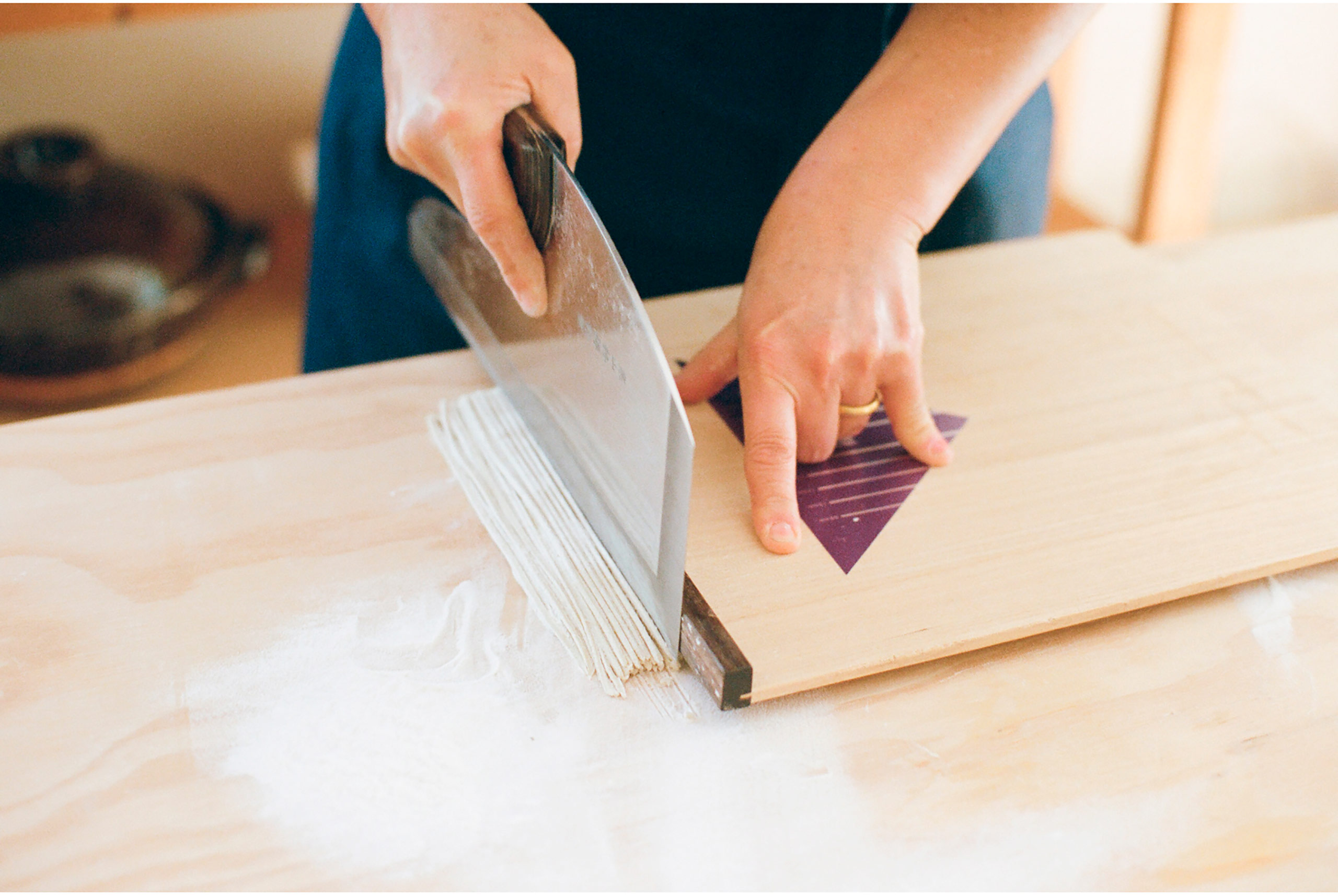 How have water issues in Southern California affected your work or process?
We have a serious drought in California. I am working with an almond farmer in Wasco who is thinking about giving up his almond farm, because production has been so low during these past few years. There is just not enough water to keep the almond blooms alive to the point that they can bear fruit. Last year, he began growing Sonora wheat, a drought-tolerant ancient wheat that once thrived in the Southwest region of the US. Several other local farmers in Southern California are doing the same. They are introducing heirloom grains as part of their rotation crop to keep the soils healthy and to have an extra crops. This is a positive movement towards sustainable agriculture; I am learning a lot from listening.
Can you share any new-to-you (or newly of interest, perhaps) grains?
Adzuki beans and black beans to make Japanese desserts. Growing beans benefits the health of the soil, so I am all for cooking with beans.
Can you share the schedule of a typical day in the life?
I split my time between L.A. and Tehachapi (east of Mohave in the high dessert).
When I am in L.A., the first thing I do is make coffee and feed the cats. I water my vegetable garden but since we have a serious drought, I use mostly gray water, meaning I transport buckets of water from my kitchen and tub up to the garden. I get a good morning workout. The rest of the day is spent on things related to food (cooking, teaching, testing, prepping, shopping for food) and desk work. I do yoga in the evening before supper. I like to relax over a glass of wine.
I have a different routine in Tehachapi. I take the bus and train to Lancaster. My husband, who spends most of his time there, picks me up at the bus stop in Tehachapi. We sometimes go straight to the Honey Wagon local brewery and have a beer together and go back to the ranch before sunset. We take a walk around the ranch with my 15-year-old dog Ana and feed the horses. My husband prefers to eat a big breakfast and lunch, and skip dinner, so during the day, I am busy cooking and doing my own work. I love the wildflowers, the clouds, the oak trees, the deer, the llamas, and the horses. It’s a therapeutic place. 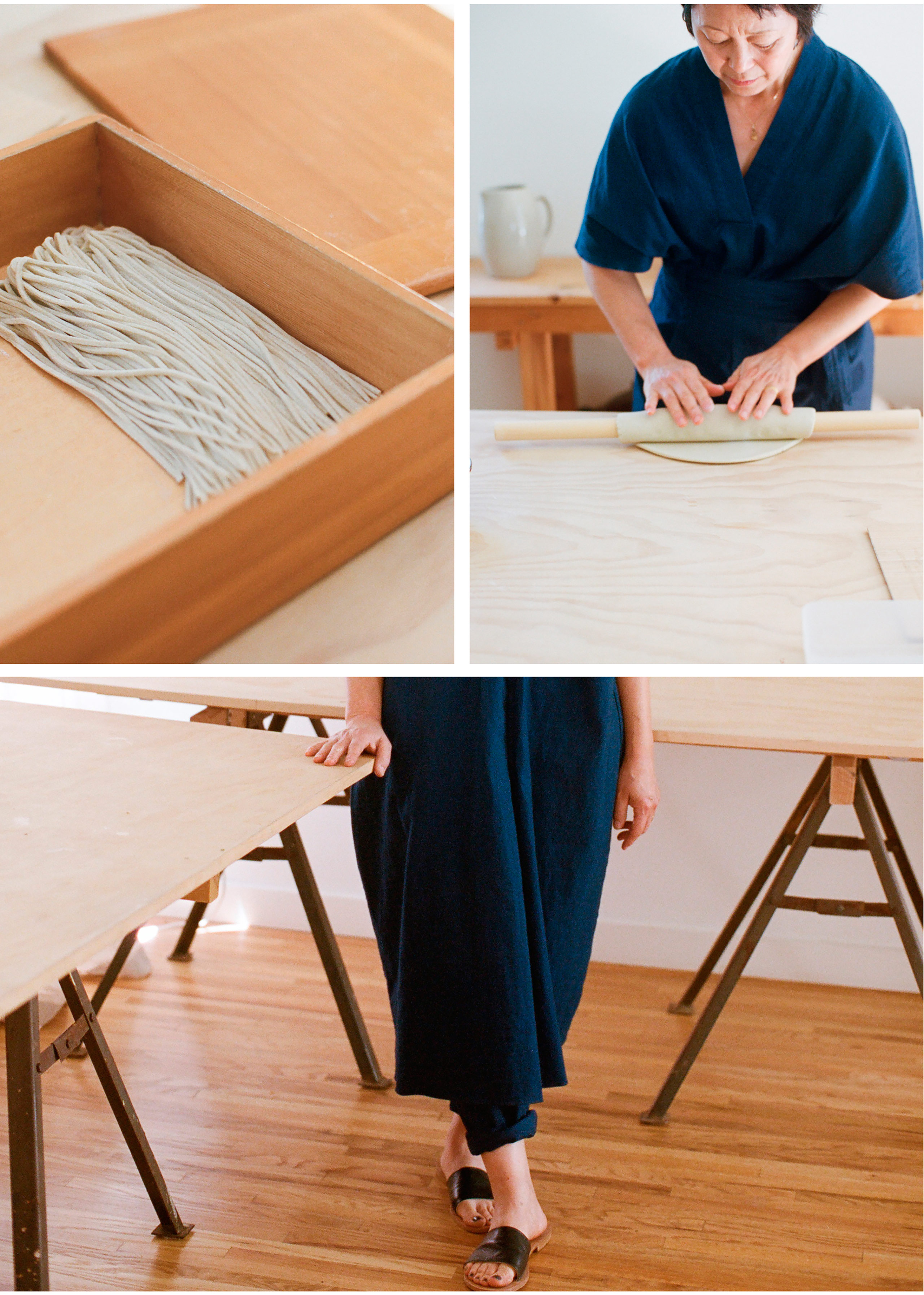 Please describe your last month in a word.
Focused
What do you make for a dinner party?
I like to cook a variety of cuisines but I often include something Japanese in the menu.
Summer Menu:
Soba chips with sea salt and chili pepper.spices
Hijiki, Shitake Mushrooms and Carrot salad on baby lettuce
Grilled Yakitori Chicken and Scallions with Yuzu Kosho pepper
Cold Handcut Soba Noodles with herbs and dipping sauce
Grilled rice balls with Soy Koji Cucumber and Watermelon Radish Pickles
Agar agar jelly and fresh stone fruit and berries with Okinawa brown sugar syrup 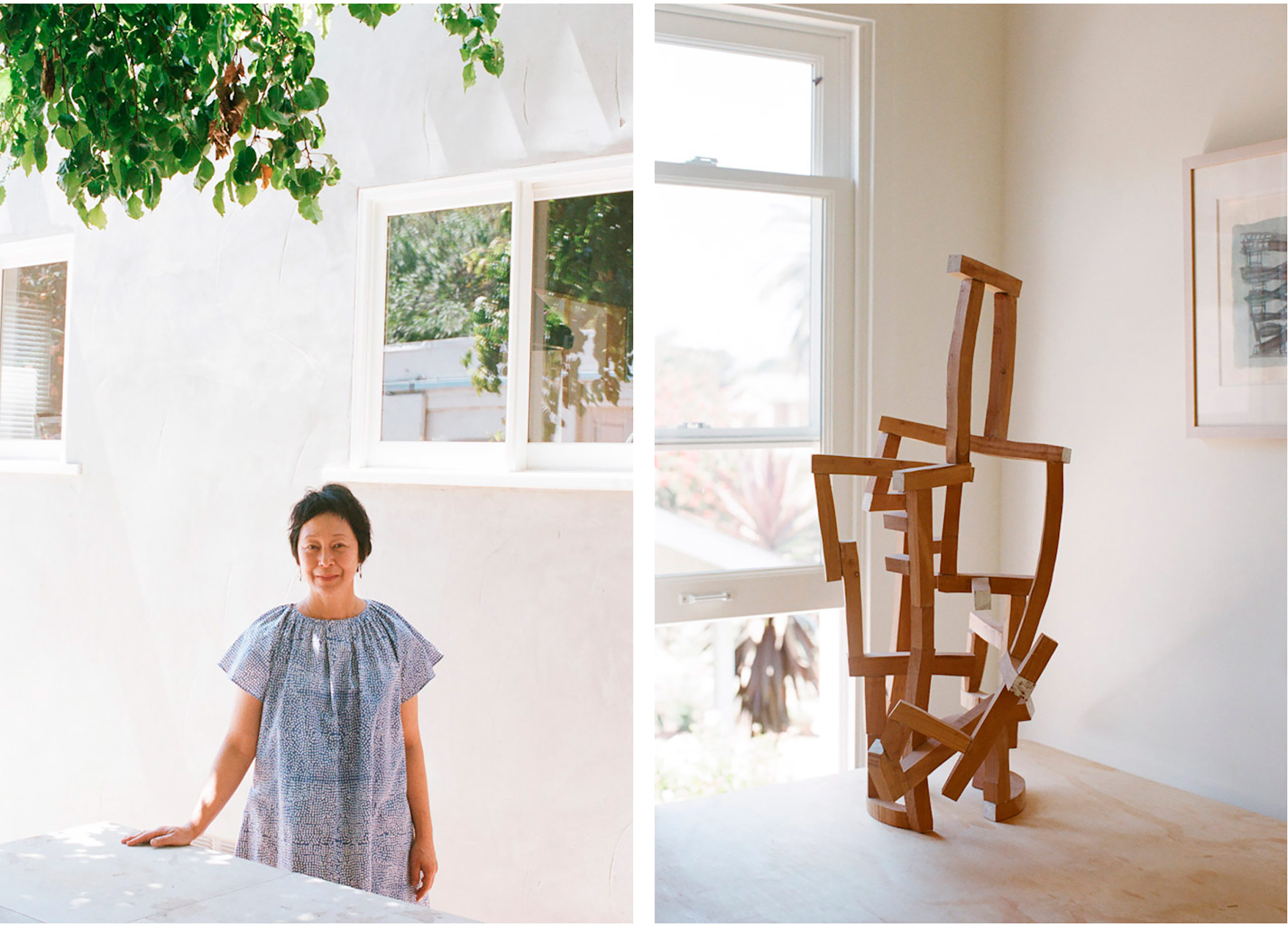 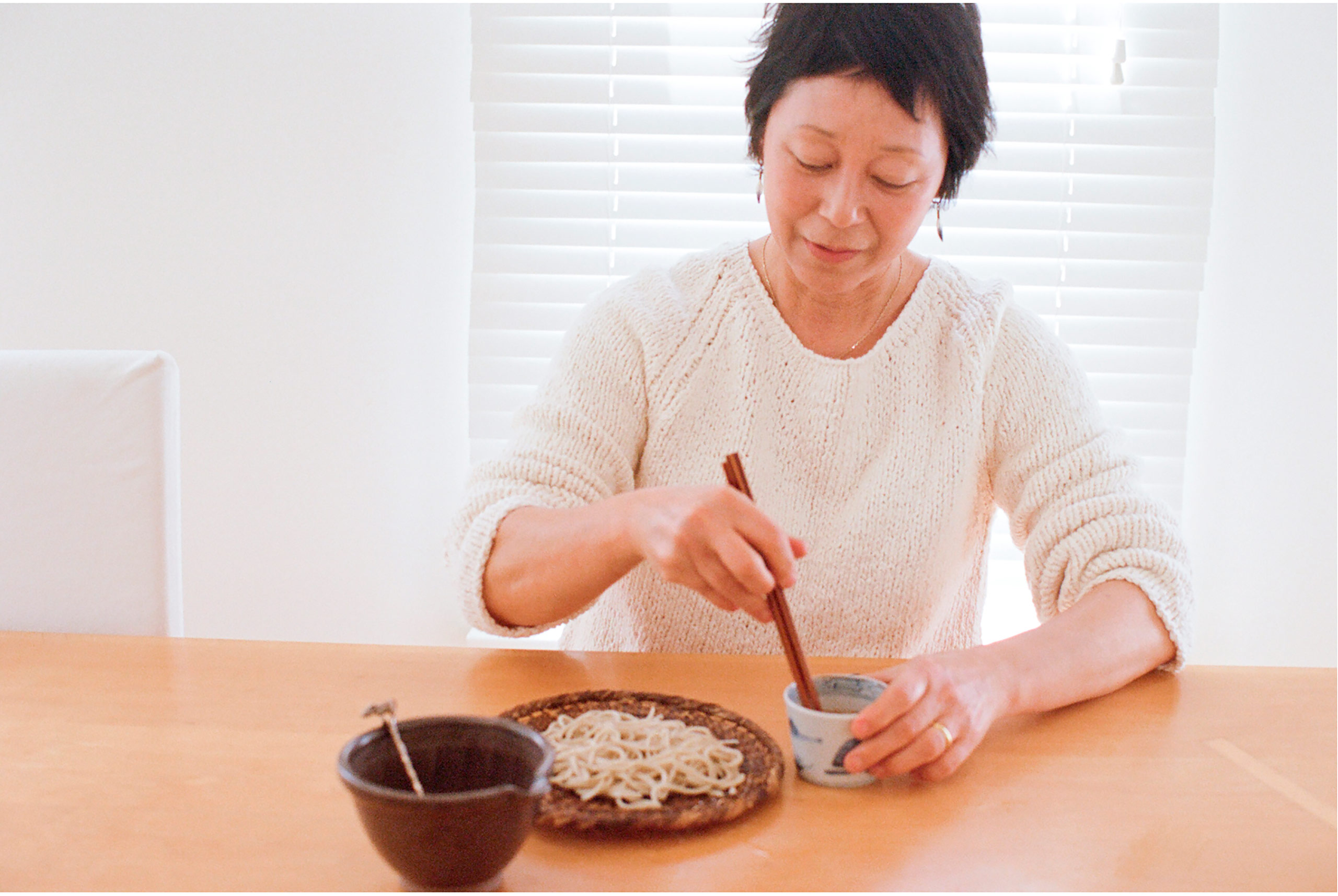