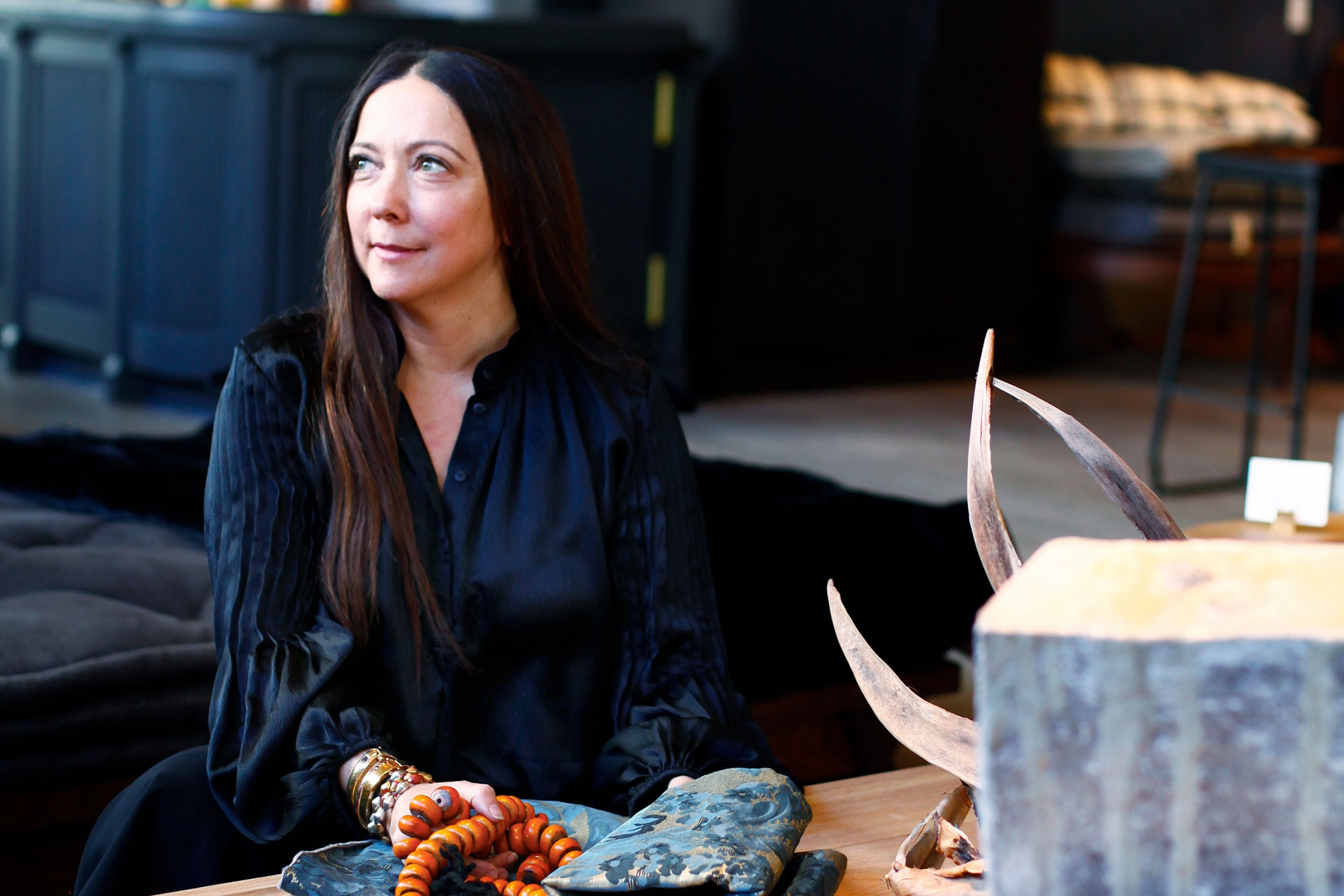 Robin Standefer is the co-founder of Roman and Williams, a New York based interior design firm incepted by Standefer and her husband, Stephen Alesch. Together, the duo have designed a portfolio of spaces ranging from celebrity residencies to the Ace Hotel, from April Bloomfield’s The Breslin to a current collaboration redesigning the Metropolitan Museum of Art’s British galleries, scheduled to open in 2019.

Standefer got her start in production design: she apprenticed with Robert Mapplethorpe, sourced paintings, spent years on sets and locations before carrying over set design into permanent spaces. Most interestingly (to us!), Robin cites the places she lives — both in New York City and in Montauk — as the most pure reflections of who she is and how she regards design, art, and craft. Late last year, the couple opened The Guild, a specific sort of flagship store merging disciplines and ideas: it’s a destination to purchase a nineteenth century sculpture but also a cup of coffee; it’s a place to whiff a candle and admire flowers arranged by New York florist Emily Thompson; it’s a showroom, a shop, and restaurant, all assembled in livable, inspiration-inducing vignettes.

It’s here where we met and photographed Robin, and spoke with her about embracing beauty, allowing space for vulnerability, and communicating with the senses.

Interview by Leigh Patterson, Photos by Tim Hout
Photographed at The Guild in New York City 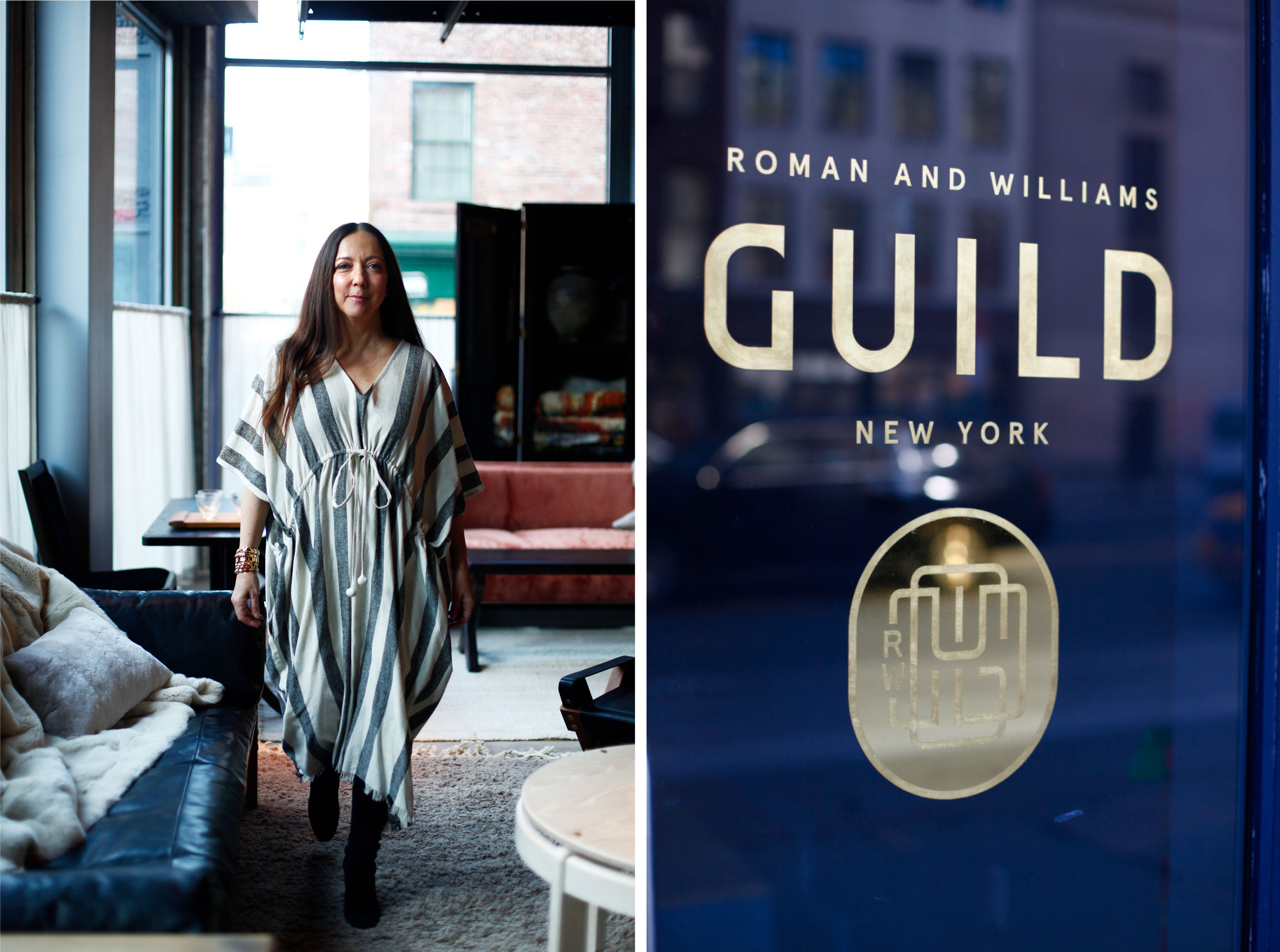 Can you share a little more about yourself, your upbringing, and background — what would give a stranger new to your work context into how you have become the woman you are today?
I was raised in Manhattan — being raised there is a gift, but it also causes you to always look outward; it’s about constant engagement, curiosity, discovery. I think growing up in New York in the 70s really shaped me…that exciting, energetic day-to-day engagement.
At the same time, I didn't have any place to really escape except my own brain. That creativity, that space — making something out of nothing in your bedroom, or [deliberately seeking out] quiet — was something I always looked for. I went to Montauk as a kid, and it was a [version of] Montauk that’s very different than it is now: it just was this raw and beautiful, natural place. On that northern tip of Long Island, you’re right in the middle of the ocean, and it creates a specifically evocative landscape. Now, we [Standefer’s husband Stephen Alesch] spend the weekends there, and stay through Monday, which has become a special, precious day for both of us. Mondays there are absolutes; they are so necessary. It’s been in Montauk, on a piece of land, gardening and really engaging with and forming the landscape, that’s had a really big impact for me. [It’s allowed] the ability to be creative and to have some private space to do so, but also to learn. You want to believe you put those seeds in the ground, and that they're going to flower and bloom. And yet there's so many reasons why they don’t: the animals ate them or the cold came. It is so humbling to say, "You are not in control."
We’ve been so struck by how sensory-driven your work is … What are the emotions you look to employ in a project? Does emotion lead the design?
There's nothing more sensory to me than what’s in nature — Whether it's a willow you're weaving into a basket, or a plant you're planting to create a purple meadow like what I’ve grown in Montauk, or the oak tree you're going to carve into something…all those things are from the ground. There's a message. To me, the natural step that I take is to look at the hand. How does the hand take those elements and make them into something? Our work is about taking that elemental material, and devolving it. Because it starts with so many living objects or living finishes or natural products, I think that they are inherently sensual. I think synthetic things are less sensual.
In Montauk I have a ceramics studio. I'm an absolute amateur, but just getting your hands in that clay and making something is very powerful, especially when your eye outpaces your hand. I’m someone who has built a world around my eyes, and then I try to go out and actually make a simple pot and it just collapses. So to go from that to meeting with and critiquing the work of these exceptional Japanese ceramicists…it’s so interesting and important to both develop your eye and work with with your hands. It’s given me a new language of communication. 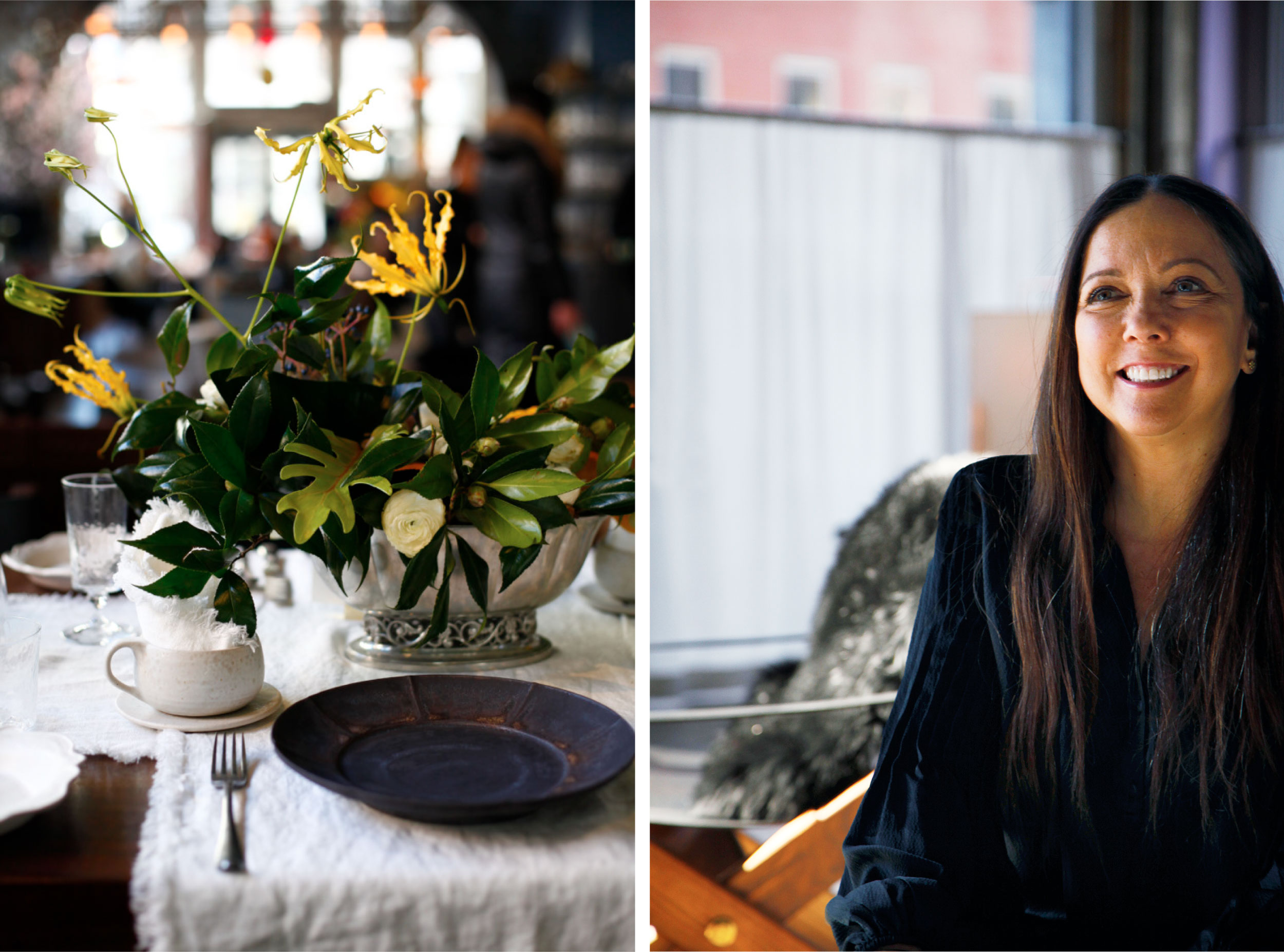 How do you see design as a point of connection?
I love the word tension or voltage: this idea of the dialogue between objects. It’s a language, shaping the storytelling that elevates the reality of your day-to-day…I just believe that there's such an opportunity for people to engage with and really use objects in their lives that are elevated, and that are created to last. That's what this is really about for me. When I got into this, I didn’t even know what “design” was — but to me it is only about connection. It is about the symphony that occurs when everything works together.
There is a vulnerability that comes in a love of beauty: what have you learned about yourself and a permission to be vulnerable?
Beauty is something I think a lot of 20th century architects and designers and creators and artists thought of as being unintellectual … they rebelled against it. You do have to be very vulnerable to be able to say “beauty first.” It's often made to seem unintelligent, unacademic — like beauty is only about your eyes, it’s a spontaneous reaction with no theory or concept behind it. So much of my life, from ages 15 to 50, has been disproving this. A sensual, beautiful environment can also be one that tells an important intellectual story; they are not exclusive, they're inclusive. 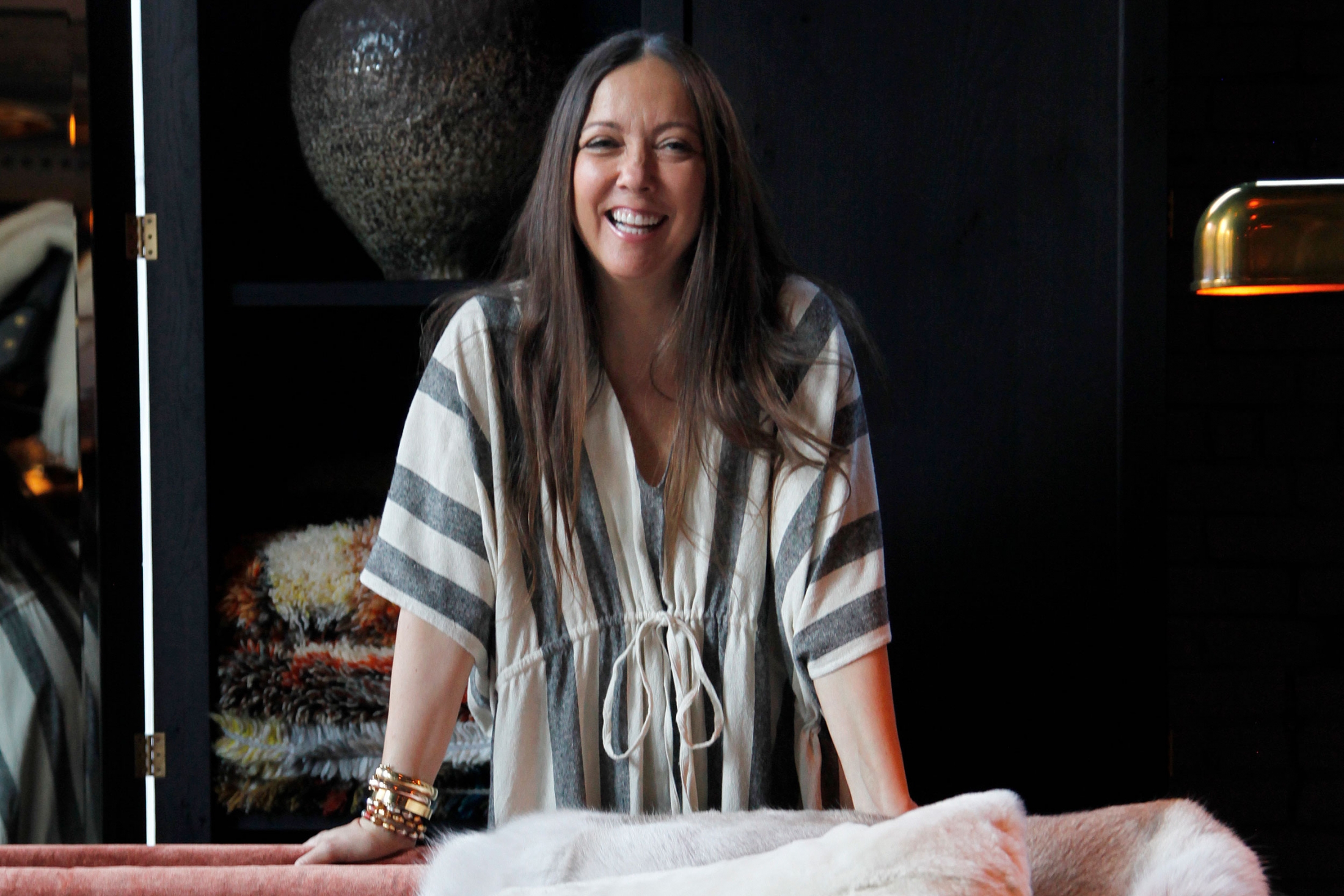 “We tell ourselves stories in order to live” — what is/are the current story/stories you are telling to yourself, about yourself about your present?
I went to Cuba about a year ago, and none of my “devices” — my phone, computer — worked while we were there. Sad to say, you do have an unbelievable, acute withdrawal. It really told me a story about myself I didn't like very much. I can't say I did enough about it, admittedly, but the awareness was a start. That’s when I created my ceramic studio, my garden. It was the desire to create experiences that were completely enveloping. You have to do something that captures your imagination and creates a story that is so compelling that all the other ones fall away. So, I think the story I’m telling myself is: how do I become more mindful? How do I not get to be 90 before I'm using my hands for my own creativity, and let go of my vulnerability and insecurities about the objects not being as beautiful as the ones I imagine in my head?
The Guild is also a very heavy decision, and can be quite scary. Stephen and I have built our business creating scenes and spaces for other people. Here, we did something that is completely our own voice. It’s both terrifying and energizing at the same time — the story I tell myself when I wake up in the middle of the night and think, ‘Oh my god, what did we do?’ is that whatever happens, success or failure, you are doing what you have always wanted. You are creating a community of artists, sustaining the craft movement in a new way. And if it does so on any level, that is a gift.
In what ways have you become the woman you've always wanted to be?
I'm very proud that I’ve been able to stay true to myself — that I’ve earned respect from men and women alike by speaking my mind. I’m quite independent — which has always been so important to me. Stephen and I have been together for 25 years; he is really an unbelievable partner in terms of supporting my strengths and voice. Ever since I was a child, I knew that I fought against asking for help, or getting support — it’s a bit of an ironic thing to say because so many women right now are feeling the opposite. In some ways I struggle with vulnerability and I think that this is something that really successful men don’t experience as acutely because they don’t have to continue to prove who they are. I think at 50, I still have to prove continuously who I am. I'm proud to have become a woman that has not been on the periphery, and that I’ve conquered a lot of fears of really coming to the table, and not being afraid to say, "No, I disagree," to a room full of men. Yet at the same time, I feel like I'm still on that hamster wheel. I'm always running to be heard. It's hard to be very peaceful and have a voice. I see some women do it, but I find it really hard to achieve that balance. That's a struggle. 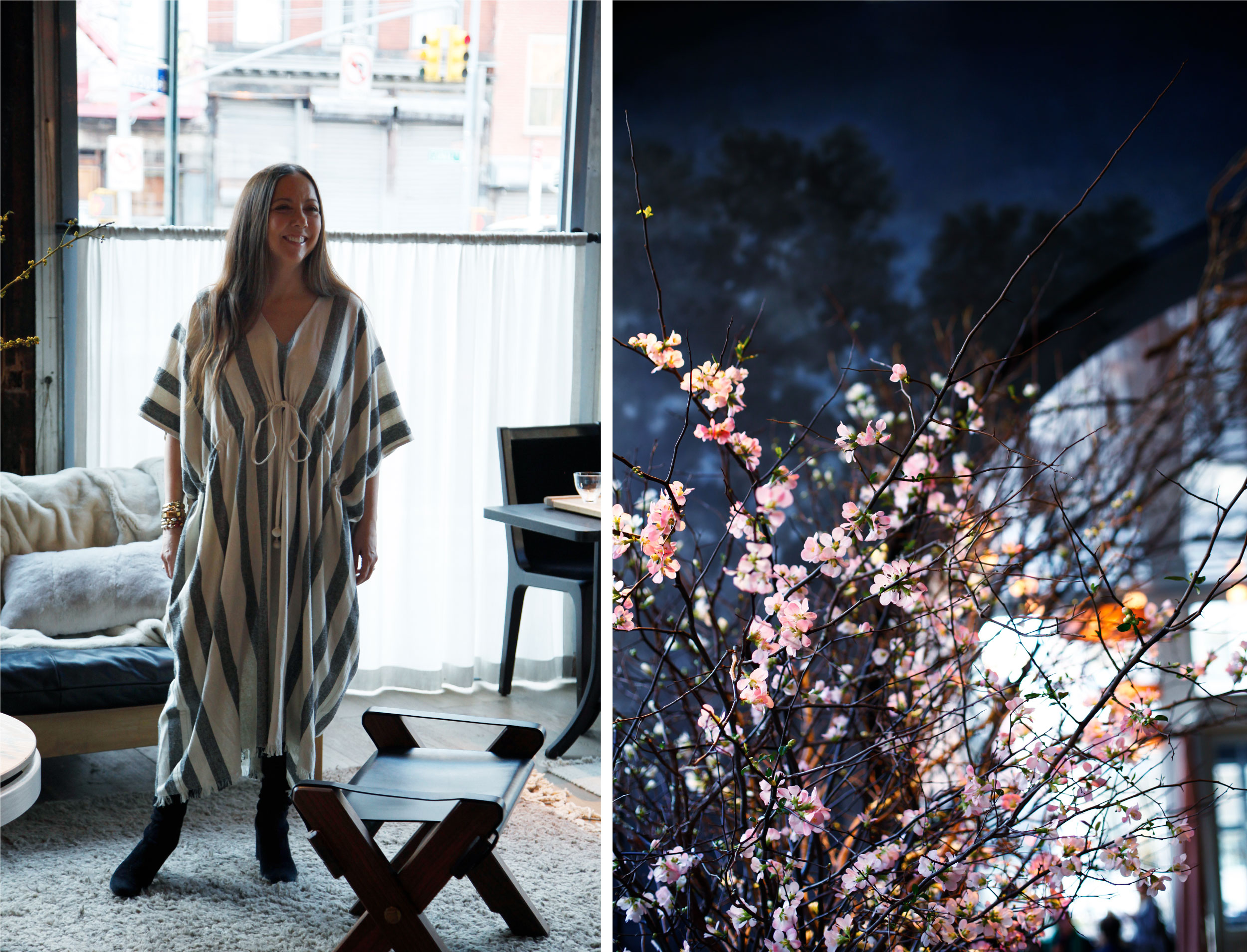 What are some of the most valuable lessons you’ve learned?
One lesson I've learned is the importance of finding the balance between strength and femininity — that femininity doesn’t have to have a defensive voice. I’m guilty of this, when it’s 2:00 on a Wednesday, and I am like, "Look, I want to be heard, and I'm not going to give up until I am." But I think it is valuable to find your center, to be able to communicate your ideas with neither frustration nor meekness. It’s a challenge…one I haven’t mastered after all these decades. And yet, perhaps that peace with the unresolved is a lesson in itself.