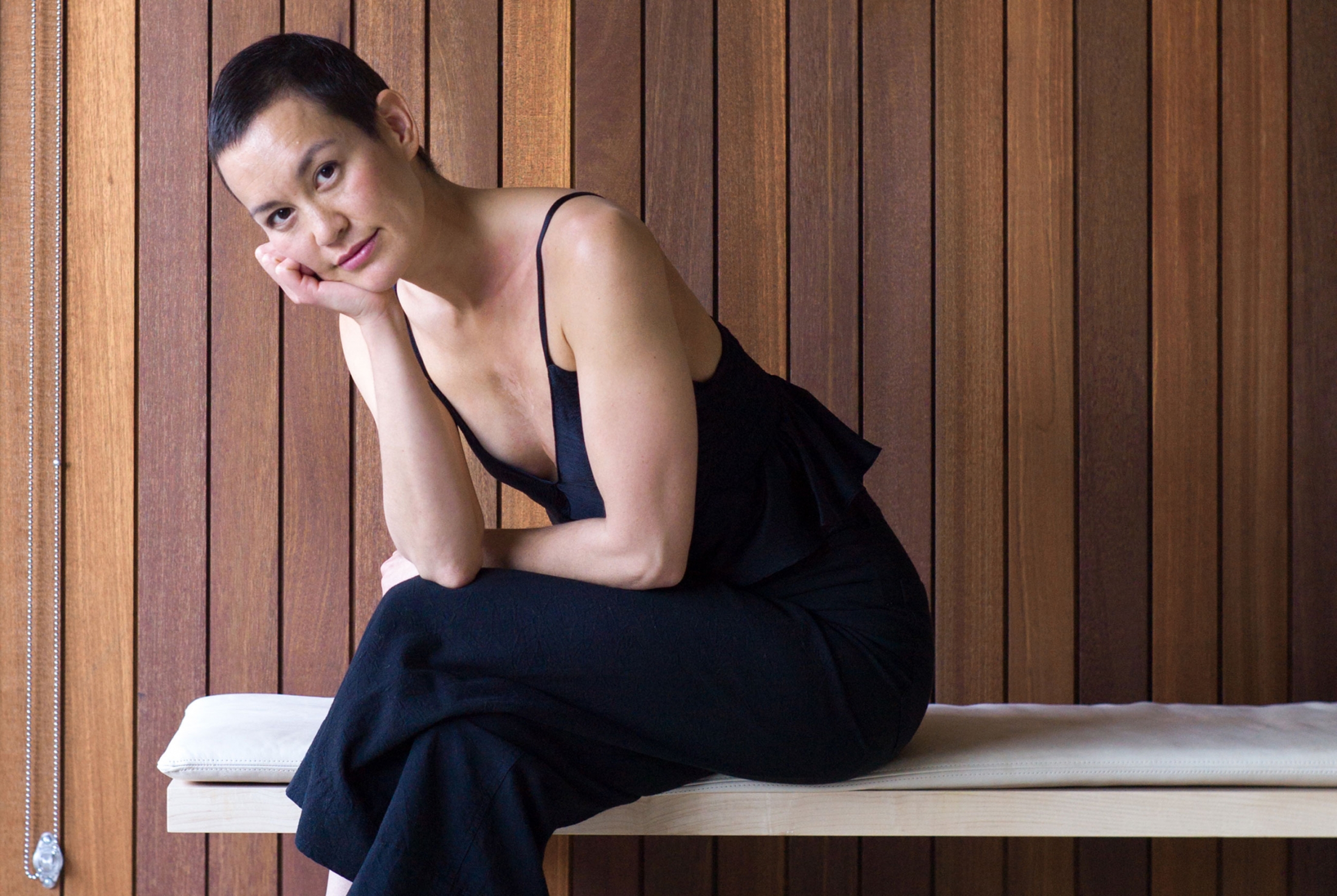 Rumi wrote, “The wound is the place where light enters.” Los Angeles artist Emilie Halpern has had a year of feeling — of numbness and fear, of shock and confusion, of love, lightness, and empowerment. Last January, Emilee lost her husband and less than two months later was diagnosed with breast cancer, undergoing chemotherapy while caring for her four-year-old son. In the fall she completed her treatment and in the following weeks spoke candidly with us about the path to overcome, and the unexpected, beautiful joys that have come from a journey of resilience and love.
Photos by Claire Cottrell, interview by Leigh Patterson, styling by Lauren Spencer King 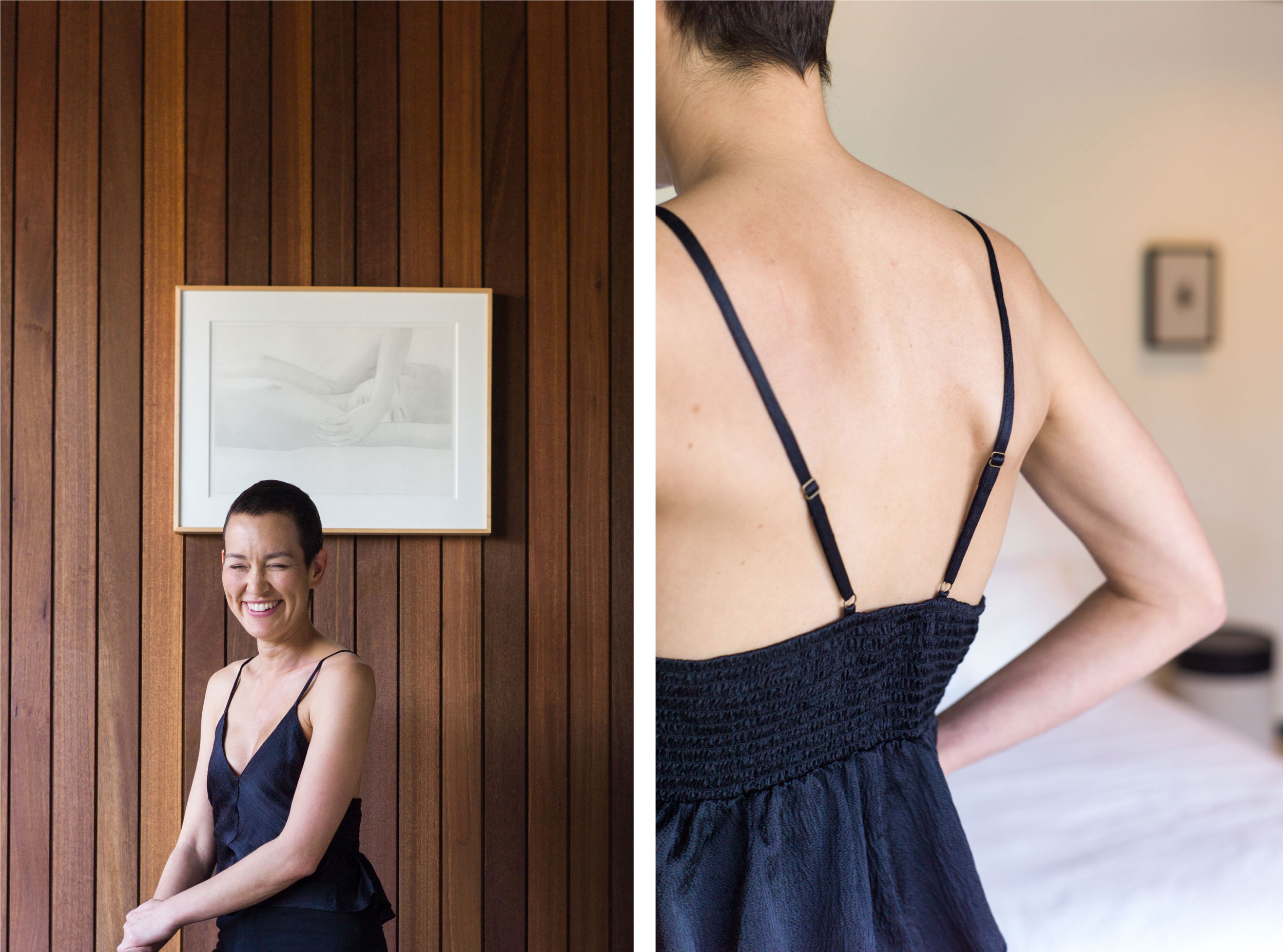 Can you share more about your upbringing and background? How does your identity and background play into how you see the world, and create work in response to it?
In my family, you’re either a doctor or an artist. I became an artist, but I’m greatly influenced by science. My father and his father were both researchers and professors of Medicine. They fueled my curiosity, my sense of wonder about the world. There is always more to see and experience, more to discover. That hunger is my muse.
I was born in Paris. My father is French and my mother Japanese, but she was raised in France. Her father was a painter who left Tokyo for Paris in the 1920s. There is something incredibly brave and romantic in that choice. The world was so much bigger back then. He made that great journey for art. His idealism and his commitment to art are something that have always inspired me, but even more so now. It’s not easy being an artist. The world doesn’t make it easy. But also artists are the first to doubt themselves. It’s unfortunately, an inextricable part of the creative process.
“We tell ourselves stories in order to live” — what is/are the current story/stories you are telling to yourself, about yourself about your present?
“Art will save your life.” I was forced to face mortality this year. When death is so close, you actually have to choose to live. It doesn’t become a given. My husband committed suicide, and then a month later, I was diagnosed with breast cancer. We have a son. He was four years old at the time. My husband chose death, I chose life. And art was there. When everything else was falling apart, was on fire, it was my Polaris. 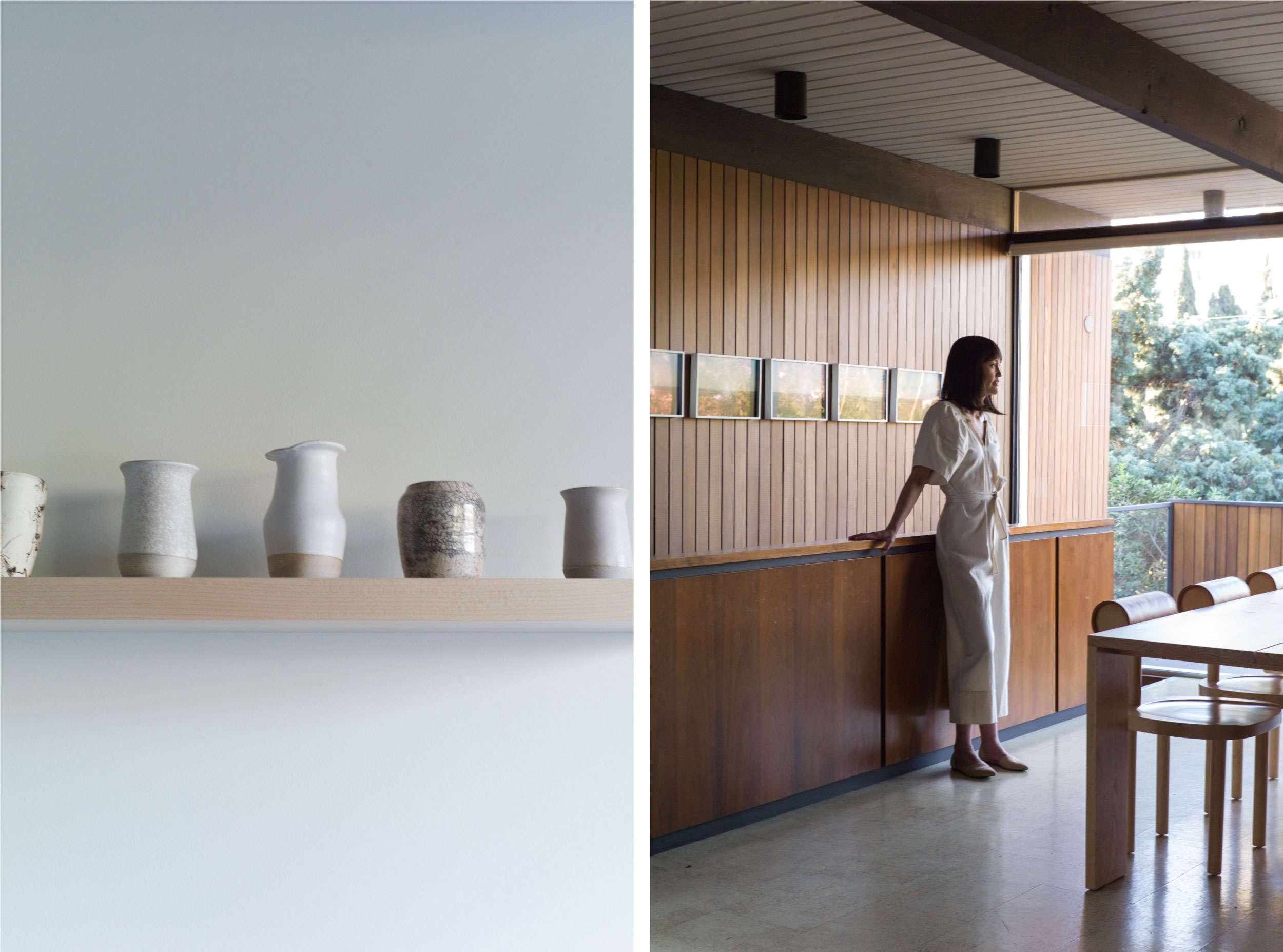 I think it’s only in retrospect that a lot of people are able to bracket “before” and “after” moments in their lives, but this is a bit different for you. Can you share more about how in your treatment and recovery (and just in the last couple years in general) have allowed you to see things anew, perhaps in unexpected ways?
Wherever there are ashes, new things can grow. Even in Hiroshima, after the atomic bomb, the first plant that grew was Oleander. I think about that often. In Los Angeles, Oleander is everywhere. From the freeway medians to the my neighbors front yard, you can spot those fuschia and white blooms all year long. They’re poisonous and resilient and beautiful and ubiquitous.

My Oleander was love. Maternal love, self-love, platonic love, universal love.
I look at the Oleander on my walk down the street, and with every exhale I think about the plant inhaling. The plant and I are breathing together. It feels like more than magic, it feels perfect, it feels like love.
How has the experience of having breast cancer affected how you regard your femininity and womanhood?
I lost my breasts, my nipples, my hair, and yet I have never felt more feminine, more like a woman. I had to find within me strength I never thought I had. Under great pressure, diamonds are formed.
I couldn’t control what was happening inside my body (the cancer) or even what was happening to it (surgery, chemotherapy, radiation). But I could control the way I looked. I could start from the outside. And you know what, when you look like hot shit, you feel like hot shit.
Cancer is invisible, but we associate the illness with the physical side effects of the chemotherapy. Movie Cancer is bald head, no eyebrows, sallow skin, and bags under the eyes. The stereotype of a breast cancer patient is a woman who has been stripped of her beauty and femininity. I never understood the power of clothing and makeup until now. I felt like a warrior suiting up for battle. I bought wigs. There’s a long one with bangs that makes me think of Jane Birkin. It’s hair longer than I’ve ever grown. There’s a bob with bangs that’s very chic, a bit vamp. It makes me think of Uma Thurman in Pulp Fiction. Jane & Uma were icons of femininity and beauty for me as I was coming of age. To simply throw on a wig and feel like I could embody them, is magical. And then there was lingerie. Black satin, lace, straps, stockings. Just thinking about it, let alone putting them on, was a turn on. I was ready to be a woman and part of that was owning my sexuality, to feel empowered by it. I didn’t want to just to be a warrior, I wanted to be born again like Venus emerging from the sea. 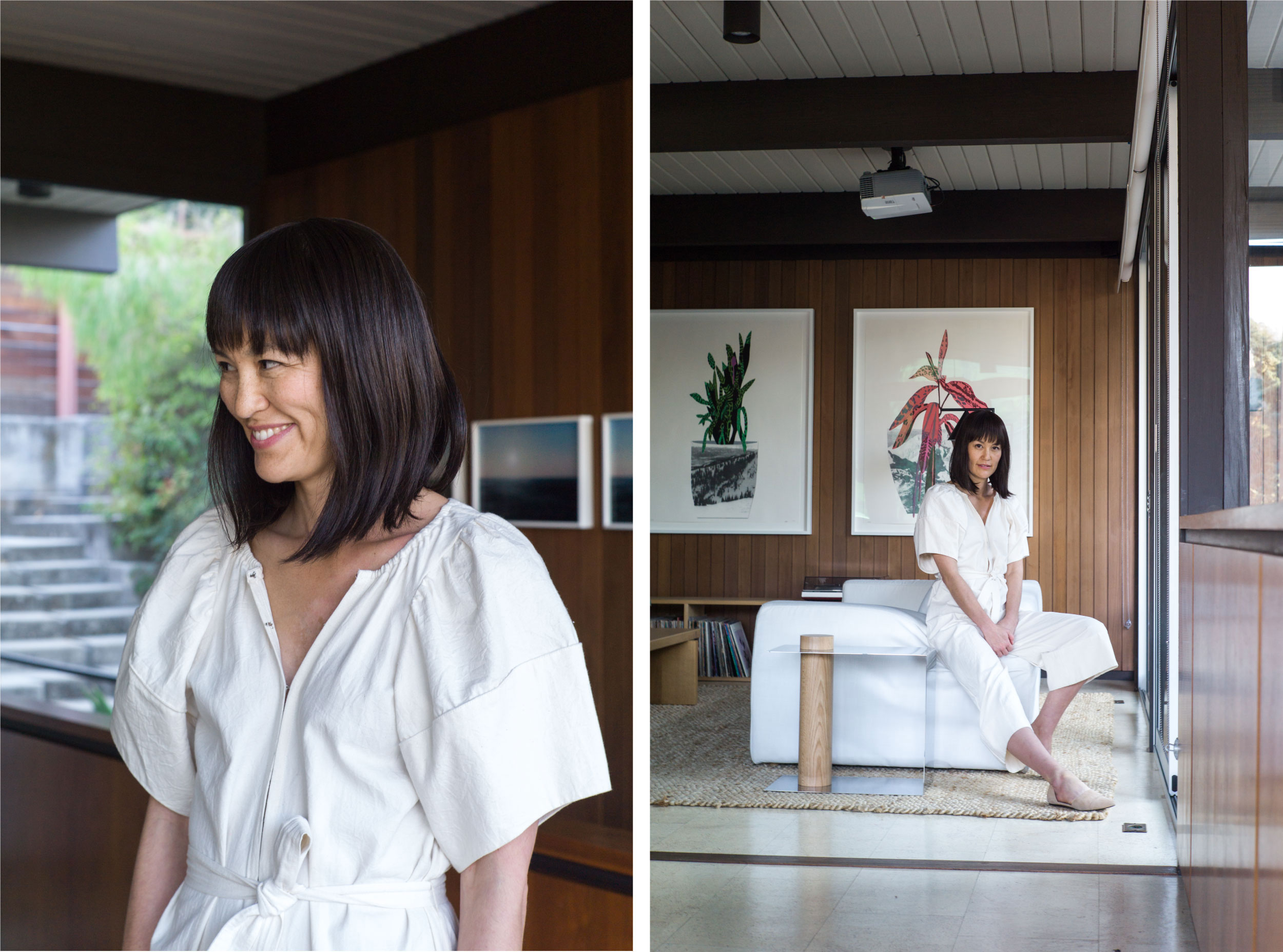 Rebecca Solnit writes: “To be lost is to be fully present, and to be fully present is to be capable of being in uncertainty and mystery.” Tell us a bit more about how you embrace uncertainty in life?
Fear has been my greatest obstacle. Fear of being alone, fear of loss, fear of death, even fear of sadness. Sometimes the sadness seemed like it would be bottomless, I was afraid to even look at it, to even talk about it.
I had lost my husband, and I was afraid to lose again. But what I came to terms with is that we all come into this world alone. I was here yesterday, and I was doing well. I already know how to be without a partner, and I know how to be alone again.
There’s a passage by Osho that helped me: “The fear that things may change tomorrow ... somebody may die, you may go bankrupt, your job may be taken away, there are a thousand and one things that might change. You are burdened with fears and fears, and none of them are valid — because yesterday also you were full of all these fears, unnecessarily. Things may have changed, but you are still alive. And people have an immense capacity to adjust themselves to any situation.” 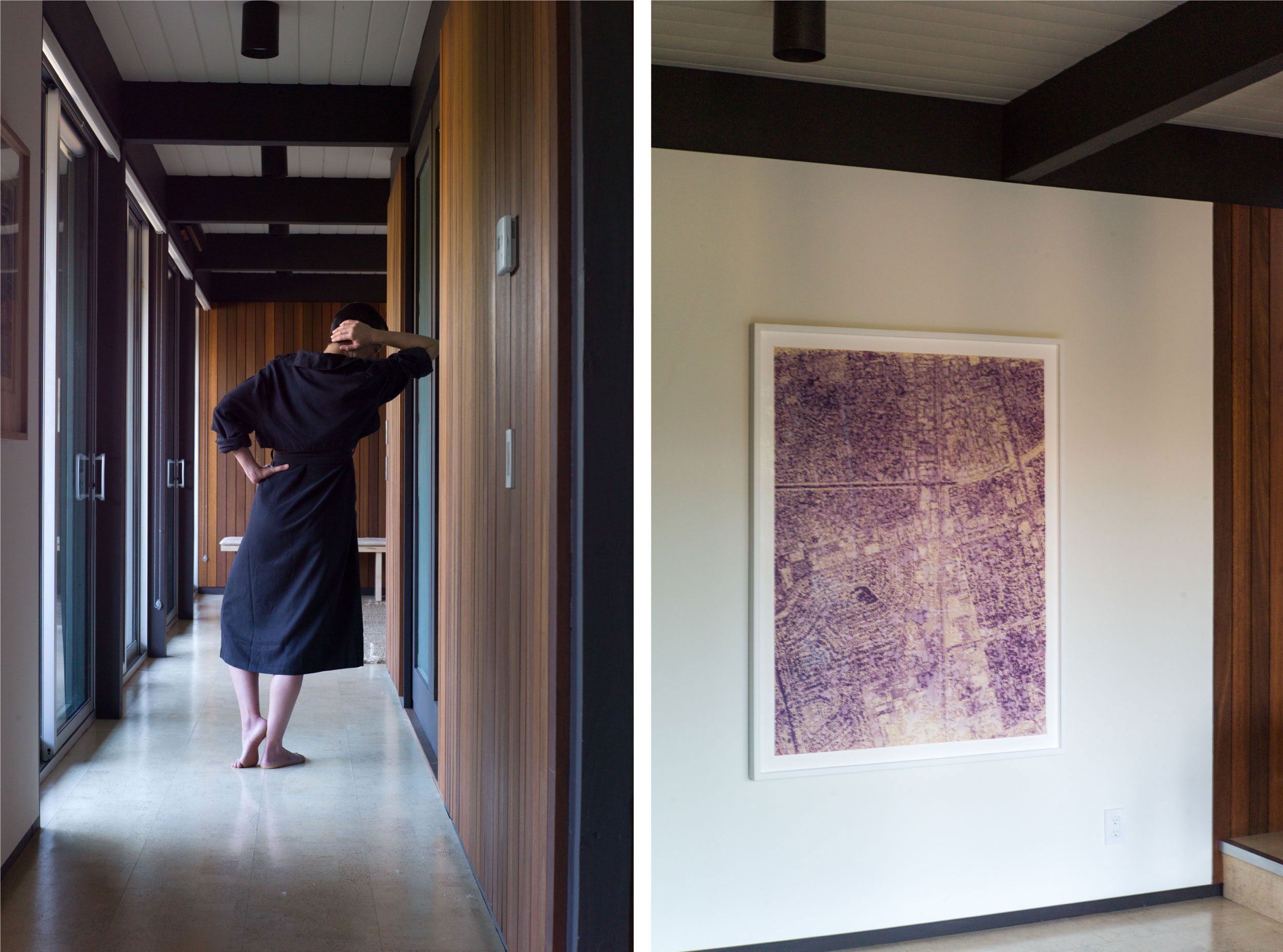 In what ways have you become the woman you've always wanted to be? How has your idea of that woman changed over time?
I’m interested in how seemingly opposite things in nature are actually dependent on each other and interconnected. Light precipitates shadow. Day cannot exist without night. Yin and yang. The line that separates day and night on the Earth is called the grey line. It’s a fuzzy line because the atmosphere bends the sunlight.

I want to be there.

Not on the extremes anymore, but in the balance. I’ve had to reconcile that as a woman in my erotic fantasies I want to be dominated, but in other parts of my life I would never accept those terms. Taoism describes masculine energy as decisive, always doing, logical, risk taking. Feminine energy is feeling, compassionate, nurturing, calm. Integrating both is resilience.
Do you have any rituals, disciplines, or self-care practices that help center you?
I try to immerse myself in nature as much as possible. I swim in the ocean, I hike. In Japan, there’s something called Shirin-yoku, it means forest bathing. There’s a patch of woods hiking distance from my house. I try to get up there as much as possible. It’s a tiny oasis of redwood trees in the middle of Los Angeles.