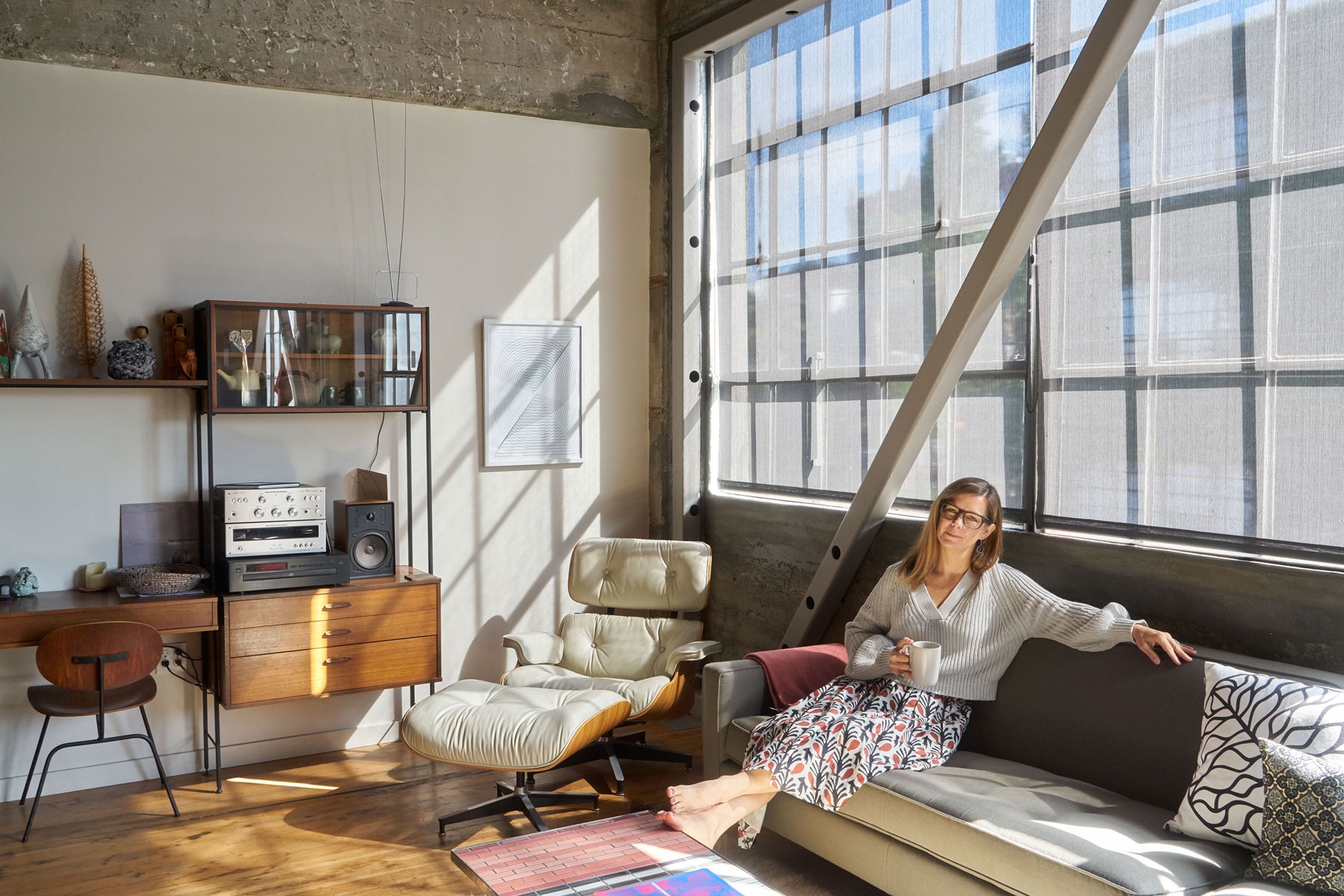 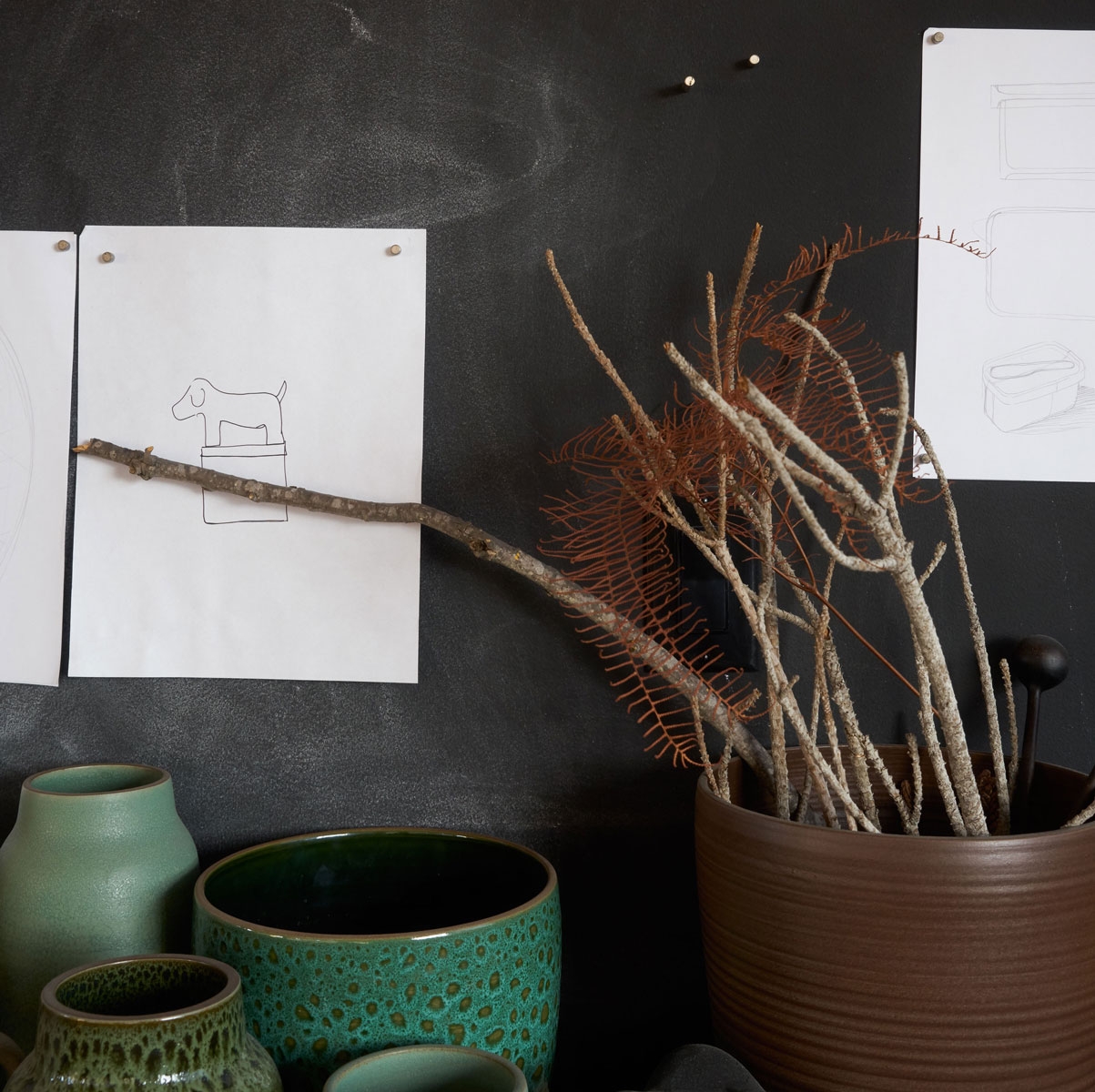 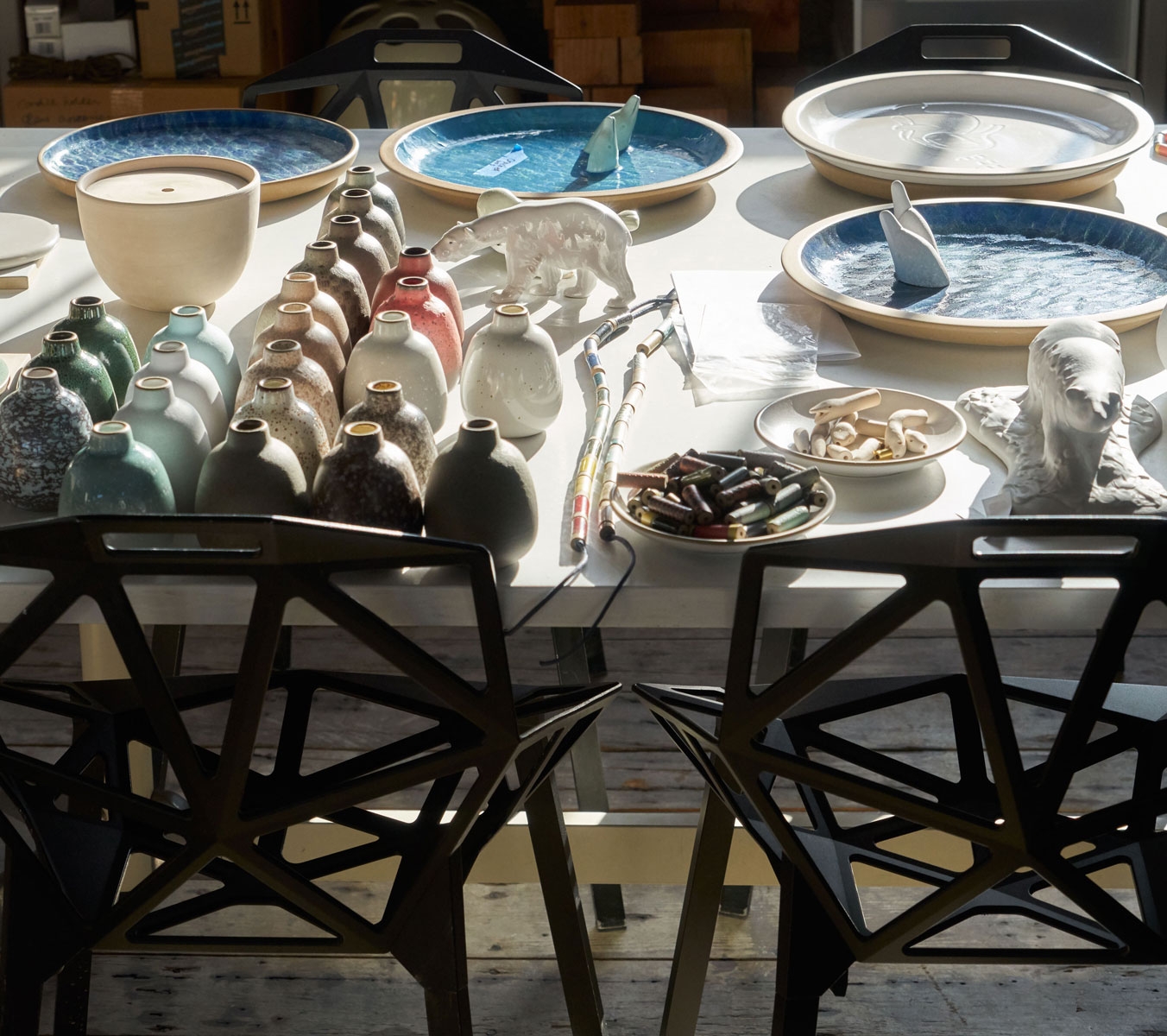 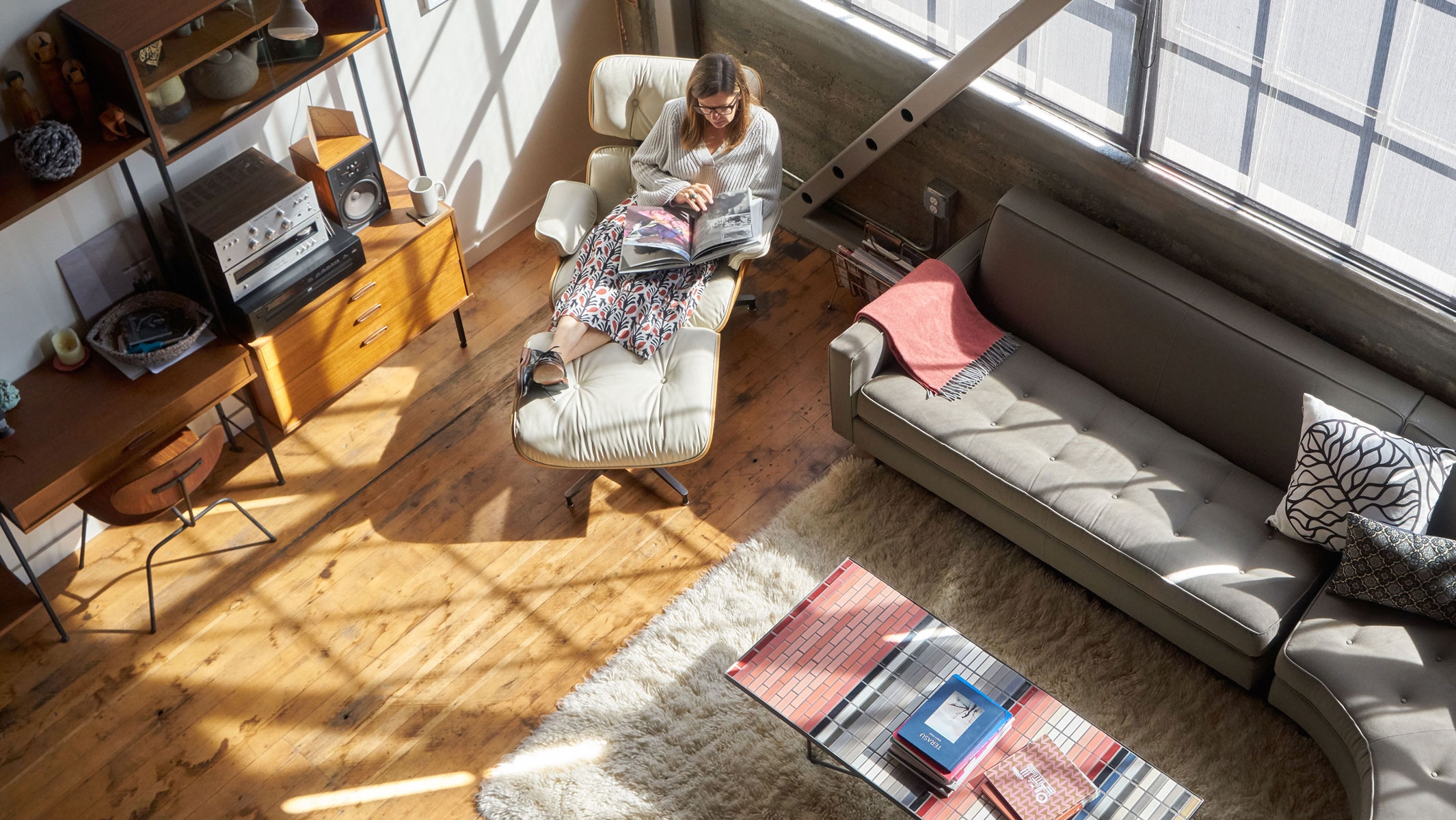 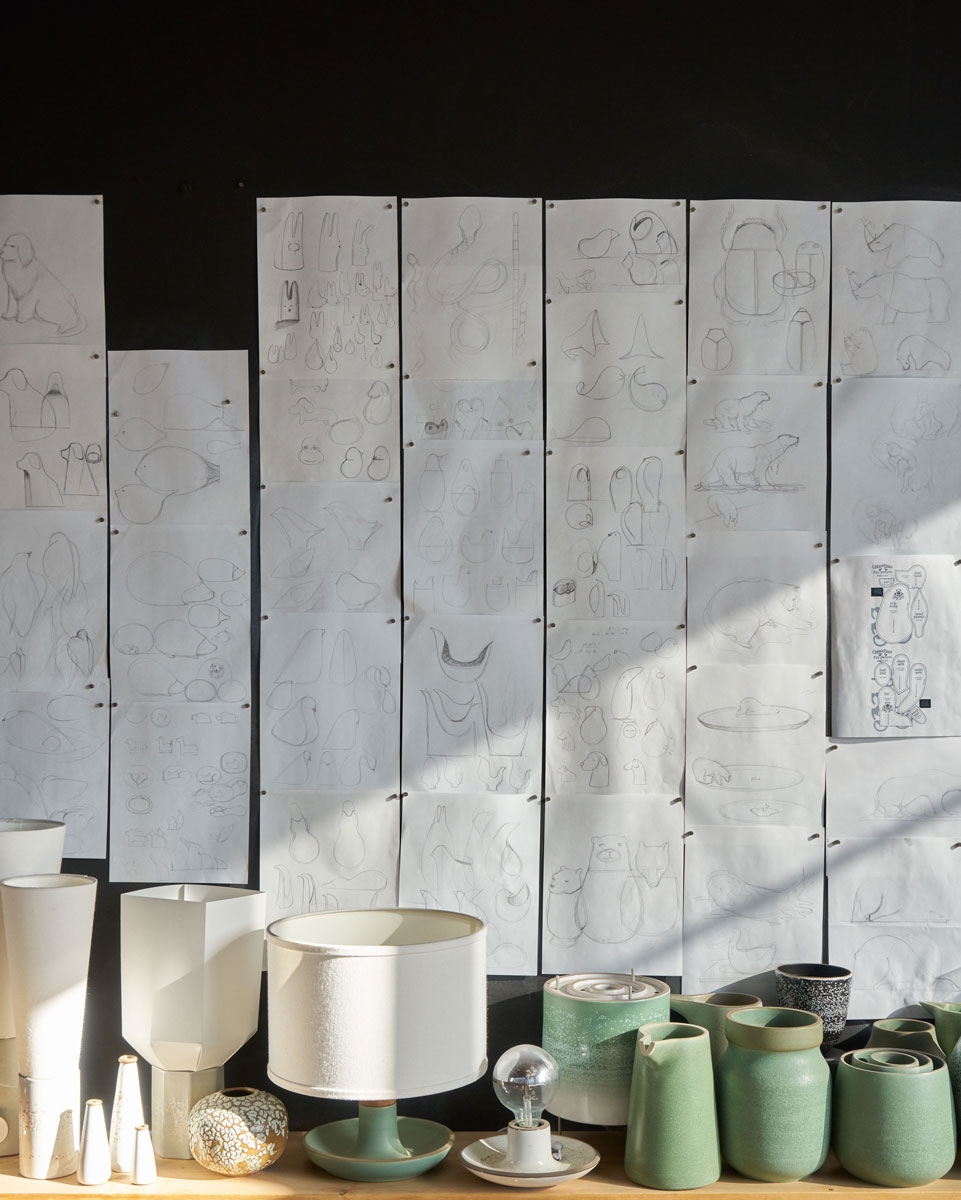 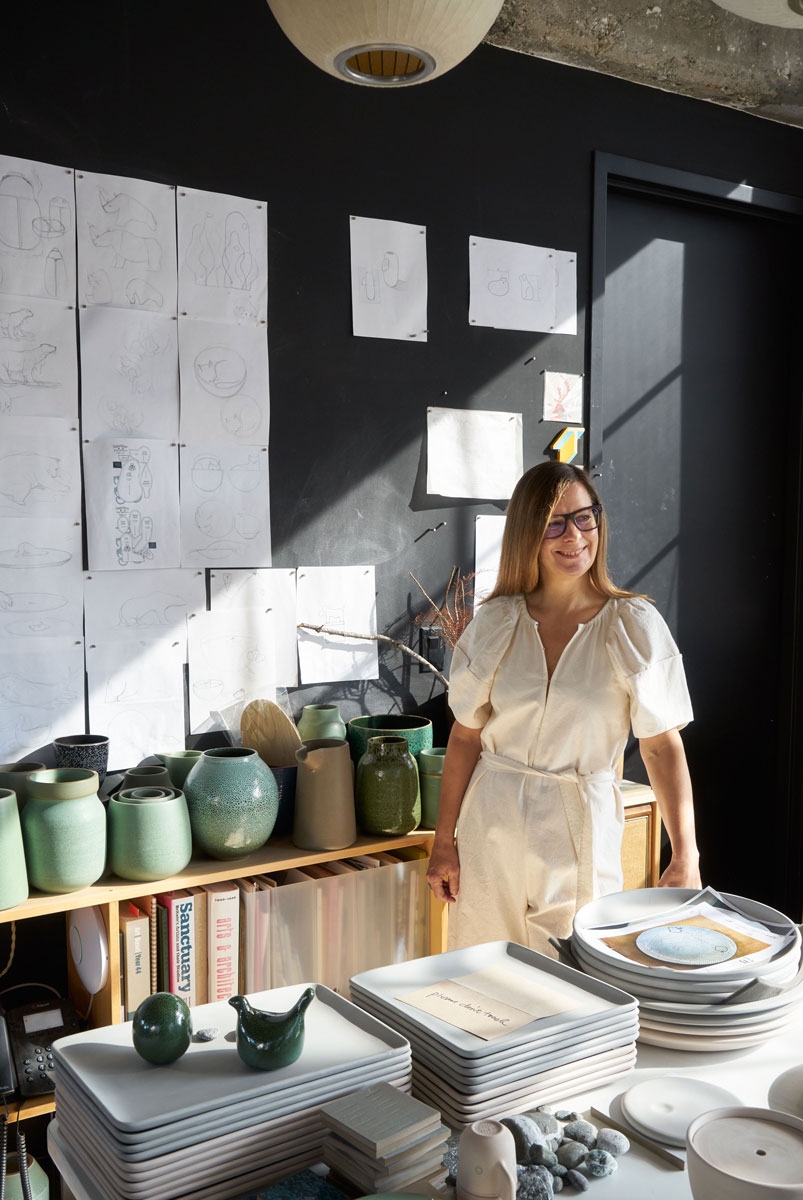 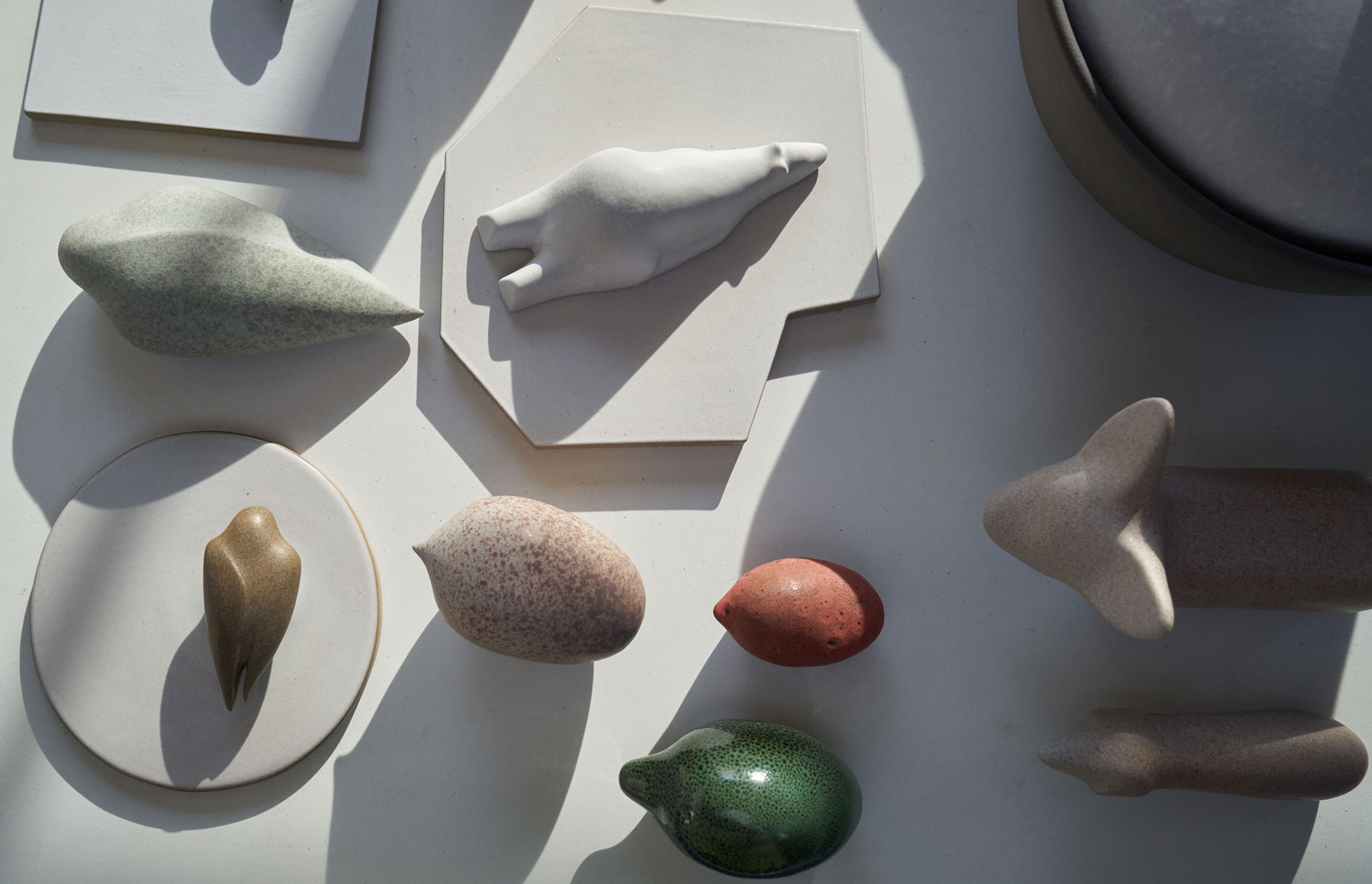 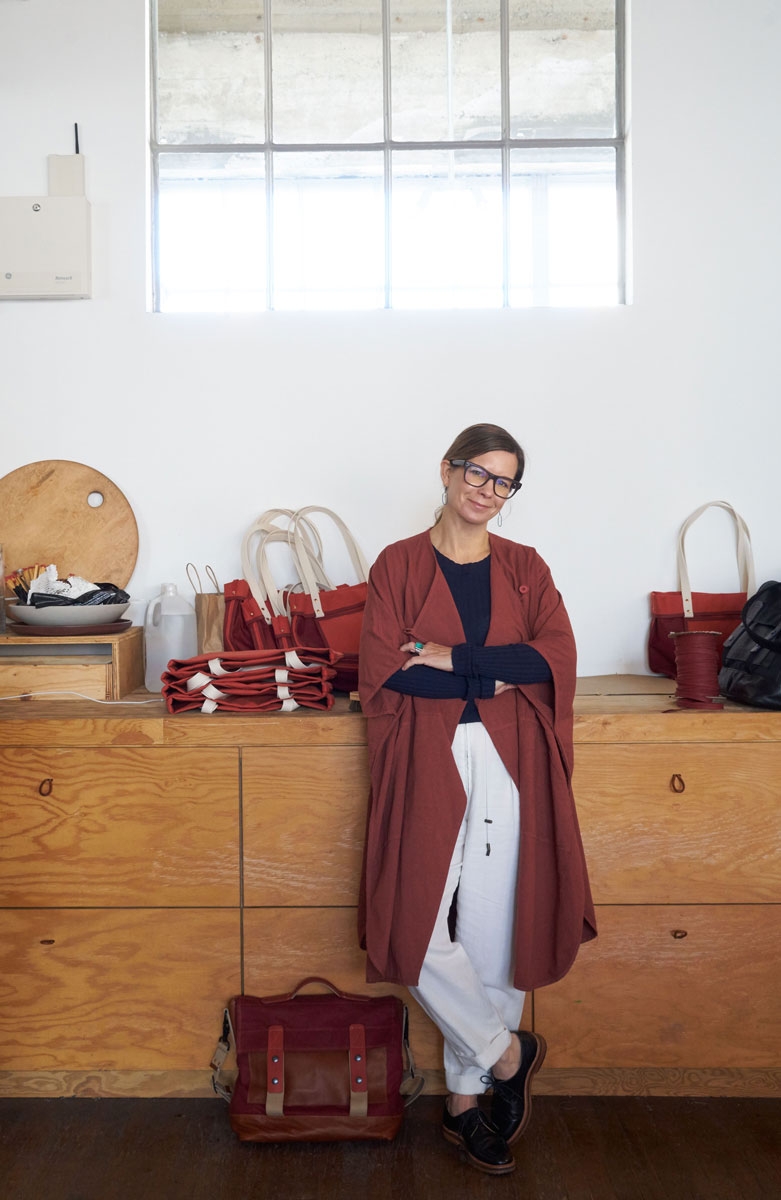 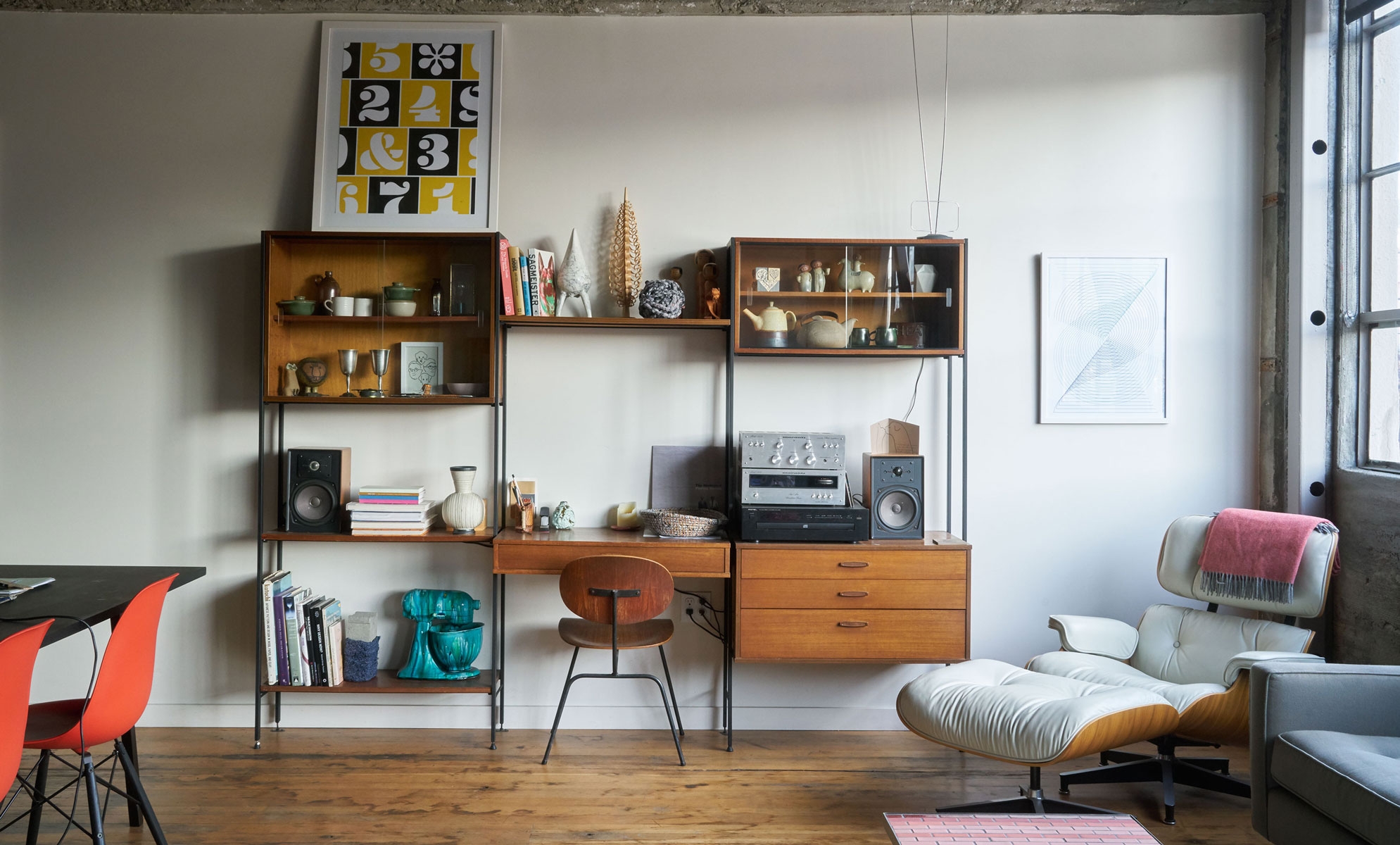 Catherine Bailey is one half of the husband-wife duo behind Heath Ceramics, based in Northern California. After stumbling into an old Sausalito factory, they bought the company in 2003 and decided to revive the brand, which was initially started in the 1940s by another couple, Edith and Brian Heath. Since then, Cathy and Robin have transformed Heath into a purveyor of handcrafted goods and a community of artists and skilled artisans. Cathy lives a life fueled by curiosity and travel — in August, she and her family embarked on a two month road trip to Alaska in a sprinter van; the perspective her journeying provides is apparent and inspiring. We visited Cathy at the Heath apartment, which sits on the second floor of the Heath Ceramics building in San Francisco, to learn more about how she travels, her past and current inspirations, and the value in having a vision.
As part of the Apiece Apart Woman series, a portion of sales from each story will be donated to an organization of the featured woman's choice. At Cathy's request, part of sales from this story will be donated to 826 Valencia, a Bay Area organization dedicated to helping under-resourced students improve their writing and reading skills.
Photography by Leslie Williamson, Styling by Lauren Ardis, Interview by Natalie So 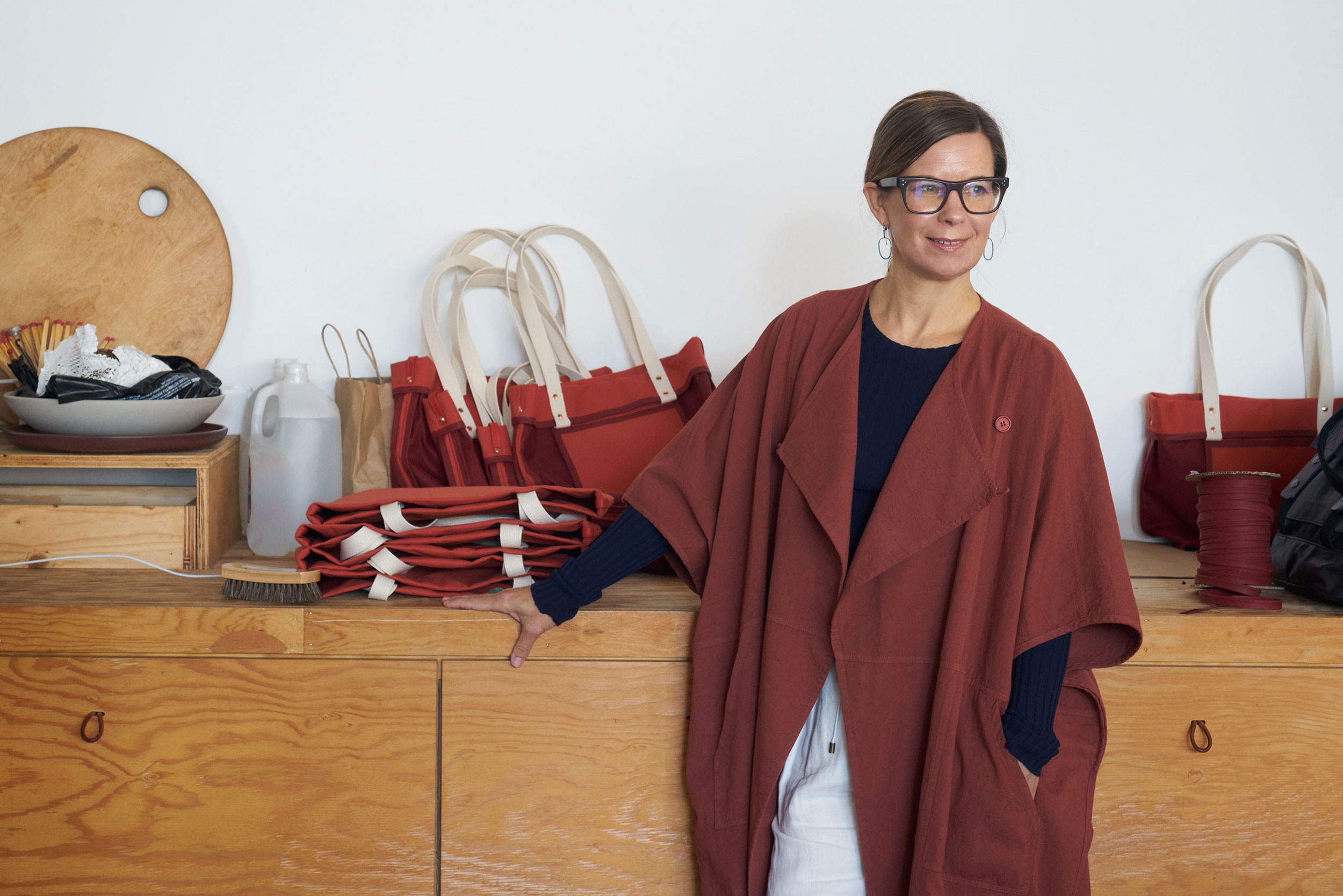 What was your childhood like?
I grew up in New Jersey, in the suburbs, where there wasn’t much design or creativity. It all looked the same, but still, I was very sensitive to the architecture that was around me: I could tell you every color and finish and texture in the house that I grew up in.
My dad worked in this Eero Saarinen building that made a big impression on me. You’re in the suburbs where the scale of everything is monotonous—no building is taller than another—but then there was this giant glass block in the middle of an incredible amount of land. It was like this fantastical thing of the future, where technology was being developed.
What have been the most important touchstones in your understanding of art and aesthetics?
For me, it goes back to travel. When I was in college, I studied in Italy for a summer and that changed everything. The aesthetic, the details, the materials, the design of the city, the houses, the culture. The thing I really remember is starting to understand holistic design—the way everything was connected.
How did you hear about Edith Heath, and what drew you to her story?
I knew about Heath Ceramics, but I did not know about Edith Heath when we first stumbled across the Heath Ceramics building [in Sausalito]. We [my husband Robin and I] learned about them soon after—Edith and her husband Brian, who was a big part of the story too. That was one thing that drew us to the overall story—that they were a couple. She was on the art side and he was on the practical side. It was like, “We’re kind of like that.” That was interesting.

I’m really inspired by the beginning phase of Edith’s career, when she originally designed the ceramics that became the classics, in that moment before Heath Ceramics became a real business. They were having to figure it out and struggle. It was the persistence and the vision to just put everything together. She had a really interesting and pure aesthetic in the beginning. The other thing about her that’s inspiring is the depth to which she explored the materials she was using and learned the science behind them. 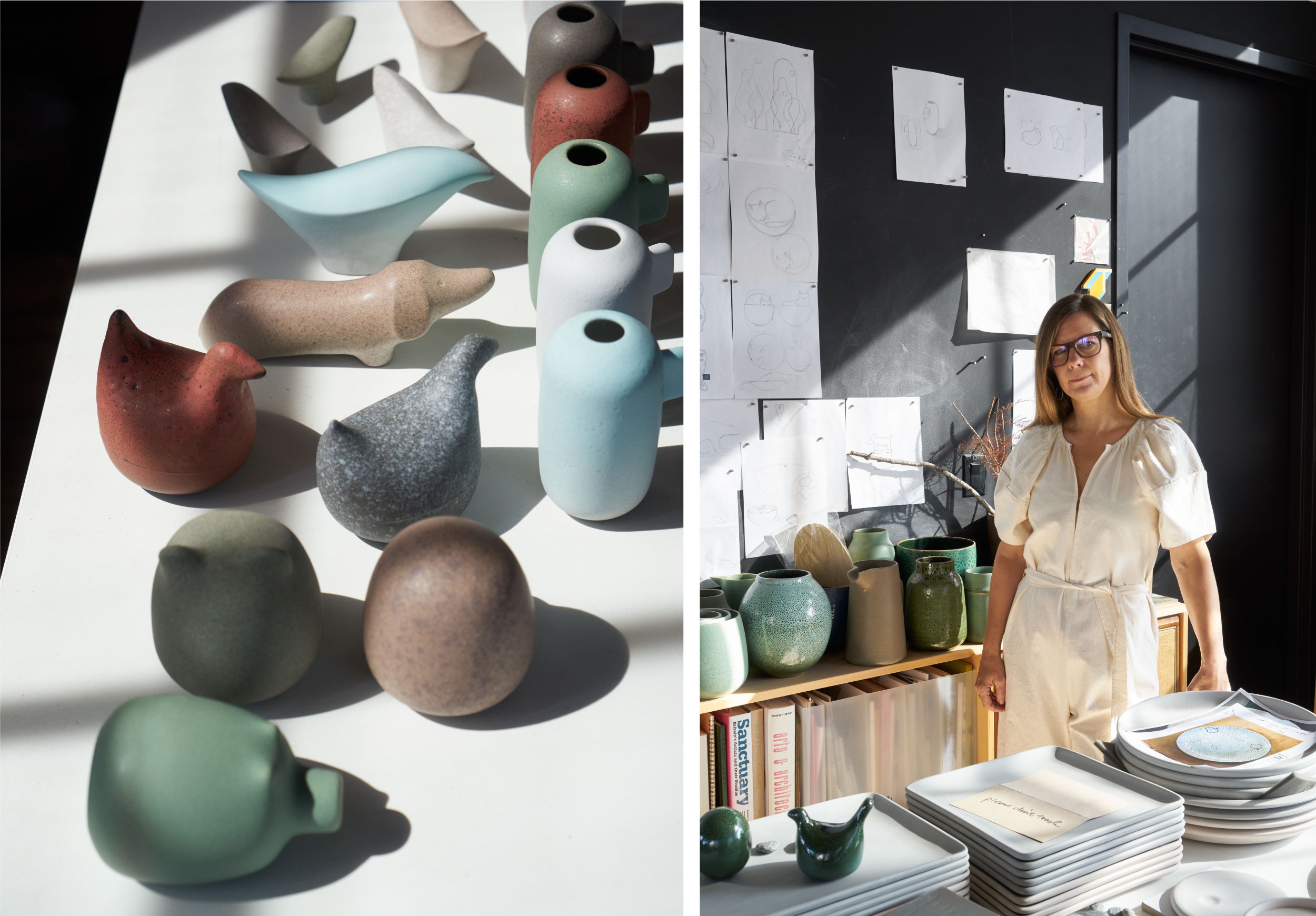 What ceramicists are you inspired by right now?
There is really great ceramic work going on now. There’s a gallery we love in Belgium called Pierre Marie Giraud where we got a piece by a woman named Bente Skjøttgaard. She makes these tree-like sculptures. I can’t even describe them. The glazes are beautiful. The form is interesting. It’s a lovely thing to look at every day. My other favorite is Takuro Kuwata, who is also at Pierre Marie Giraud. Both Skjøttgaard and Kuwata’s pieces are not like anything I’ve seen before. They’re pushing ceramics in new and interesting ways.
The Heath Building in San Francisco houses a community of artists.  How do you choose your collaborators?
Surrounding yourself with people and work that inspires you, or reminds you of a different scale of work is important to us. I love going next door and seeing what the jewelry-makers are doing or going down to the print shop. It’s wonderful to be able to talk and get a different perspective on things. It keeps you in check too. You walk down the halls, and you do not want to become a company that makes decisions that are out of touch with what we started out wanting to do. You just do better work if you’re surrounding yourself with other people who are doing really good work.
In terms of choosing collaborators, it had to feel right. Aesthetically, it had to be work that resonated with us, work we thought was excellent. They had to have goals for their art, craft, and production that was appropriate for the space that we had.
You frequently travel by train. Why?
My son has been obsessed with trains since he was two. I was like “Okay, Let’s just do it.” When he was two, we took the train back from New York, and that went well, so now we do it every year. It takes a long time, but I just do it. When I’m older, I’m never going to be like, “I shouldn’t have done that train trip with my son when he was six. I should have stayed at work.” So we travel. He picks a different route. It’s so incredibly luxurious to have that much time to just be with someone—especially your kid—and have nothing to do. We draw, he reads.
You also took a long trip this summer in a van. What was the highlight?
The trip was 49 nights in our van, and we went through Canada to Alaska and then back down. It was just the best thing ever. Haines, Alaska is at the top of our list. It’s all the way north in the Yukon. There’s only one road that goes there. There’s no one around, and the mountains are big and snow-covered. The river is amazing. There are bears all over the place. There was a great sense of community there, yet you’re just on the edge of complete wilderness. 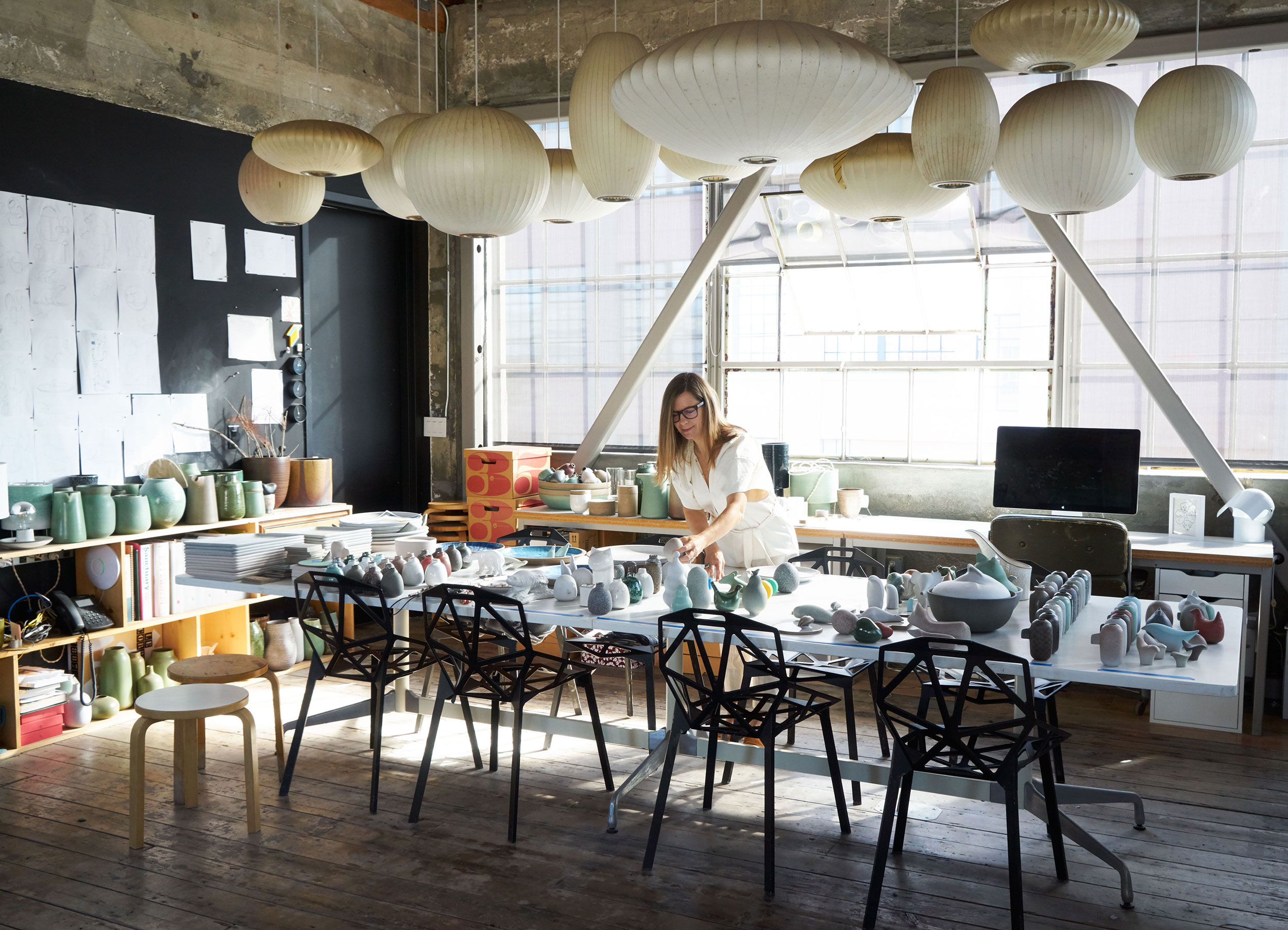 Who or what is inspiring to you right now?
Adam Silverman, who used to be a partner at Heath, is really interesting. He studied to be an architect but decided he wanted to work with his hands as a potter. He just had this vision of being seen as an artist. I watched Adam define himself, and he’s just the most interesting potter, pottery-maker, whatever you want to call it. He’s got a very clear sense of where he’s going to go.
Leslie Williamson is fun to watch too because she has this real vision of the kind of work she wants to do. And the way to do that was by doing books.
The most inspiring meal I’ve had recently was when we were in Stockholm, at a restaurant called Rutabaga. I think the interior is by Ilse Crawford (who is also on my list of inspiring people). The whole experience of the food was inspiring, and the plates were beautiful.
The last book I read was "Travels in Alaska" by John Muir. That is a good one. I read it on the trip to Alaska. What’s amazing is that John Muir traveled to Alaska in the early 1900s, to all the same places we went to, but in a canoe. It’s crazy to hear his take on everything at that point in time. You could really imagine it. It gives you a real sense of what life was like then.
What is one piece of wisdom you wish you had known 10 years ago?
What I wish I had known 10 years ago—but I need it more now—is to make sure I take the time to create a vision for where I want to go. To sit down and write out that vision. Nowadays I can’t really get by without that. This is important because there are a lot of people around me, and if they don’t understand the vision then it just doesn’t happen, or it’s incredibly painful. I’m not a single artist in my studio. The other thing is just really being conscious of what you want your day to be like, and then trying to get there. I like to sit and draw. I need to figure out a way to get that.
What does your ideal day look like?
Traveling. I’m at a point in my life where I want balance. It’s intense when I’m here [at Heath] and I like the work and I want to be involved creatively. In the future, it’s more time working closely with the designs and producing products that I love. I want to balance that with spending time with my family and my dog, and drawing. You can’t have it all, but I think you can create a structure around your work that allows you to do the things you want to do. The thing is—you never look back and go, “Damn, I wish I worked more.” You just don’t.