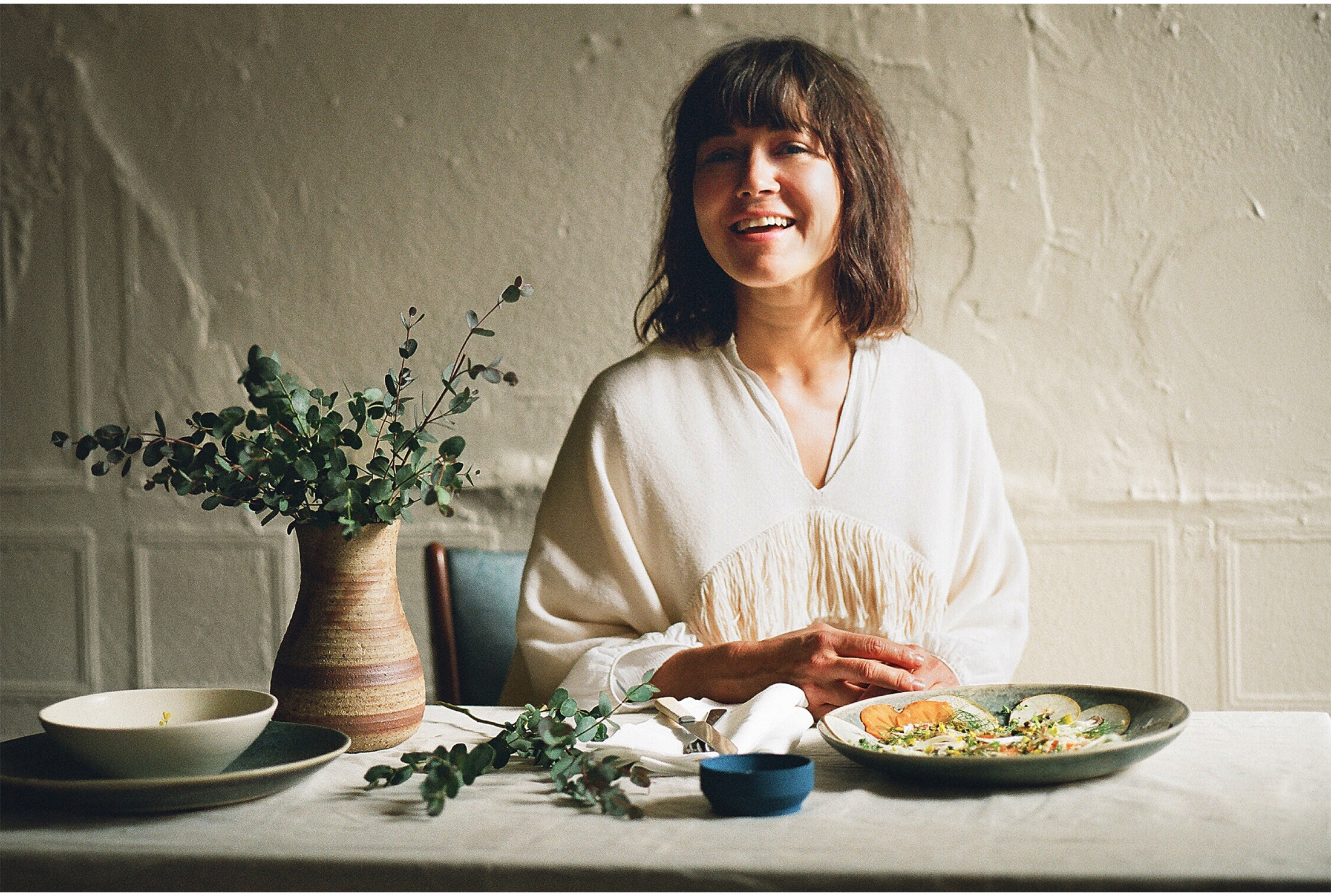 Camille Becerra is much more than a chef. We’d also call her an artist, a storyteller, and an editor, whose approach to cooking takes an avalanche of inspiration and refines it into simple, paired-back meals that are visually beautiful, unexpected, and delicious. Last week, Camille announced her departure from Navy, the beloved New York cafe where she was executive chef, to focus on a new chapter of her work and explore the different ways that food can be experienced and shared. We visited Camille at home and on a trip to the farmer’s market to hear more about her inspired, interdisciplinary approach to cooking, and discover where she’s headed next. 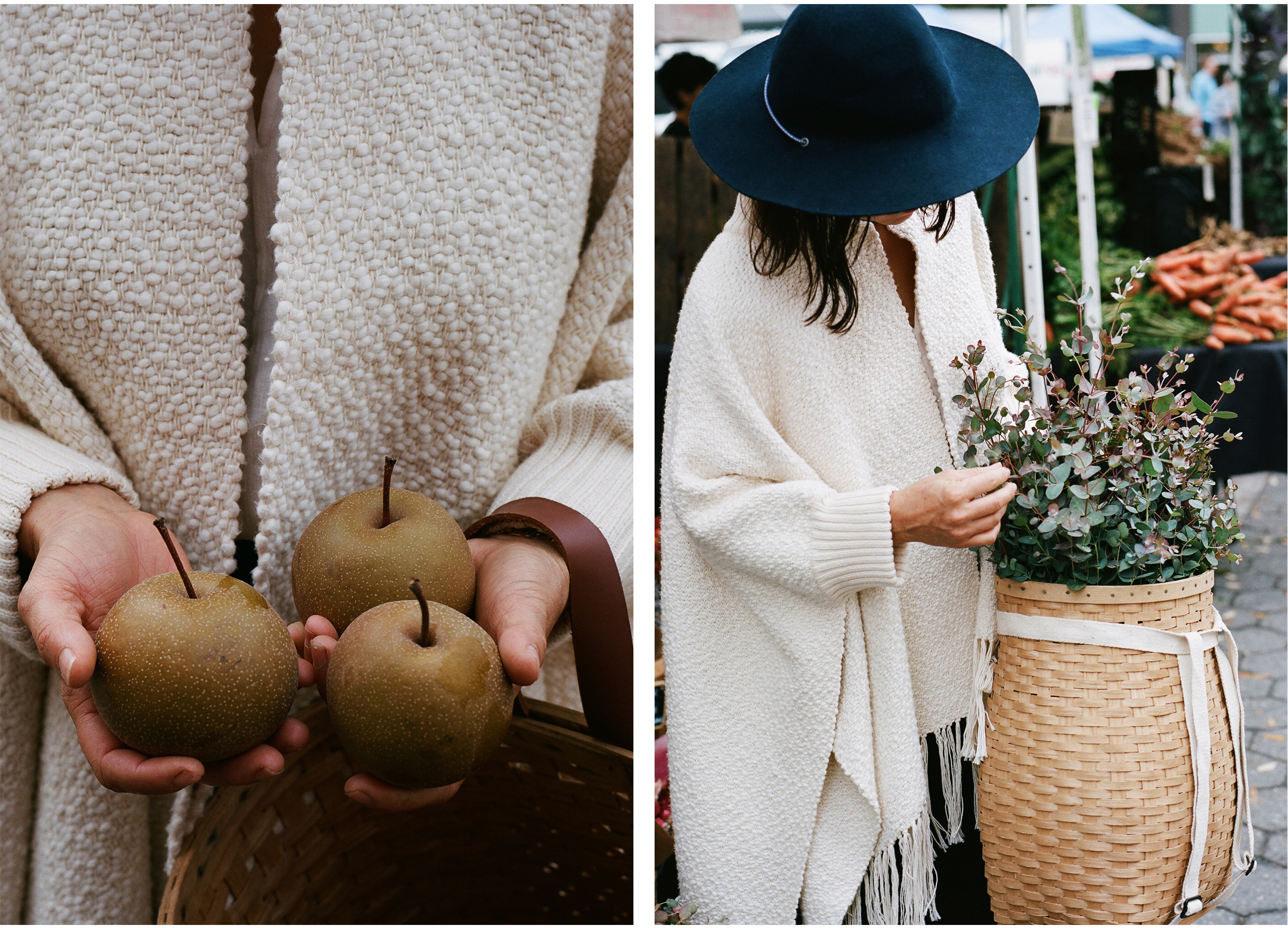 Camille wears HEAVY PONCHO and SHIRRED AGATA in cream
Can you share more about your upbringing and what has led you personally and professionally to where are now?
I don’t know that my childhood dictated what I would do — I grew up in a single-parent household in a fairly urban setting, so it wasn’t about elaborate meals or having a garden or anything like that. I came to cooking a little later: after graduating high school, I took a gap year and I traveled across the US. Through visiting different places, I spent time in areas where there was more of a focus on beautiful ingredients, eating well, and farming. From there I gravitated toward technique, and was drawn to both the process and experience of cooking, especially the social connection of food — how it brought people together around the table. That led me to go to culinary school, where my career truly started.
What can you share about what you will be focusing on post-Navy?
I’m working on my first cookbook, which I’m really excited about. It’s kind of a different concept in cookbooks, so I’m very busy with that and it’s allowing me to work with a lot of wonderful people and people I look up to. Simultaneously I’m looking for spaces and for a partner that can bounce what I do in the back of the house with front of the house.
I also am interested in focusing on specific meals — I don’t necessarily call them pop-ups, but I love the creative power you have in a dinner that is more of a one-off or a series…it becomes artistic, almost like a performance piece where people come with an expectation of surprise. 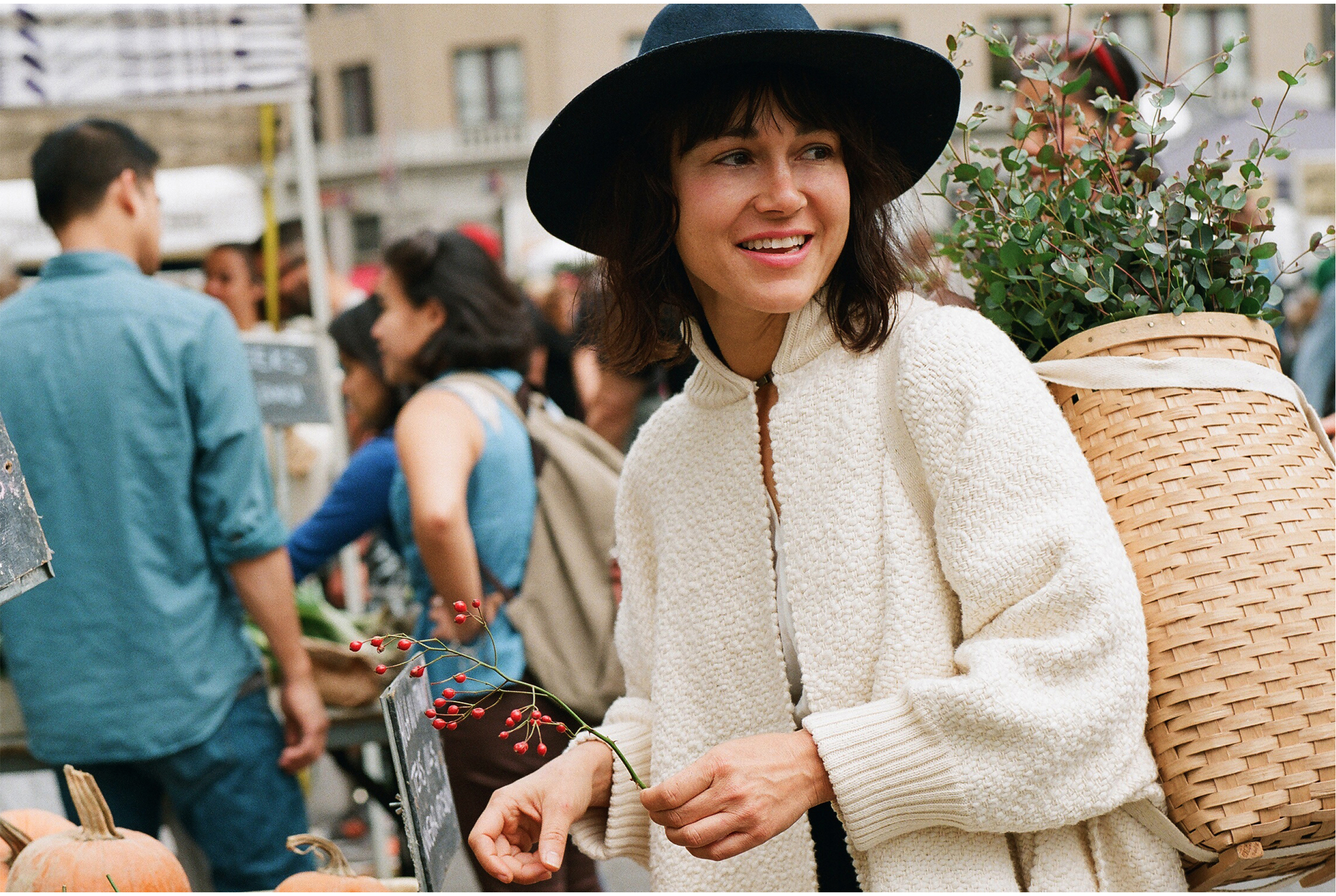 Those special dinners also give you some freedom to think about food in a different way — you want it to taste good, but it also becomes about the colors, textures, and concept behind a meal. What are some recent culinary inspirations that explore this juxtaposition?
In terms of eating, I love the pairing of salads where something is cooked and something is raw. That’s such a great way of thinking about a dish. In terms of taste, it’s really all about the search for a balanced flavor and getting your palate to understand what that means. While each ingredient is very different, they all have qualities that work together. When I teach a class, I always really focus on that: if it’s not balanced, what does it need? In terms of palette, there’s so much! I go between Old World, sort of moody colors, to more Mid-century pastels, which I’m really loving right now.
Do mediums outside of food ever directly inspire your cooking?
There’s a theatrical element that I always want to bring to special dinners, so I’m always referring back to that film “The Cook, the Thief, His Wife & Her Lover.” I love to have the setting look almost like a stage on a set of a theatre play.
What have been some quantifiable moments in your career that have impacted your work or trajectory (quantifiable defined as something actionable — like taking a specific trip, taking a class, learning a specific skill…)
There’s so many. One, when I was a really young cook and I was referred to this zen center in New Mexico, where they prepared very classic Japanese food. I remember in that experience really understanding that food should be simple…the simpler, the better. When it is, the quality has this beautiful platform to shine. Another moment for me was working in fine dining with a specific chef, and observing the way he approached color in his work…it was just so beautiful. That very much inspired me, and I refer to it still when I’m on set as a food stylist, or when I’m developing a story for a magazine, or when I’m a chef in a restaurant. Even though I don’t do fine dining, it still defines so much of how I see a plate. There’s the element of flavor, and making it taste good, but it’s also about refinement: You don’t want too much of one color, or one flavor. 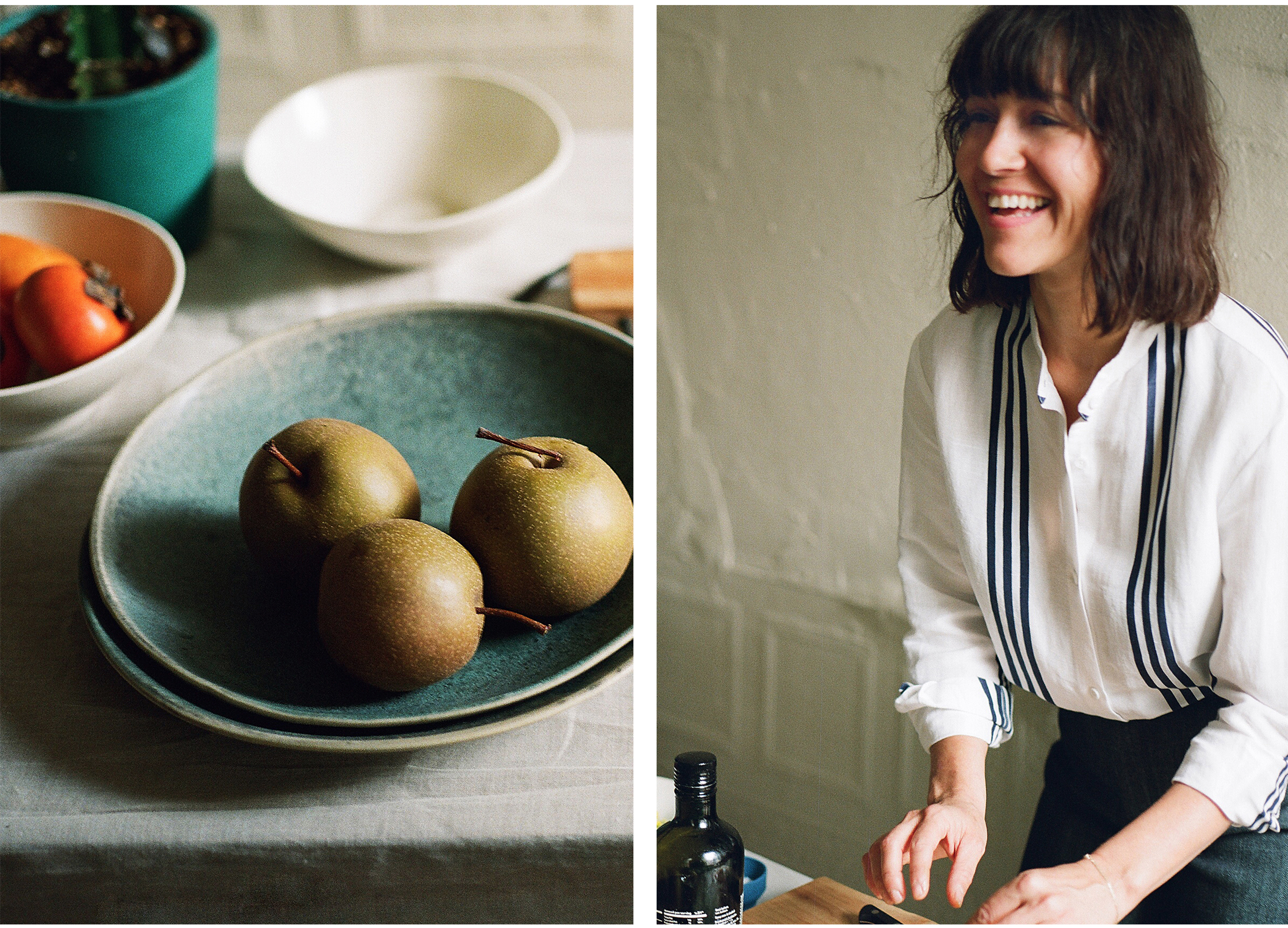 Camille wears AUGUSTINA BUTTON UP in white stripe and HIGH-WAIST FLARE in japanese raw
Do you ever go through periods of creative stagnancy?
In writing this book, there are hard moments, because I feel pushed to give people something they don’t already have, but I actually feel like I’m almost always very much inspired. I just have to go to the farmer’s market and my local spice market and see what catches my eye, or I’ll go to a special shop and have the owner point out something that I’ve never worked with. Then, bringing it home and seeing what I can figure out becomes the foundation of what I do; that’s the core of my inspiration.
What are some of the most valuable lessons you’ve learned?
Work hard. Find something that you absolutely love and pursue it. When I see people who aren’t happy, generally it’s that they aren’t happy with what they do, so finding something you’re passionate about—whether it’s a job or a creative outlet—is very important to me.
What do you eat for dinner alone?
I usually eat really comforting foods, like pasta or rice and beans or rice with some sort of kimchi and an egg. Simple, mostly vegetarian meals. 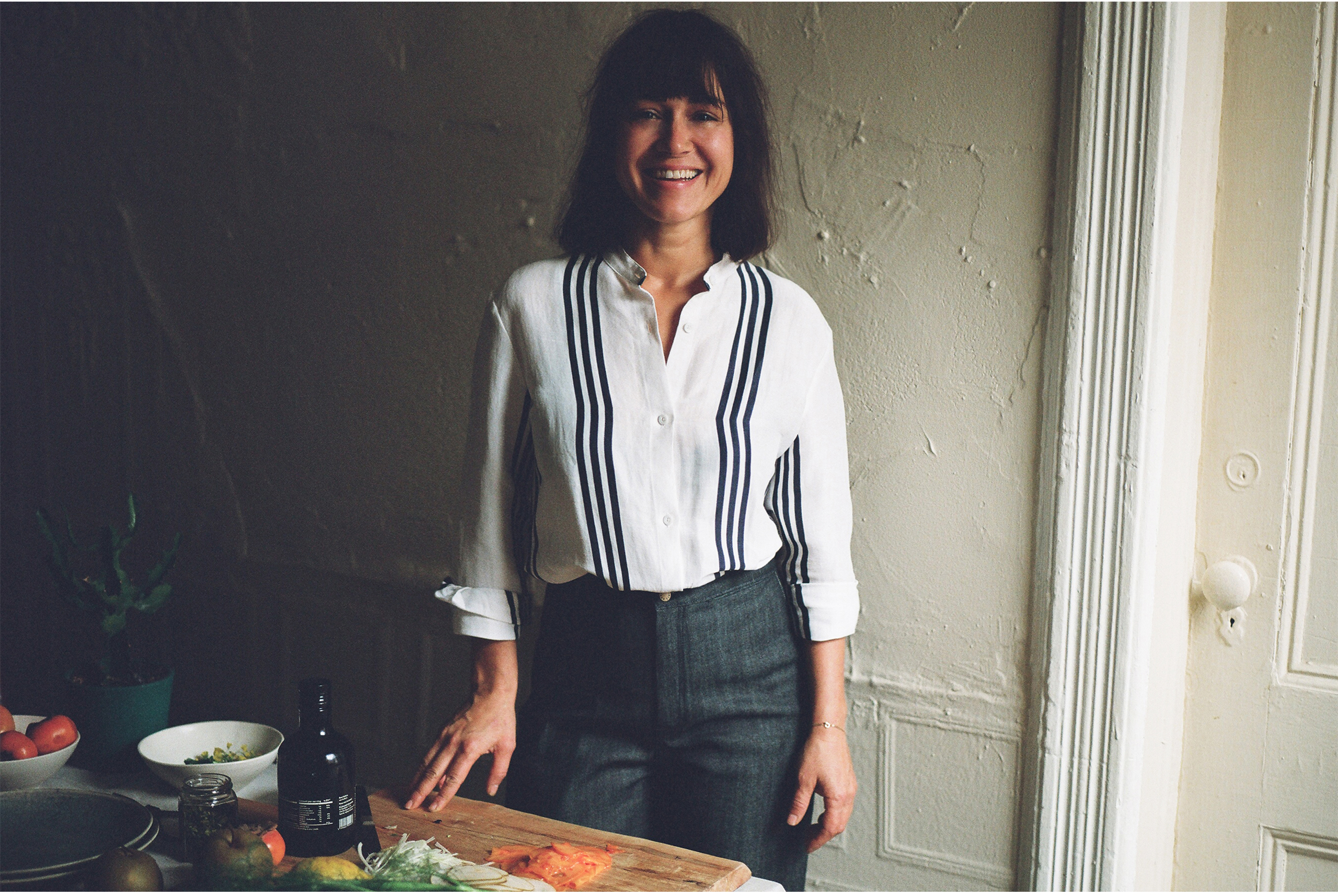 What are some favorite recent non-food related discoveries?
I went to Mexico City and toured the Luis Barragan house and it was so amazing and inspiring. His use of color, how carefully planned the house was to fit in with how the sun rises and sets…It was just unbelievable; with every turn I was gasping. I’m also inspired by fashion, which is funny because as a chef you don’t need a lot of extra clothes, and I don’t really buy a lot because there aren’t many opportunities to wear nice pieces. But being in the kitchen has shaped how I look at a a wardrobe — when I’m not working I still adhere to the same idea of a minimal, uniform that pays attention to details, comfort, and specific shapes that I can stick to.
With all this talk of your salads and how you approach preparing them…could you share a recipe for a favorite fall salad?
In salads, I like to approach pairings by looking at the fruits and vegetables in front of me and think about how they will work together — not only in flavor, but in palette. For this very simple one, I mandolined celery, fennel, persimmon, and Asian pear onto a plate, and drizzled it with Citronette, a French citrus dressing, which is very easy to make: it’s straight lemon juice, and you add some honey, which you keep adding until it tastes like a sweet lemonade. At that point, add some salt and whisk in a neutral, soft oil like grapeseed or canola, until it has some body and a good weighty consistency. Sometimes I even sprinkle a tiny bit of chile at the end — not so that it makes the dressing spicy, but so that it has a nice backend depth and sits on your palette a little longer. 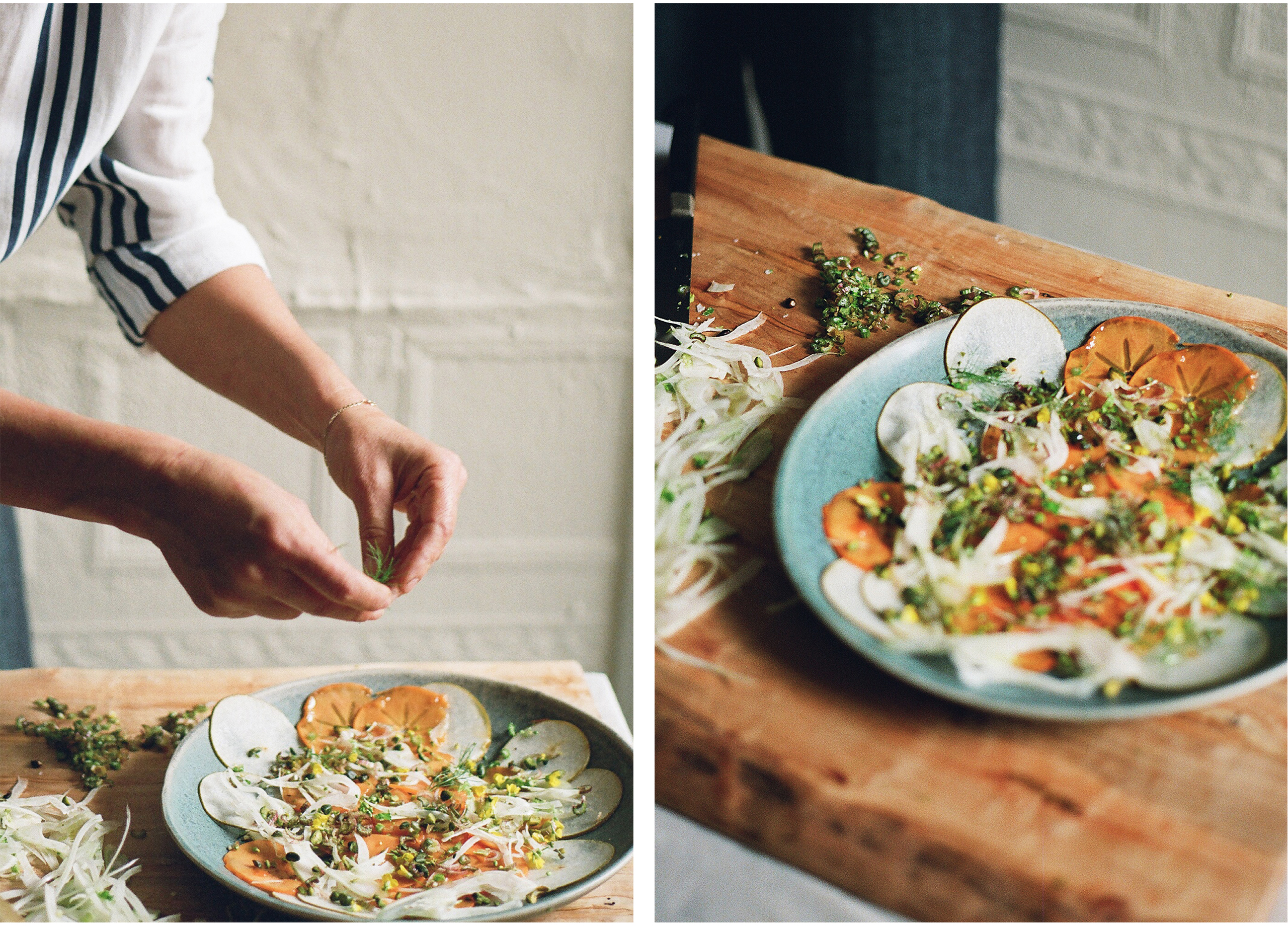