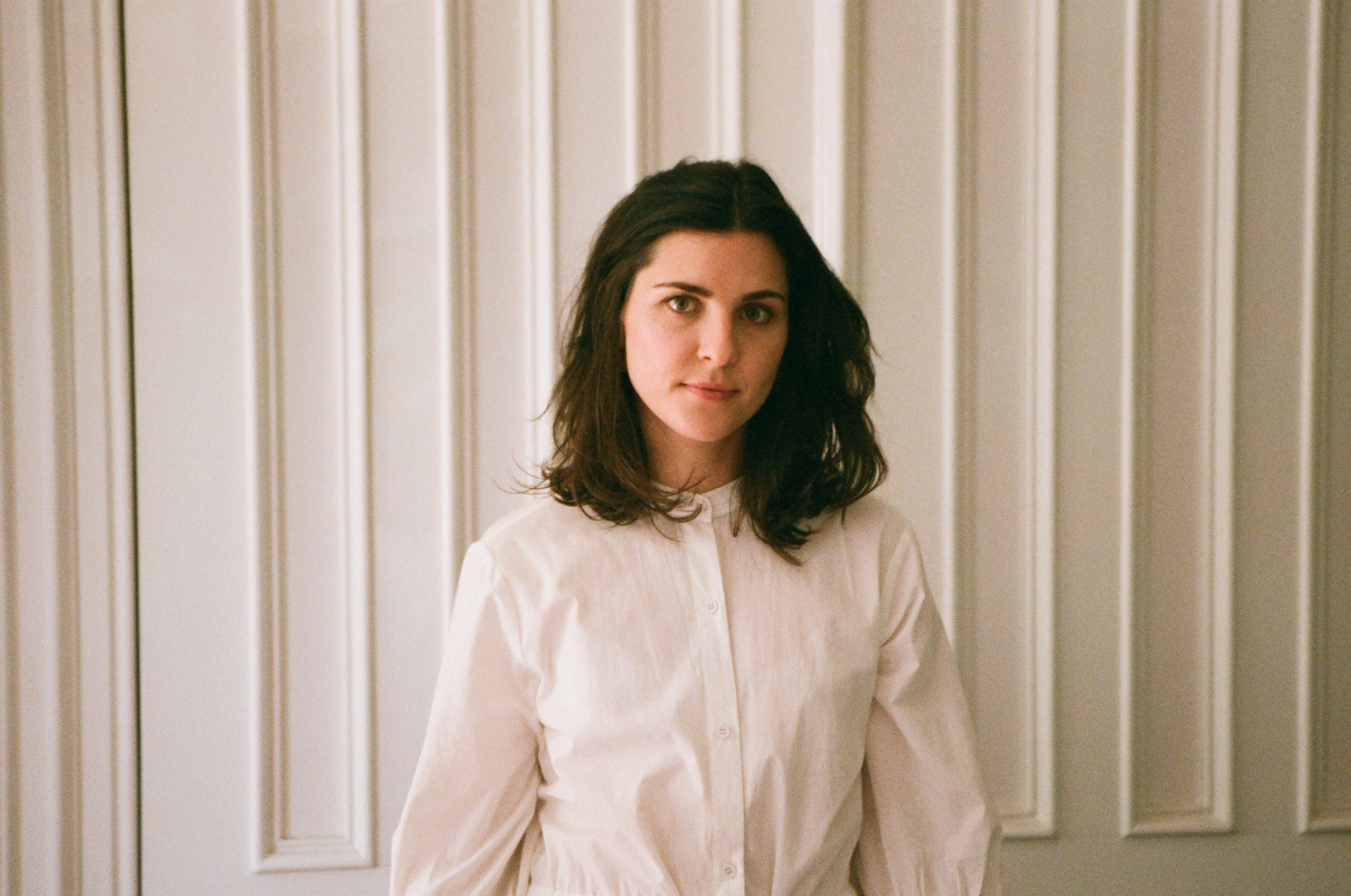 On her website (and in her new book) “Salad for President,” Julia Sherman draws connections between food, art, and experience. On the surface it’s a recipe: Julia visits the homes of artists from all over the world and asks them to prepare a salad. But really, it’s a nuanced study on where taste and story combine; it’s considering the way an artist pairs ingredients based off memory, palette (and palate). It’s how how a salad (or any isolated element in our daily ritual) can be bigger than the sum of its parts.
Amid a move to Los Angeles, we visited Julia in her current Brooklyn apartment to, actually, not discuss salads, but rather: trailblazing grandmothers; blind ambition; non-negotiables; and unexpected, yet delightful pairings (coconut and turmeric!) 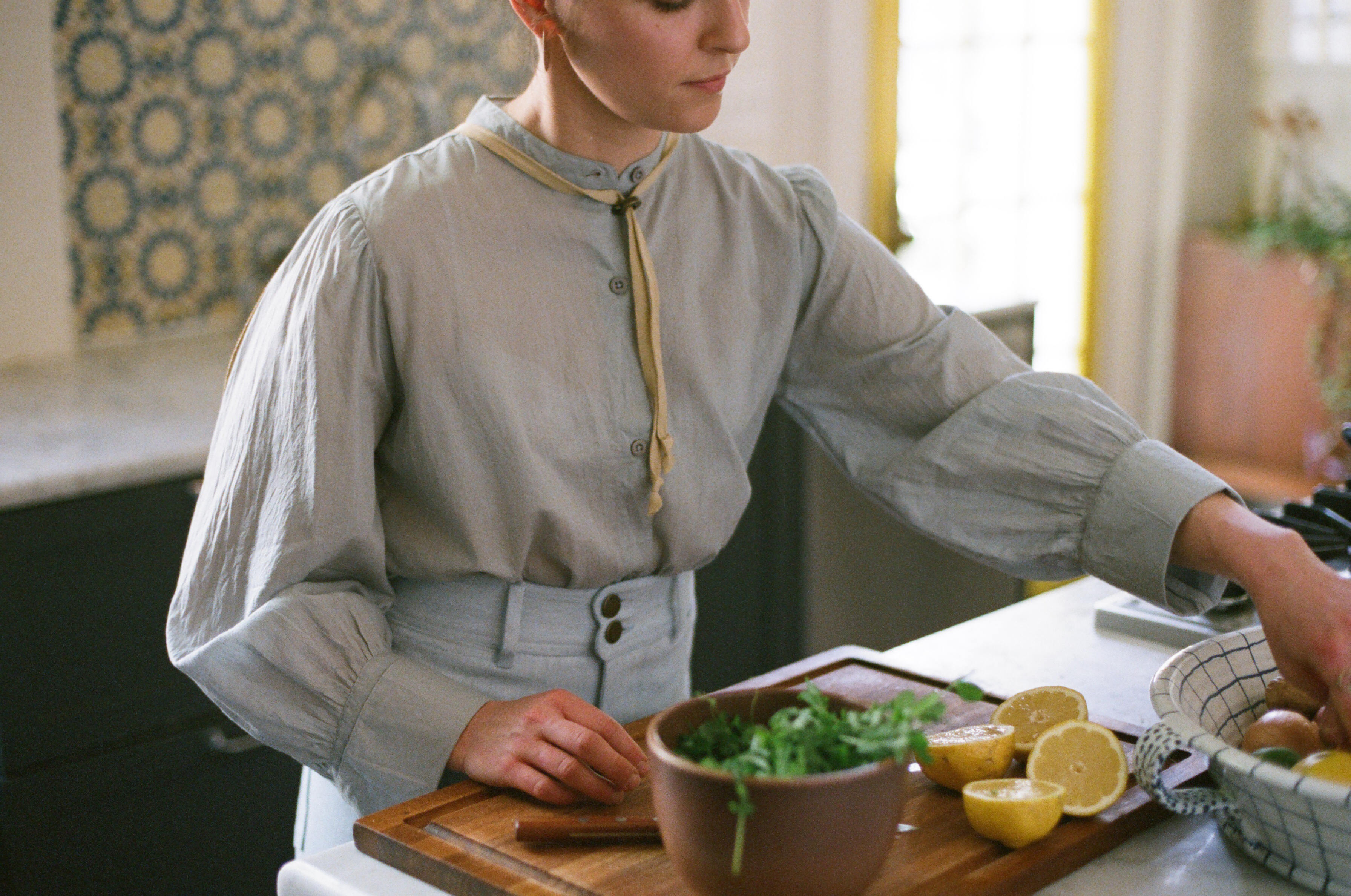 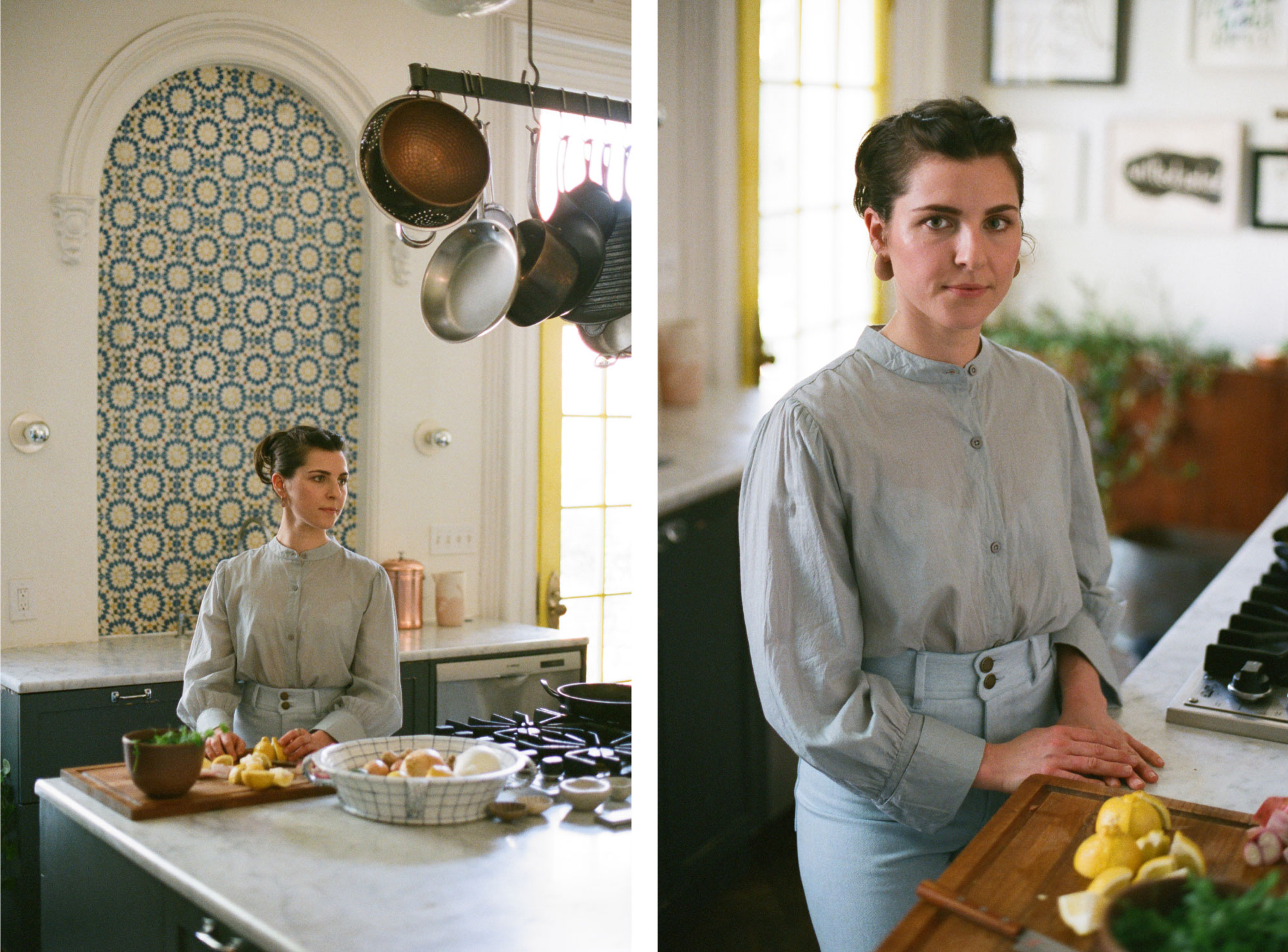 Where did you grow up? What was your childhood like?
I was born and raised in New York, and my family moved eight times on the island of Manhattan before I graduated from high school. My mother is an artist, and I was raised in her SoHo loft, where she indulged me with the most sophisticated art materials any child could have; she even took me to a foundry to cast my first clay sculpture of a demented cat in bronze.

I am certainly the product of the strong creative women in my family. My 94 year old Nana, my best friend, was a sculptor and painter. She loved to travel, and took a different job every six months so she could pack her bags and hit the road in between gigs. My maternal grandmother, Pearl Levy, grew up very poor and went to work at the age of 13. She sold her fashion illustrations door to door in the garment district, and later created a label of her own called André Fashions. She was one of the first in America to design and manufacture women’s suits, stylish office wear that catered to the working gals of the 50s and 60s. She chose the name “André” to disguise the fact that it was a woman at the helm of the business, but also to give the line a French flair. When she died, the Metropolitan Museum’s Costume Institute acquired her sketches. In my senior yearbook, my superlative wasn’t, “Most Likely To Succeed,” Or “Most Popular.” Instead, my classmates broke with convention all-together and invented a category just for me. It read, “Julia Sherman: What Are You Wearing?” My trailblazing fashion designer grandmother was proud.

What have been some surprising learnings from the process of creating Salad for President — lessons you have learned from artists, observations from your conversations...
In the transition into my current role somewhere between the worlds of art and food, I definitely learned that I am only as successful as I am happy, and I can be as destructive as I am creative. I am an overachiever by nature, which has its benefits, but it is also something to keep in check if happiness is the goal. Four years ago, starting Salad for President the website was an effort to step back from my own blind ambition, and surround myself with creative, forward thinking people whose life choices I admire. They are all people who have defined success for themselves, and it’s beautiful. Maybe I was hoping a little of their irreverence would rub off on me? Three years later, publishing my book has been a huge validation that following my gut and doing what makes me happy (eating, socializing, taking photos, hosting parties, collaborating), is my only path to “success.”

You also have a full-time job in addition to running S4P. Have you come up with any systems for how to efficiently have two jobs at once? How do you switch between two mindsets?
Well, I think I am very high functioning with an undiagnosed case of ADHD. My brain has as many open tabs as my web browser. I am used to toggling between thoughts mid-sentence, something that can be challenging for the people I work with.

I am lucky to have two jobs that complement and inform one another. When I was younger, I worked jobs that were entirely separate from my personal creative practice: I was a photographer on horror movie sets, a research assistant, an English teacher, a wedding photographer, the list goes on. Now, I finally have a job that relies on all of my ambitious projects outside of the office. Chopt hired me precisely for the perspective that my work as Salad for President brings to their restaurant. So, while I work way too much and I am only barely holding it together (particularly now as the book tour is in full-swing), all the work I do is part of the same ecosystem, and that’s a privilege unto itself. 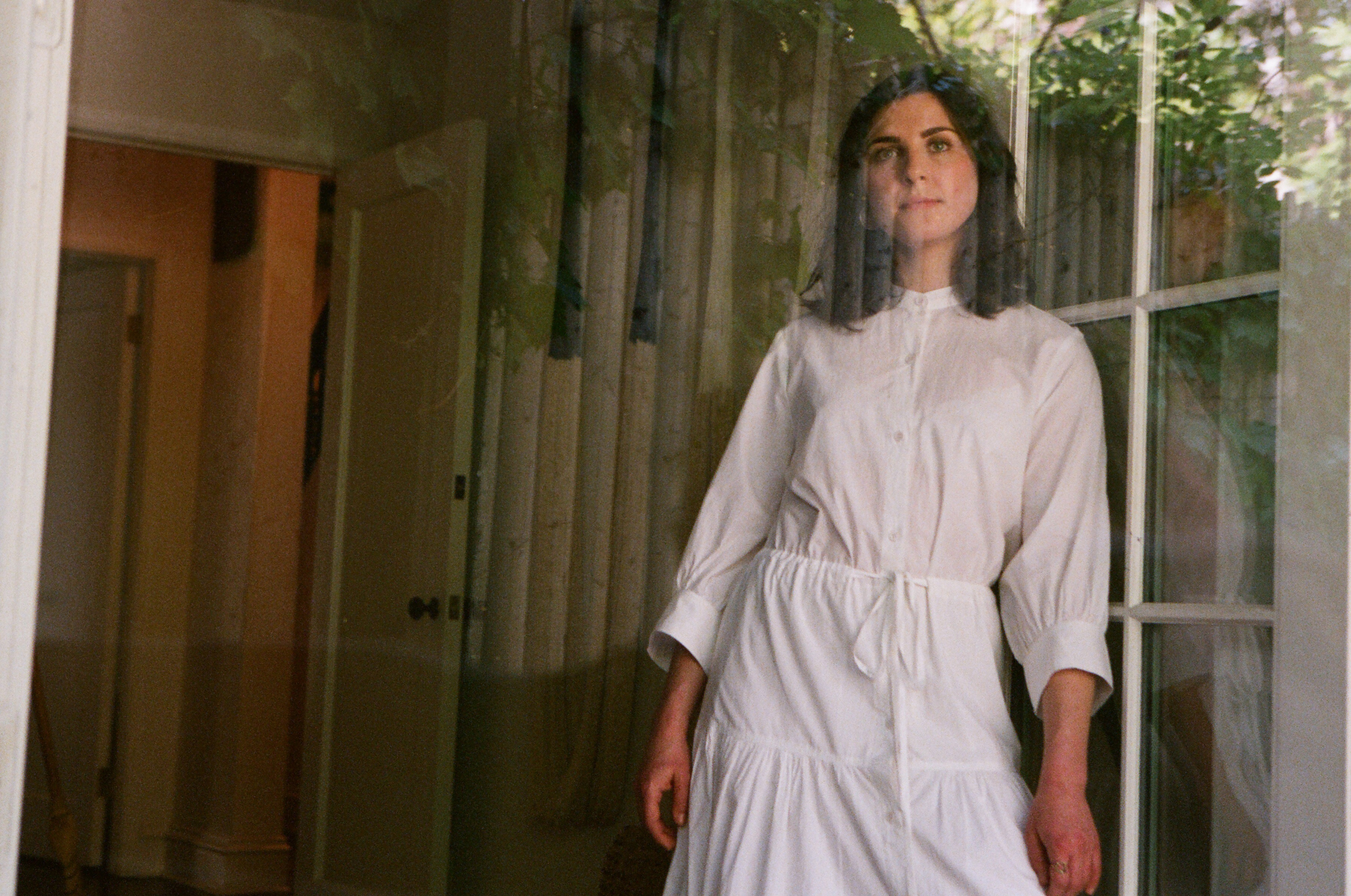 Unexpected pairings. I love learning how artists think about combining things in unexpected yet delightful ways. What comes to mind for you?
In the non-consumable camp:
Cropped pants and low heels, strong brows and red lips, day-drinking and cooking, winter and the beach, trains and window seats, dank forests and mushroom hunting, a down comforter and a chilly bedroom.

In the edible camp:
Dates and tahini, olive oil and avocados, citrus and black olives, fennel and preserved lemon, white beans and thyme, arugula and parmesan, yuzu and asian pear, coconut and turmeric...I could go on!

When it comes to your own well-being (however you define that word), what are some non-negotiables in your daily/weekly routine?
Exercise! I often feel like I am faced with the choice to eat and drink, or to exercise. When I choose the latter, I never regret it. I have a lot of manic energy, so exercise is really essential to my mental well-being.

For someone who travels constantly, I am actually a real routine person. My husband and I have come to look forward to our very uneventful Saturday schtick (when we are both in the same place) -- dog park, farmer’s market, elaborate breakfast, newspaper and work around the house. Just typing that mundane sequence of events lowers my blood pressure instantly. 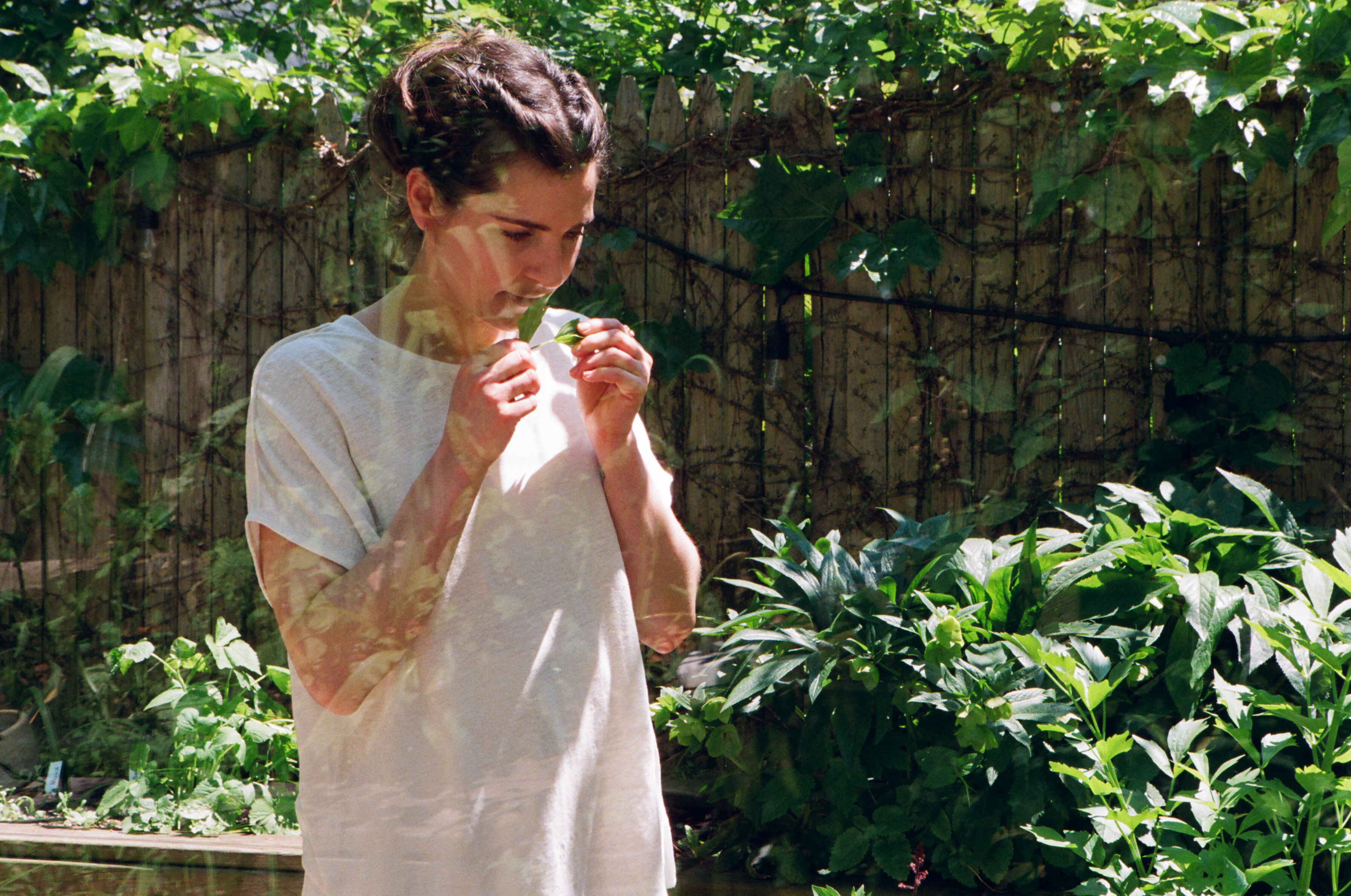 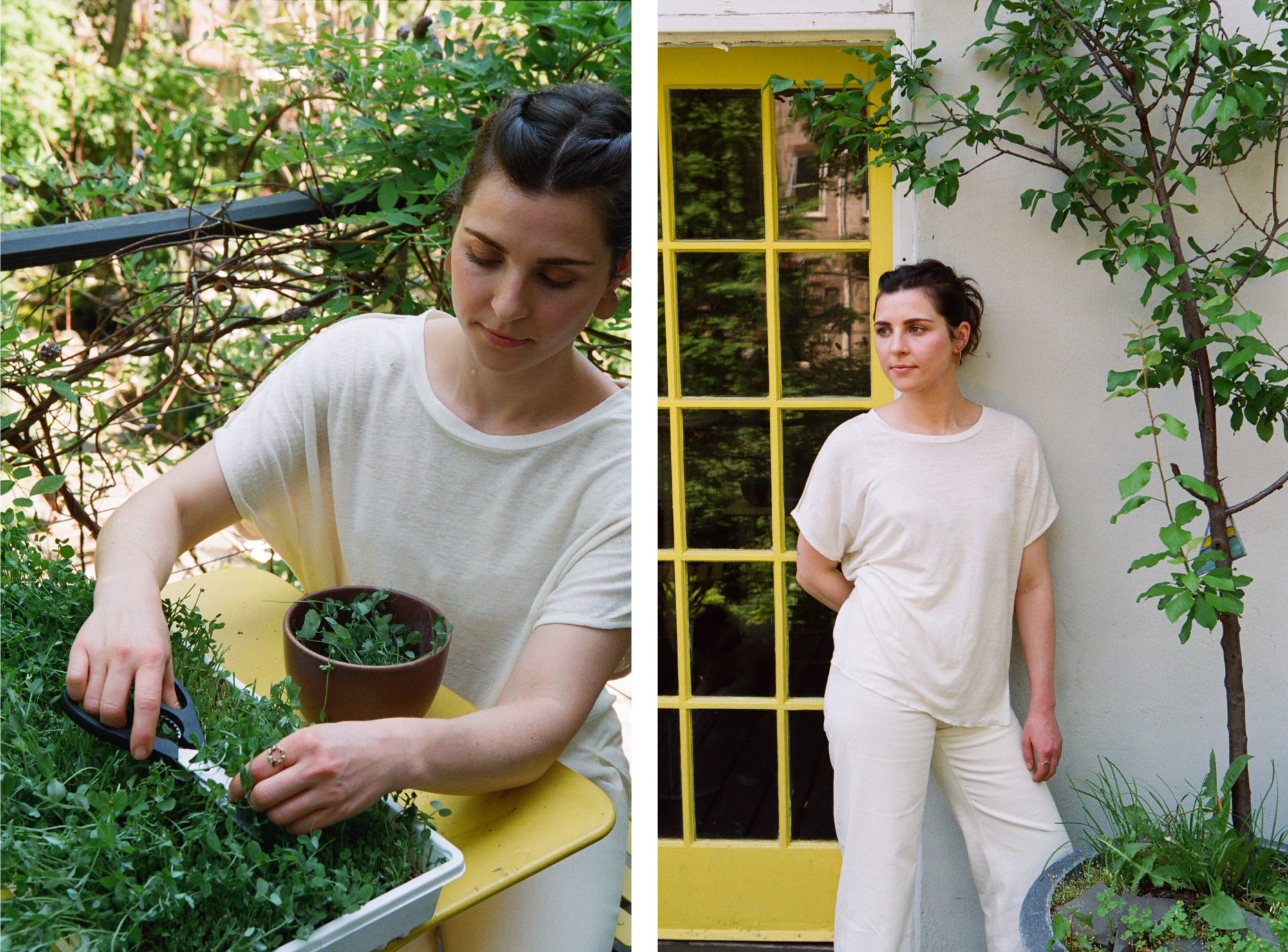 What are some cultural touchstones you consider a part of who you are today — i.e.: what specific films, books, artists, places, etc., have been most influential in shaping you?
Amy Sedaris on Strangers with Candy got me through high school. Then later, in college, my world opened up when I discovered the kind of feminist art that felt like it had a sense of humor, that it was smart and incisive at the same time -- Pipolloti Rist, Janine Antoni, Sophie Calle and Agnes Varda. There is a Pipilotti Rist video called “I’m Not The Girl Who Misses Much,” that was one of the first works of art I ever saw, and couldn’t believe I hadn’t made it myself. She is dancing around the the studio with her breasts falling out of her dress, singing “I’m not the girl who misses much” over and over again to the point of exhaustion. It was thrilling to feel so connected to someone else’s creative practice.

What makes you feel most alive?
A new idea or a new project, making new friends and connecting with strangers.