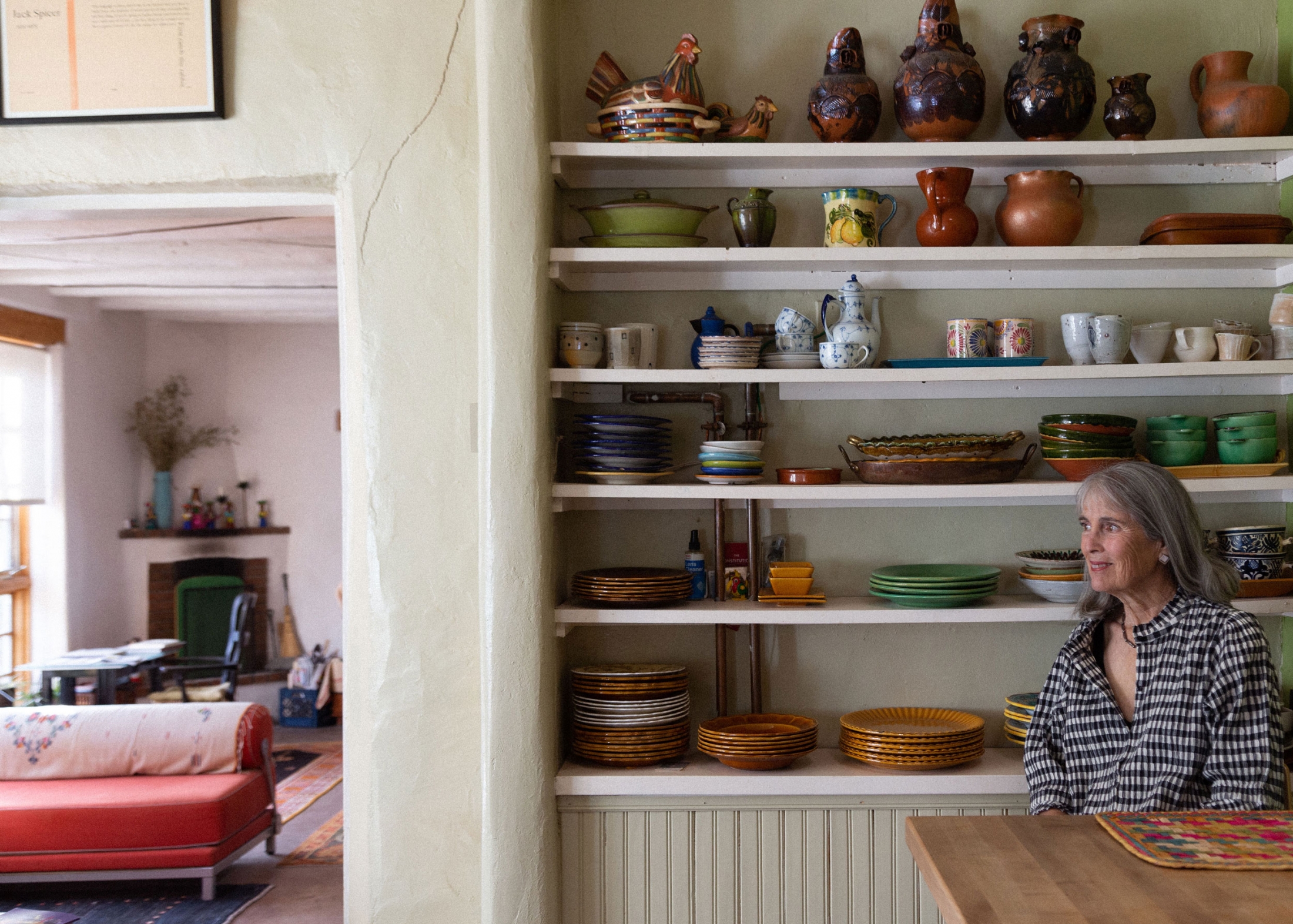 In Deborah Madison's world, food is not just a part of life, but a perspective on life itself. She writes, "food swirls around us; we reach out for some of it, other times we toss something good into the swirl for others to enjoy."

To generations of home cooks, Deborah Madison is recognized as a vanguard of seasonal, ingredient-driven, vegetarian cooking. Her iconic cookbook collection is beloved and her personal trajectory—from the San Francisco Zen Center and Tassajara to Chez Panisse, Greens, and New Mexico—is well known.  In early November, we spent a bright, cold afternoon at the home in Galisteo she shares with her husband Patrick, a painter, and their small, spirited dog, Dante. It was one day after her memoir had been published (her first following 14 cookbooks), and one week after a fitful election, but inside her thick-walled adobe home, life felt distinctly peaceful.

Her office is lined floor-to-ceiling with books about food, agriculture, botany, and California. In her kitchen, high desert light filters through the windows and a well-worn copy of In My Kitchen sits open to her recipe for black eyed-peas with yogurt-tahini sauce. Outside, she walked us through large, carefully tended gardens (a new greenhouse is going up soon). As we talked about what we've both been eating, reading, and growing lately, Deborah reflected on her years as a Zen student, why she's not a vegetarian, the monotony of quarantine, and the true value of gathering around food. 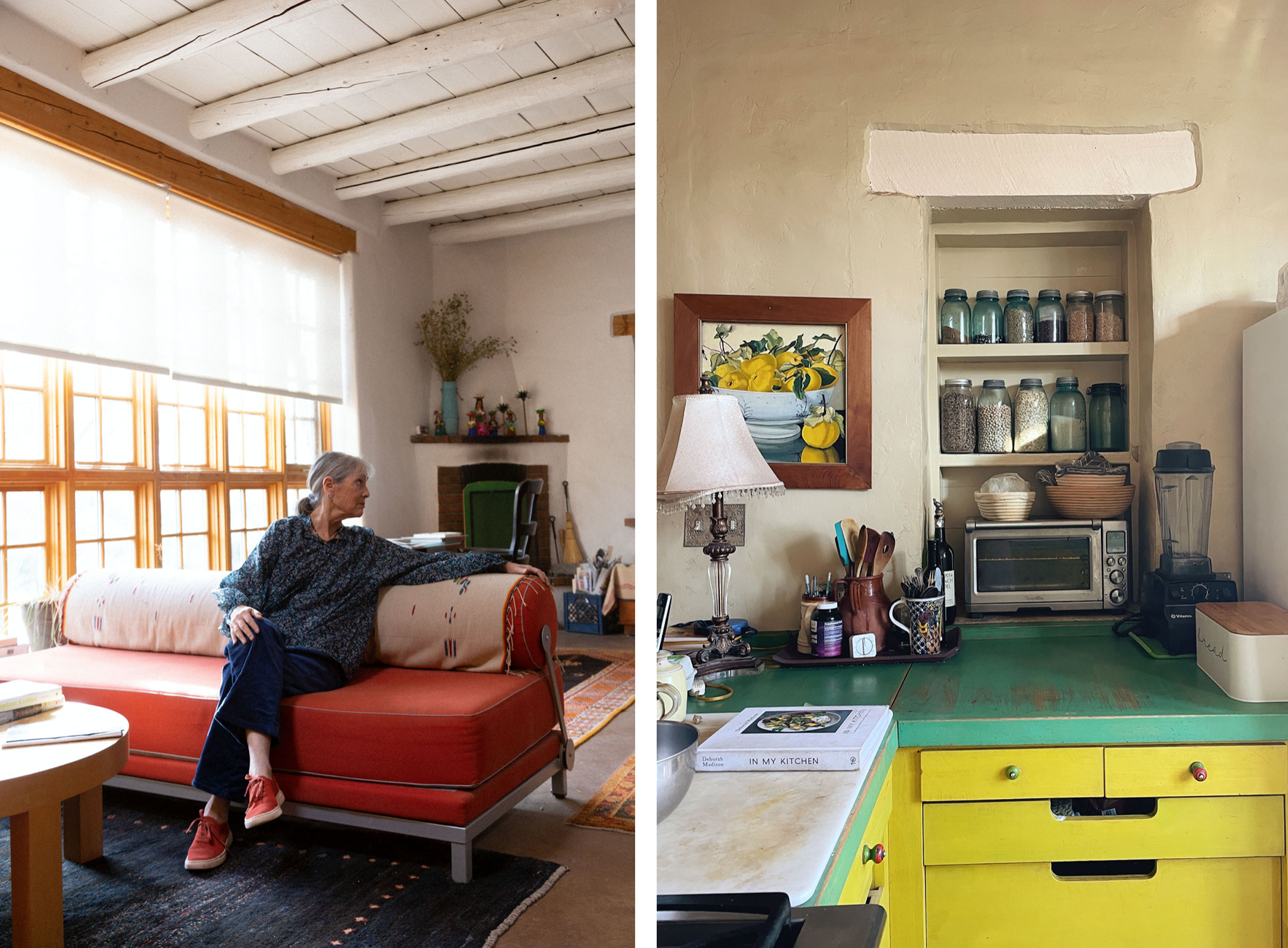 Can you describe your childhood? Your earliest food memory?
I grew up originally on a farm, and then in Davis, where we lived in the country surrounded by walnut orchards. I think once you have that in your background it never goes away. Earliest food memory? Maybe it was eating a dish of butter from our cows that my dad gave me.

You’ve taken part in - and cooked for - communities in various capacities throughout your life. What is your definition of “community”?
Community is people gathered together sharing something: some activity, some point of view. In my experience, it was always work - whether at Tassajara, or Zen Center, or Chez Panisse, or Greens, it was always work because that feeds me a lot.
It was so long ago and actually my feelings about it are very conflicted. Part of being in those communities was great. I loved it. I loved being thrown together with people whose backgrounds are so different from one another and from your own. But the emphasis in [Zen] practice was not so much on community as it was on your own effort. 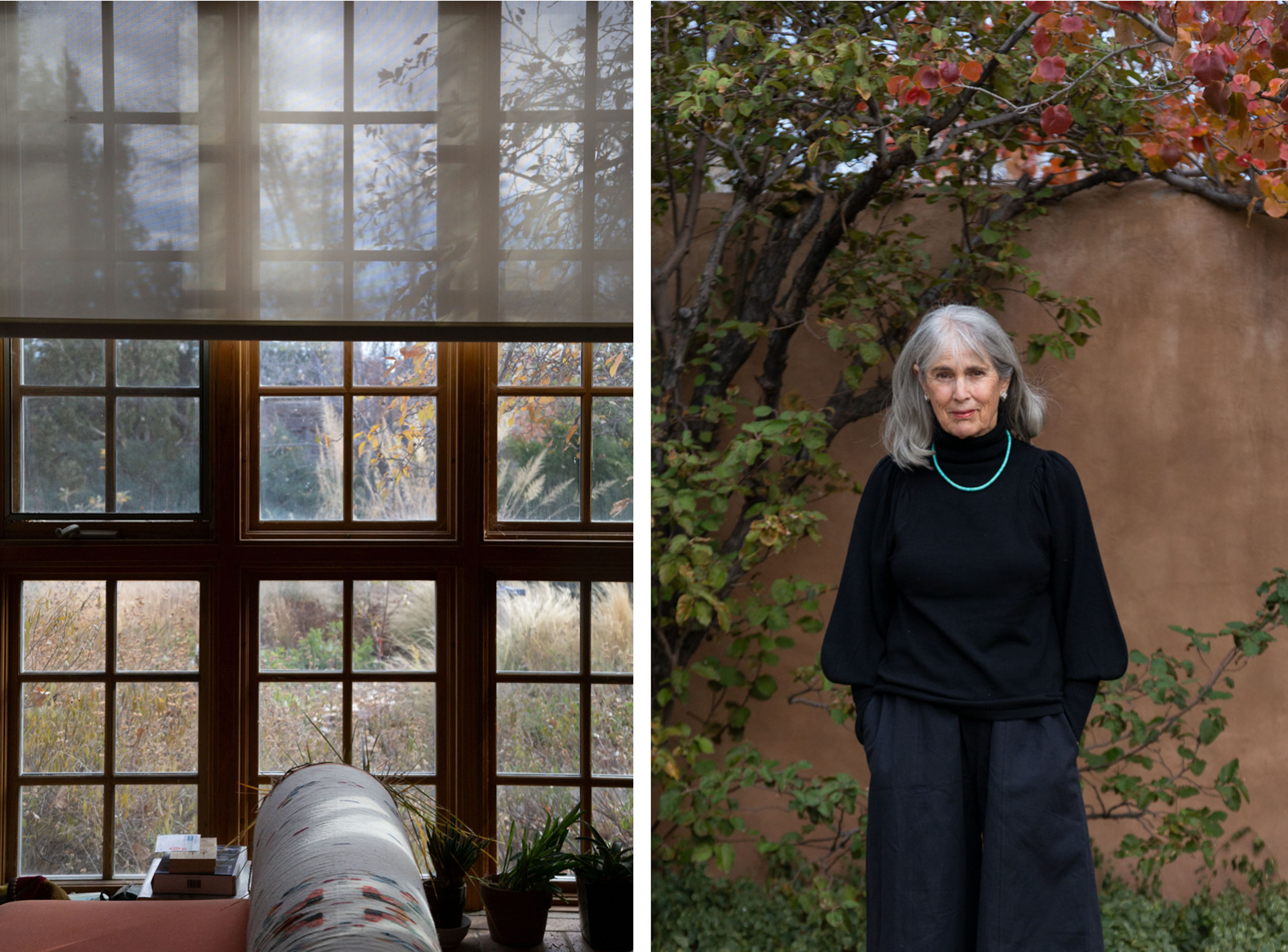 You are well-known as a pioneer of vegetarian cooking, but you’re not a strict vegetarian. Can you describe your approach to eating or overall food ethic?
I've never been able to get up on a soapbox and say, “Oh, this is the best way to eat." I can't. Sometimes, it just makes sense to say "thank you very much" and accept what's offered to you, even if it’s something you’d never buy on your own to eat.

One of the meals I describe in the book is with Ernie, who made lunch for me. He’s a cowboy, and he made this steak from Smith's that was fried in salad oil, and he made zucchini that was cooked in a stick of margarine. I didn't really want to eat this food… but it was actually very delicious. And the best part of that meal was seeing his face light when I said how good it was.

This business of choosing a diet, people think their lives are going to “work” or be perfect somehow if they just eat this and not that, so there's this huge allure to saying you’re vegan, or saying you’re this or that. Because you think you're going to get off, but you don't ever get off. There's always a cost. 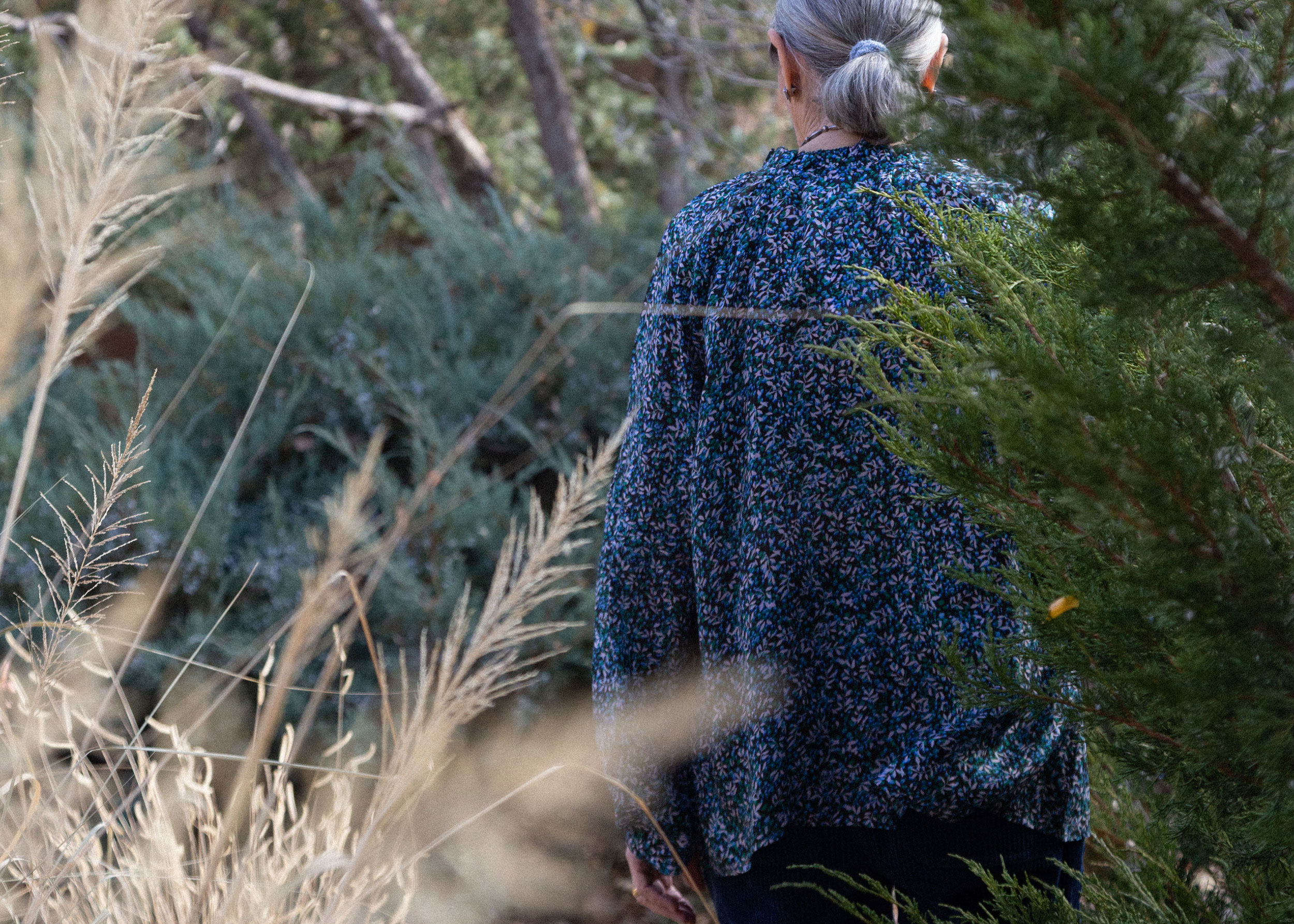 What have you been cooking during this “stay home” period?
I'm not a good sourdough baker, and it's not something I particularly care to master. But when I look at my old recipes, I'm kind of horrified - a lot of them call for so much yeast. So I've been trying to find ways to use a lot less Instant yeast. That’s been my effort in the kitchen of late. Tonight, I'm making a black eyed-pea dish from In My Kitchen that I love. I've been using my own cookbooks a lot during the pandemic, but I use other people's books too - Ottolenghi.
And Patrick [my husband], he's had his own response. Like when he said to me, "What about corndogs? Have you ever had a corndog?” And I said, "I've never had a corndog." And he said, "Could you make them?” And I said, "I'll see." So I went online - I watched YouTube. I bought some really high quality hot dogs - Niman Ranch franks - and I made them, and they were delicious! Absolutely delicious. But I never, ever, in a million years would have made corndogs, ever. 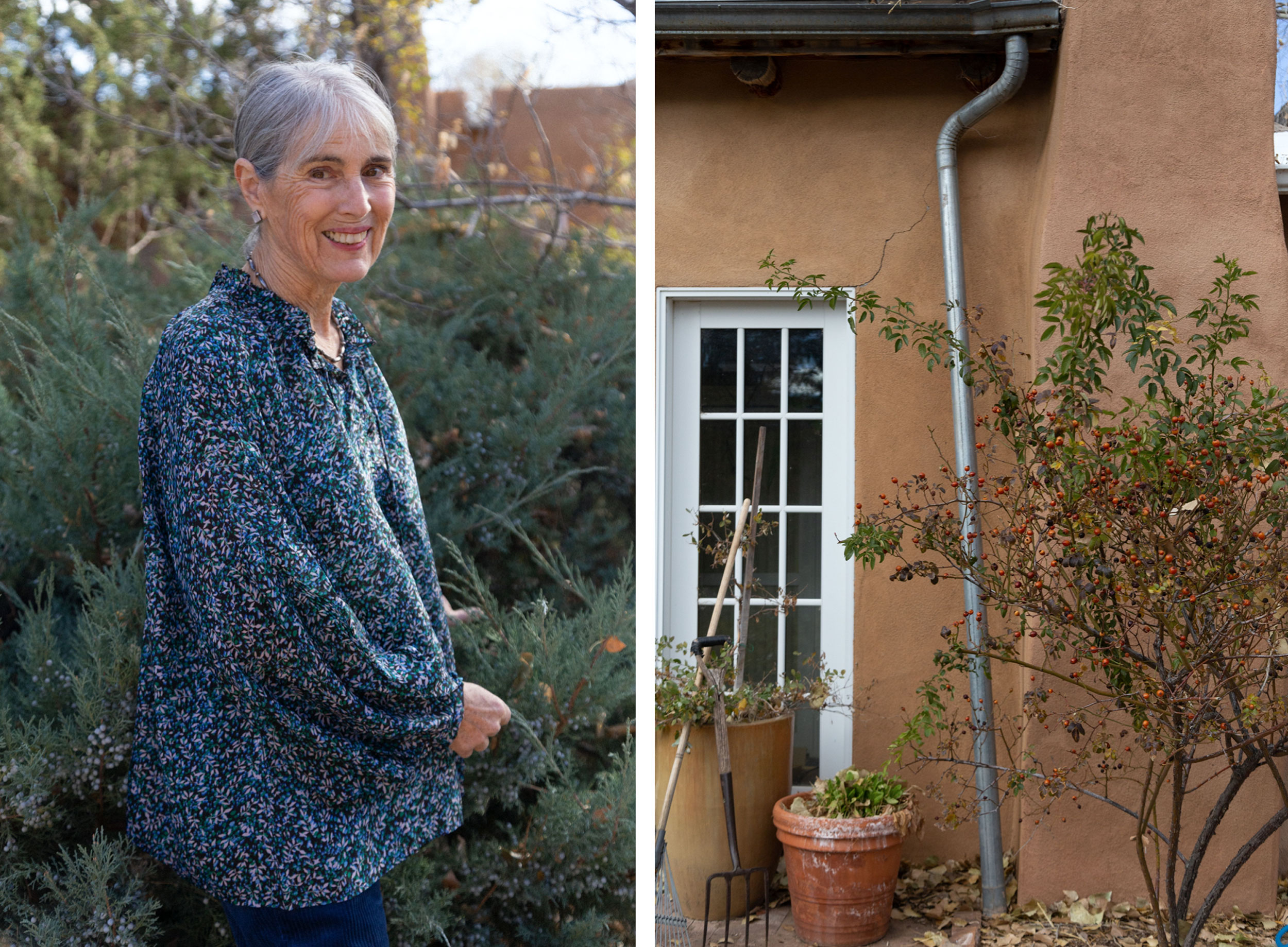 Once, I cooked a meal at home for a bunch of people who had been at an opening...all I had in the house was tomato sauce and spaghetti but we made a meal. I knew if we didn't do it then we would never get together; it was just too many people and our schedules were all too different. I went out and picked some basil because it was summer - so there were things that made it good - but it was simple, basic. Really, really basic. But we all sat down and ate together and that was really special. 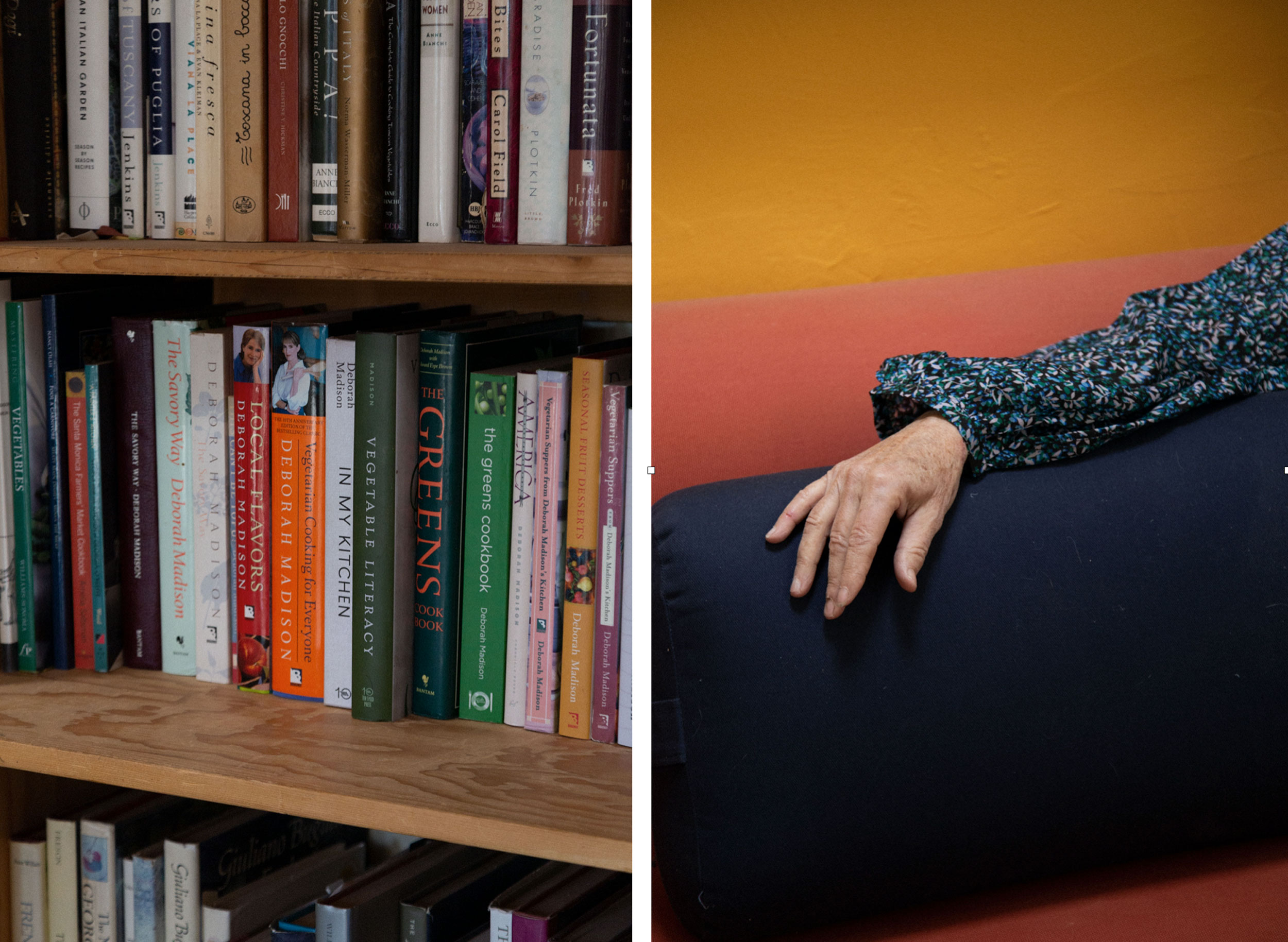 Your voice comes through so clearly in your cookbooks, and many people consider you a guide in their own kitchen. Who have your mentors been, in food or otherwise?
Gary Paul Nabhan and Seed Savers Exchange. Gary is an ethnobotanist in Tucson who I've known since 1970. I've gone with him down to Mexico to visit the Seri Indians and to drive through Baja, which was very exciting to me. He’s a wonderful resource because he knows what all of these plants are and so forth.
Also, Alice Waters. When I started working at Chez Panisse, she was so generous. Her sense of plenty and sufficiency really affected me, because I didn’t grow up with that. I don't know Alice so well anymore, but when we do talk it's intimate, it's warm. It picks up where we left off.
What is inspiring you right now?
Grains and seeing them start to appear in our culture. You can make flour out of all kinds of things - and I certainly did at Greens - but we didn't even have quinoa then. We just weren't thinking about it. But wow, it's so different now. It's so wonderful. Now, you can find rye and spelt and all kinds of things. And if you have a mill, you can get them whole and mill them yourself. I think that's very exciting. 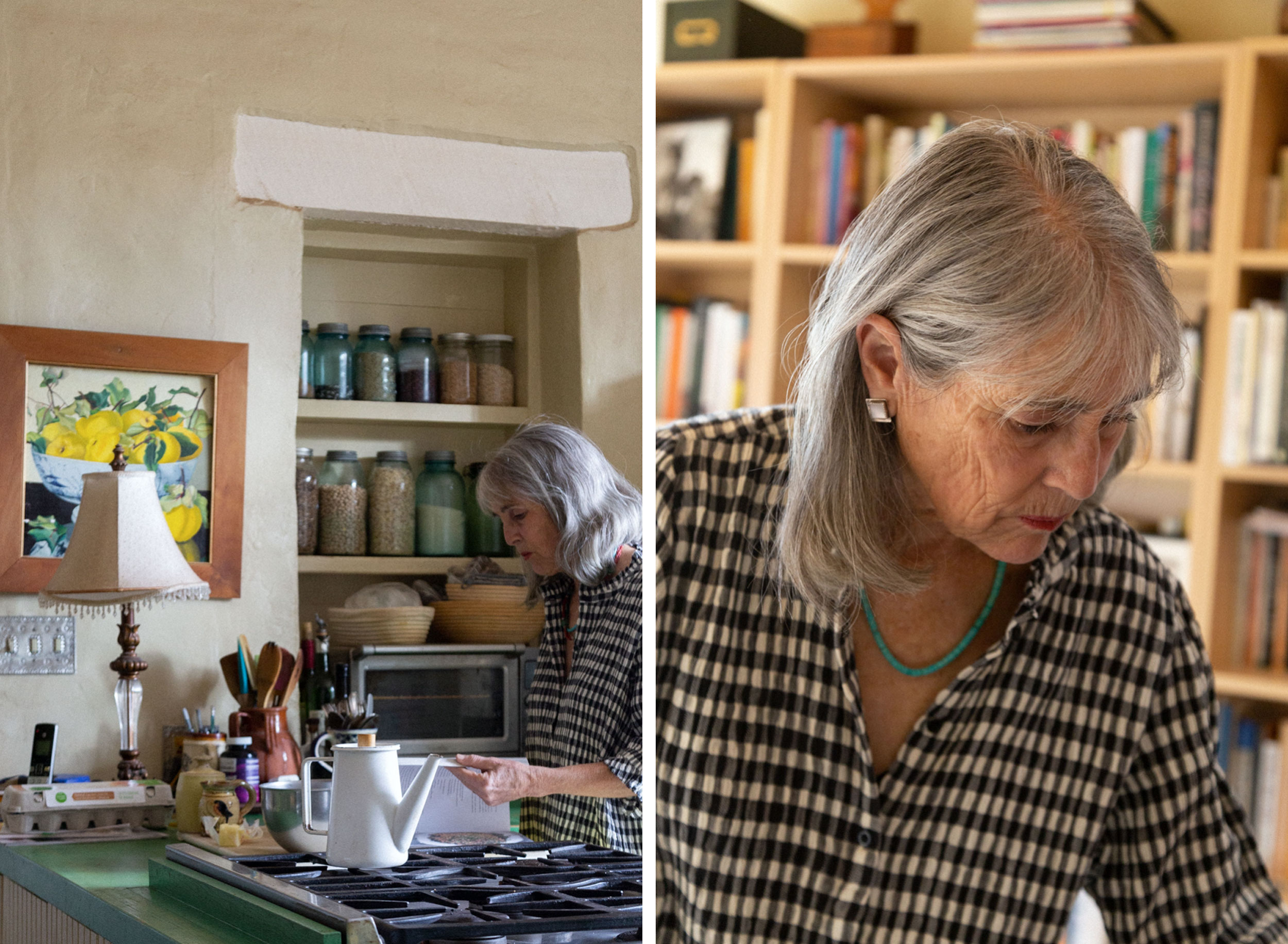 Where else would you like to live if you weren’t in New Mexico?
Mexico. Italy. I loved living in Rome because there was that sense of people who had been there for so long, the Etruscans, the Latins. It was just really powerful. I loved it. And I’ve been back many times since but to different parts. To Turin, south to Puglia, to Sicily. I just thought it was a very lively, intense, wonderful place. I was going to stay, actually. I had just made up my mind to stay when I got the phone call about the Greens cookbook. Did I want to write it? So, I went back and wrote it because I knew if I didn't someone else would, and it was really my work to tell.
Shop The Items